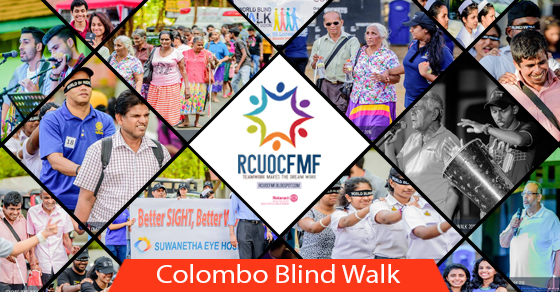 Spare a moment.
Close your eyes.


Let the darkness guide you as you attempt your everyday chores, as you try to do the simplest of tasks such as walking, putting on your clothes or tying your shoelaces. Imagine not seeing anything for the rest of your life – not the colours of the rainbow or the words on this blog – just plain, cold, familiar and infinite darkness.


Human beings are blessed with five senses; imagine for a mere second that the most important one of them is taken away from you.


Imagine a life without sight.


For 39 million people in the world and for nearly 200,000 people in Sri Lanka, a life without sight has become a part of reality, rather than a result of a few seconds of imagination. In an effort to honour their struggle and focus global attention on the blind and visually impaired, “World sight day” is observed on the second Thursday of October, every year.


This year, as a part of the international celebrations organized in light of this special day, we embarked on the “Colombo Blind Walk”, the Sri Lankan leg of the World Blind Walk, initiated and coordinated by Project Vision, Bangalore, India. Held simultaneously in five countries and fifty five individual locations including China, US, Nepal and India, Blind Walk embodies an innovative approach towards the raising of awareness for the issues faced by the visually impaired and encouraging eye donation as a means of sharing the gift of vision.


With the harsh midday sun beating down on the streets of Colombo, participants gathered around the main gates of Royal College on the 13th of October to take on the challenge of walking without vision. The concept behind the Blind Walk as developed by the founding members of Project Vision concentrates on the delivery of the very experience of being blind, where people with vision can witness firsthand the very demanding challenge of being visually impaired and therefore understand their hardships, issues and problems on a more personal level.

Upon registration, walk teams were formed, which included five blindfolded participants led under the guidance of a person of visually handicapped nature. Stumbling, nervous and holding on to each other with uncertainty, the Blind Walk was surely a challenge for the blindfolded, delivering a clear moment of enlightenment with regards to the daily battles of the blind. In the company of nearly 200 volunteers and members of the Sri Lanka Foundation for the Visually Handicapped, the walk was well over one kilometer, starting from the gates of Royal College leading to the grounds of the University of Colombo.


“I knew exactly where I was standing at the beginning of the walk, but at one point of the journey, I realized I was lost and that’s when it hit me that this is reality for some people” commented Rtr. Jayani Gurusinghe from the Rotaract Club of University of Colombo, Faculty of Science, one of the participants of the walk.


And we created a human mosaic!


Concluding the walk at the grounds, participants were eager to join in our creation of a human mosaic, also referred to as a crowd art, which consisted of an awareness symbol being created on the turf, shaped entirely out of people standing in formation. A special thank you goes out to all two hundred participants for enduring the unforgiving sun without any complaints and working with our volunteers to help us achieve our goal.


We would like to express our sincere gratitude towards Kaveen Manishka Kariyawasam, for helping us design the mosaic, Rtn. Arshad Akbar and Mr. Muhammadh Shafkhaan, whose support and expertise with regards to aerial photography and operation of the drone was indispensable in tackling this mammoth task.

And we pledged our eyes!


As a part of “I to Eye”, a community service initiative undertaken by our club together with the Sri Lanka Eye Donation Society, eye donation pledge forms were made available to participants who were interested in signing consent forms for the donation of eyes after death. With an overwhelming response of 90 signed pledges and endless inquiries pouring in, it was truly a spectacle of human kindness, and simply heartwarming to behold. As one of the biggest donors of eye tissue in the world, the caliber of Sri Lankans and their spirit of giving were yet again proved without a doubt.


Upon the distribution of refreshments, various entertainment items took to the stage. The eclectic combination of Sinhala, English, Tamil and Hindi songs performed by the participants of ‘Friends in Action’ and individuals of the Sri Lanka Foundation for the Visually Handicapped was immensely entertaining and had us tapping our feet to the beat. Several key speakers were also present, highlighting important issues such as taking action for the blind’s right to vote within Sri Lanka, and raising awareness for donation of eyes.  A special thank you goes out to JJ twins, Anisha, Renato Motha, Matheesha, all other performers, comperes and presenters including Mr. Ishan Jalil and Dr. Asela Wijedeera of Project Nethraloka.


The game stall organized by the Rotaract Club of Achievers Lanka Business School added a lighthearted pop of colour to the event, as everyone gathered around enthusiastically to try their luck. Amidst laugher, companionship and content smiles, the evening slowly faded into the night, marking the end of yet another important day in our Rotaract Calendar, leaving all participants tired, yet happy.

Our sincere gratitude goes out to Mr. Priyantha and the Sri Lanka Foundation for the Visually Handicapped, the Sri Lanka Eye Donation Society, Reverend Father George- Founder Director of Project Vision for initiating  this concept and guiding us through the phases of organizing and executing the Colombo Blind Walk, Dr. Nilantha and the Suvanetha Eye hospital for providing us stand-by medical and ambulance services, Rtn. Supem De Silva from the Rotary Club of Capital City for providing logistical support, Reverend Father Jesutha, Cinnamon Gardens Traffic Police and last but not least,  all our sponsors, media partners, participants, co-hosting clubs and their respective chairpersons, committees and all volunteers for their unwavering support extended right throughout this mission. Without each and every single one of you, this endeavor would have been next to impossible to carry out in the successful nature that it was, and effectively make a difference in the lives of many.