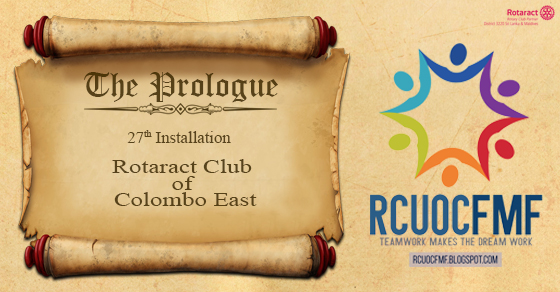 Posted at 04:39h in Installations, Others, Uncategorized by rcuocfmfadmin 0 Comments

The 27th Installation Ceremony of President Rtr. Pramoth Fernando and his Board of Directors of the Rotaract Club of Colombo East for the year 2016/17, was held on the 4th of September 2016, from 3.00 pm to 6.00 pm, at St. Peters College Rev. Sr. Flora CHF Memorial Hall. Rtr. Chaturika Wijeratne and Rtr. Dinya Godakanda attended the ceremony on behalf of our club.


The ceremony began with the lighting of the oil lamp by the Dignitaries and then the installation was called to order, followed by the Flag Salutation, Rotaract Invocation, Four-way test and the Rotaract Song. The Chief Guest for the occasion was DGN Rtn. PHF Dushan Soza and the Guest of Honor was Rtn. S. Rajmohan, President of the Rotary Club of Colombo East. The other Dignitaries included the District Rotaract Committee Chair Rtn. Sanjeewa Fernando and the District Rotaract Representative Rtr. PP Mohamed Husni.


After the warm welcome address by Rtr. Ayodhya Heenatigala, the Secretary’s Report for the concluded year was delivered by the outgoing Secretary Rtr. Dinukshi Heart, along with a short video clip which briefed their year gone by. During the past term, the club has successfully completed 24 plus projects across all avenues and was one of the organizing clubs of Rotasia 2015 as well. She also did not forget to thank everyone who supported them in uncountable ways, which helped to turn their year plans and dreams into reality and she concluded her address by thanking the key officers of Rotary and the Rotaract District Committee and signed off from her duties as the Secretary of the club.

The outgoing President Rtr. Sajeevan Veriah then addressed the gathering by recalling their theme for the last year, ‘Empowerment through confidence’. He mentioned that they made sure that the club members empower themselves for the future while building relationships with inspiring individuals around the country as well as across the globe. Also he stated that they were able to win the award for the Best Revival Club for the year 2015/16, marking a proud moment of what they have achieved and learnt together as a team.  Rtr. Sajeevan also thanked all the individuals who never failed to help them throughout the year and appreciation certificates were given to the outgoing Board, recognizing the valuable contribution rendered in the year along with a short signing off video clip of the outgoing Board of Directors.


The incoming President for the year 2016/17, Rtr. Pramoth Fernando was then introduced and collared by the outgoing President, thereby officially handing over the duties of the club.


The newly elected President then addressed the gathering, mentioning that he is humbled in having been given the honour of leading a great club and shared his experience of being an Interactor of St. Peters College, mentioning that it has molded him to be the person he is today. He expressed his sincere gratitude to Rtr. S. Rajmohan and the Rotary Club of Colombo East, the Rotaract and Interact District as well. Rtr. Pramoth also recognized the undying passion and loyalty of his Board of Directors in his speech and he ensured that together they would take the club to even greater heights in the upcoming year.


Next on the agenda was induction of the Board of Directors, which is as follows;

The appointment letters for the newly elected Board of Directors were handed over by the President of Rotary Club of Colombo East.

Next was the address by DRR Rtr. PP Mohamed Husni. He commenced his address by congratulating the new President and the members of the club and appreciating the Immediate Past President Rtr. Sajeevan Veriah for his great efforts as the revival President and initiating the journey of taking the legacy of Colombo East to greater heights. He also stated that Rotaract is a place where we get an all in one stop in professionalism, community service, friends and much more. Having seen the energy, support and diversity of the members, he mentioned that the club has the capacity to turn its mission into action and concluded his address by conveying best wishes from the District to the Rotaractors of Colombo East to continue their good work.


Then, the DRCC Rtn. PHF Sanjeewa Fernando addressed the gathering. As a past Rotaractor and a past DRR, he congratulated the Rotaractors of Rotaract Club of Colombo East for an exemplary job and the contribution made towards the upliftment of the helpless and concluded his words by the quote ‘If you want to change the world, go home and love your family’.


The key note address was delivered by Rtn. PP PHF Crishantha Herath, the third President of the Rotary Club of Colombo East. He extended his warm wishes to the Club and emphasized on the responsibilities of having the President’s collar and recalled a quote by John Adams; ‘If your actions inspire others to dream more, learn more, do more and become more, you are a leader’. He also mentioned that it is observed that people who belong to a group are happier and healthier (to the society) than others and shared his Rotaract experiences, raising handsome amounts of profits and the challenge of doing more to the society.


Next was the address by the Guest of Honour, Rtn. S. Rajmohan, President of the Rotary Club of Colombo East, who emphasized that team work is an essential factor and wished the best of luck for all the endeavours of the Rotaract Club of Colombo East and concluded his speech with a great advice; ‘At the end it’s not the years you count, but it’s what you do that counts’.

Then the Chief Guest for the occasion DGN Rtn. PHF Dushan Soza, took the podium and addressed the gathering, congratulating the newly inducted President and the Board. He took the opportunity to speak about the qualities a good leader should have and emphasized having a proper plan can achieve so many things whilst hoping the club will undertake projects that are relevant and also build a succession of leaders to continue with all the good work.


With the speeches coming to an end, the stage was opened for felicitations by the many Rotaract and Interact clubs who were present.


The vote of thanks was delivered by the Secretary Rtr. Teshan Mahendra, expressing the gratitude to the relevant personalities and thanking all those present for attending the ceremony and extending well wishes to the club as they step into the new term.


The Rotaract Club of Faculty of Management & Finance considers it a great pleasure to have been a part of this occasion and would like to convey our best wishes to the Rotaract Club of Colombo East in succeeding their dreams in bringing positive changes in the community.