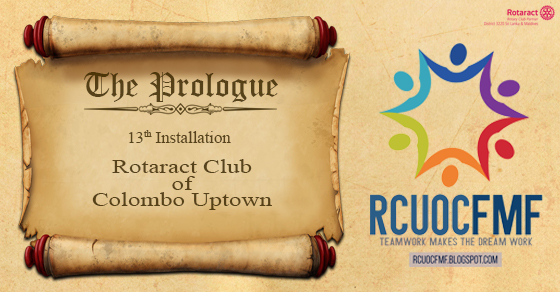 Posted at 17:18h in Installations, Others, Uncategorized by rcuocfmfadmin 0 Comments

The 13th Installation Ceremony of the Rotaract Club of Colombo Uptown was held on the 27th of August 2016, at the Laughs Head Office, Colombo. Our club was represented by Rtr. Akhila Adishwara and Rtr. Mandree Dissanayake at this glamorous occasion, where President Rtr. Yazdhan Sameer and his Board of Directors were inducted.


Charted in 1995 and revived in 2010, The Rotaract Club of Colombo Uptown has been a front runner in the Rotaract movement of Sri Lanka and has contributed immensely for its development through a number of signature projects such as “Run for their lives (RFTL)” and “Inter Rotaract Basketball Tournament”. The Rotaract Club of Colombo Uptown had a wonderful year under the guidance and leadership of the outgoing President Rtr. Sukitha Cooray, where they completed 22 projects while winning the bronze award for the best annual report and carrying out on-time reporting.


The 13th Installation Ceremony of the Rotaract Club of Colombo Uptown commenced with the lighting of the oil lamp by the dignitaries, after which the installation was called to order. This was followed by the Flag Salutation, Rotaract Invocation, Four-way Test and the Rotaract Song. Rtn. PHF PP Shaheen Cader, the current managing Director for Nielson Sri Lanka, graced this momentous occasion as the Chief Guest along with the other dignitaries, District Rotaract Committee Chair Rtn. PHF Sanjeewa Fernando and District Rotaract Representative Rtr. PP Mohammed Husni, who added color to the occasion with their presence.

After the welcome address, the Secretary’s Report for the year 2015/16 was delivered by the outgoing Secretary Rtr. Praveena Premakumar. The report provided a great insight for the successful journey of the Rotaract Club of Colombo Uptown throughout the past Rotaract year and the report emphasized on the signature projects that gained everyone’s attention. Moreover, she thanked for the tremendous support received throughout her tenure at office and expressed her warm wishes for the upcoming year as well.


Next on the agenda was the speech by the outgoing President, Rtr. Sukitha Cooray. Throughout her address she praised the hard work of her committee as well all the club members for taking off the pressure on her back in completing a successful Rotaract year. She further expressed that it was the bond of “friendship” that allowed each and every one of them to work as one individual unit through all times; good and bad. She then thanked her committee for being such a wonderful and hard working group and expressed her heartfelt congratulations and best wishes to the incoming President and his Board of Directors. The speech was followed by the giving away of several tokens of appreciation and a token of appreciation was jointly awarded to Rtr. Krishan Balaji by the Outgoing President and the Secretary.

The gathering was then addressed by the new President, where he expressed his expectations to continue the glorious legacy of his club. He thanked all the club members for trusting him with this huge responsibility and was confident of his term in office with the backing of the entire club. He also expressed his requirement for more quality Rotaractors. He congratulated the outgoing President on a job well done and expressed his willingness to start from where she has stopped.


Next, the new Board of Directors for the year 2016/17 was inducted as follows;

Next, DRR Rtr. PP Mohamed Husni addressed the audience and congratulated the Immediate Past President Rtr. Sukitha Cooray for all the outstanding achievements and wished the incoming President Rtr. Yazdhan Sameer and the newly appointed board for a successful year ahead. He also emphasized on the importance and requirement of a quality Rotaract movement, quality membership and citation requirements along with their sustainable impact on the society.


DRCC Rtn. PHF Sanjeewa Fernando congratulated the outgoing President for a job well done and praised the incoming President and wished him and his team for a wonderful year ahead. He also advised all the young people to never give up and he took the example of an eagle; who never gives up.


Next, Chief Guest, Rtn. PHF PP Shaheen Cader addressed the gathering. He emphasized on the importance of being a Rotaractor and claimed that Rotaract is a great way to sell yourself. He also expressed that many missing aspects such as leadership qualities among young Sri Lankans could be improved through the Rotaract movement. He conveyed his compliments to the outgoing President for the amazing job and wished Rtr. Yazdhan Sameer for a very successful year ahead.


The 13th Installation Ceremony of the Rotaract Club of Colombo Uptown came to a close with the felicitations followed by the vote of thanks and the National Anthem.

Rotaract Club of University of Colombo, Faculty of Management & Finance was indeed grateful to be a part of the 13th Installation Ceremony of the Rotaract Club of Colombo Uptown and would like to extend warm wishes Rtr. Yazdhan Sameer and his Board of Directors for a successful year ahead.
Written By-
Clicks By- XtreamYouth