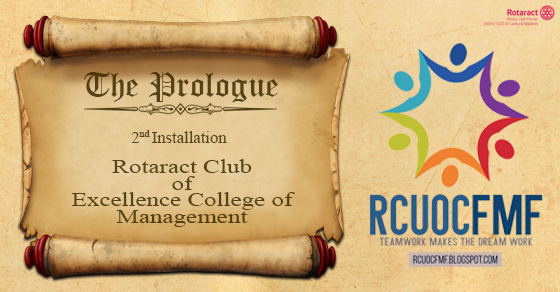 Posted at 13:21h in Installations, Others, Uncategorized by rcuocfmfadmin 0 Comments

The 2nd Installation Ceremony of the Rotaract Club of Excellence College of Management took place on the 25th of August 2016, at the auditorium of the Ministry of Tourism and Sports. The event was of grand nature with the participation of Mr. Kishu Gomes, the CEO/Managing Director of Chevron Lubricants Lanka PLC, as the Chief Guest of the evening. Our club was represented by Rtr. Dishan Leo, Rtr. Kemitha Jayamaha and Rtr. Peshala Samarathunge at this glamorous occasion.


The proceedings commenced with the lighting of the traditional oil lamp which was followed by the house being called to order and the collaring of President Rtr. Aqeel Rizni. The project Chairperson then formally welcomed everyone present to the 2nd Installation Ceremony of the Rotaract Club of Excellence College of Management by delivering the welcome address.

The outgoing Secretary then read out the Secretary’s Report for the year 2015/2016, where she took the opportunity to share with the audience all the completed projects and achievements of the club during its Charter year.


This was followed by Rtr. Aqeel Rizni sharing his experience as the Charter President of the Rotaract Club of Excellence College of Management. He emphasized on the fact that the club has reached great heights since its inception twelve months back. He also thanked all those individuals who helped him make his term of service a success.


Next up, the Immediate Past President Rtr. Aqeel Rizni collared the incoming President Rtr. Dilanka Kuamarasinghe and officially handed over the responsibilities of the club, amidst the presence of all the attendees.

Then, the newly collared President Rtr. Dilanka Kuamarasinghe addressed the gathering and introduced his Board of Directors for the year 2016/17, which is as follows.

The highlight of the ceremony was the address by the Chief Guest for the evening, Mr. Kishu Gomes. He focused on the situation of “Brain Drain” in Sri Lanka and the importance of professionals and youth actively being a part of the development of the country.


Next, the melodious tunes that were sung added more color to an evening that was already filled with glamour and excitement. This was followed by the address by the District Rotaract Representative Rtr. PP Mohamed Husni, who went on to congratulate the past Board for a job well done and wished the incoming President and his Board of Directors all the very best for an eventful year ahead.


Afterwards, the Guest of Honor and CEO of Excellence College of Management, Mr. Faris Ismail took the podium. He admired the hard work of the Immediate Past President Rtr. Aqeel Rizni in bringing the club to its current position as a newly chartered club.

The proceedings of the 2nd installation ceremony were concluded with the felicitations of the Rotaract clubs present and the vote of thanks, followed by the National Anthem.


On behalf of the Rotaract Club of University of Colombo Faculty of Management & Finance we wish Rtr. Dilanka Kumarasinghe and his Board of Directors all the very best for a successful year ahead.

Written By-
Clicks By- Felxus Labs