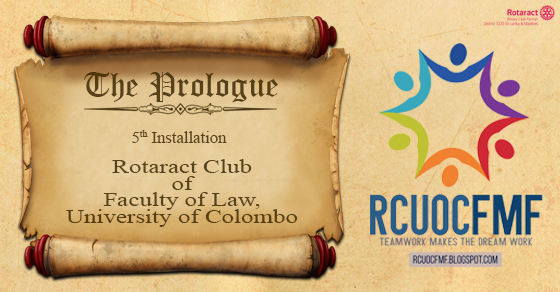 12 Oct The 5th Installation Ceremony of the Rotaract Club of Faculty of Law, University of Colombo

Posted at 02:13h in Installations, Others, Uncategorized by rcuocfmfadmin 0 Comments

The Installation Ceremony of President Rtr. Vikum Jayasinghe and his Board of Directors for the year 2016/17, of the Rotaract Club of Faculty of Law, University of Colombo, was held on the 23rd of September 2016 from 6.30 pm onwards, at the Senate Hall of the College House, University of Colombo. Registrations started at 6.00 pm and representing our club Rtr. Sapuni Senarathne, Rtr Akhila Adishwara, Rtr. Pulara De Silva and Rtr. Nimesha Dangedara attended the event.


The Ceremony commenced with the arrival of the Chief Guest, Guest of Honor and other dignitaries. The Chief Guest for the evening was Rtn. Babu Rajmohan, President of Rotary Club of Colombo East and the Guest of Honor for the evening was Ms. W. I. Nanayakkara, Dean of the Faculty of Law. The other dignitaries were District Rotaract Representative Rtr. PP Mohamed Husni, Past District Rotaract Representative Rtn. PHF. Pirrsanth and Youth Services Chair Rtn. PHF Selvarajah Maherakanth.


After the lighting of the oil lamp by the dignitaries, a moment of silence was observed in remembrance of the late Rtn. Vijayanathan Loganathan, President-elect of Rotary Club of Colombo East.


Then the house was called to order, followed by the Flag Salutation, Rotaract Invocation, Four-way Test and the Rotaract song.

After warmly welcoming the gathering, the Secretary’s Report for the year 2015/16 was presented by the outgoing Secretary Rtr. Shalanka Weerasinghe, which emphasized the achievements of the club along with a creative video clip. She was pleased to announce the completion of 24 successful projects out of which, project “Right to justice 2016” won the gold award for most outstanding community service project.


Next, the outgoing President Rtr. Hiran Geeganage addressed the gathering. He mentioned that it was indeed a very productive year as they were able to increase the number of completed projects for the year by 47% compared to the last year and the significant projects of the club “Drops of hope” and “Annual book donation” were highlighted. He thanked for the immense support and courage given by the Parent Rotary Club, Rotaract District 3220, Dean of the Faculty of Law, the Board of Directors and all the members of the club. Thereafter, special recognition were made by awarding tokens of appreciation.


After a brief introduction to the incoming President along with an interesting video clip which included admirable photographs of his Rotaract journey, the Immediate Past President Rtr. Hiran Geeganage collared the President for the year 2016/17, Rtr. Vikum Jayasinghe and officially handed over the duties and responsibilities of the club.

Then the newly appointed President Rtr. Vikum Jayasinghe addressed the gathering and thanked the Immediate Past President and his Board for appointing him to this prestigious position. Then he revealed the theme for the year, “One For All And All For One”.


Then he proudly announced his Board of Directors for the year 2016/17 which was as follows,

Next item on the agenda was the address by the Past DRR. Rtn. PHF. Pirrsanth. He shared details about the projects that the District Governor is focusing for this year, “One Million Tree Planting” project and “Drug awareness” project which is focused on a current rising problem in Sri Lanka.


Youth Services Chair Rtn. PHF Selvarajah Maherakanth next addressed the gathering. He shared some important points for Rotaractors to follow when implementing projects. He stated the importance of conducting a feasibility study before implementing any of the projects and further explained that Rotaractors need to carry out sustainable projects. Then, he congratulated the Immediate Past President Rtr. Hiran Geeganage and wished the newly appointed President Rtr. Vikum Jayasinghe and his Board a successful year ahead.


Next on the agenda, was the address by the District Rotaract Representative Rtr. PP Mohamed Husni. First, he congratulated Rtr. Hiran Geeganage and wished the incoming President Rtr. Vikum Jayasinghe a successful year ahead. Then he explained how Rotaract help young Rotaractors to become professionals and the importance of retention of members by creating the programs that will bring them lifetime experiences.

Then, the audience was entertained by a wonderful performance of “Ganga Addara” performed by some of the club members.


Chief Guest for the evening Rtn. Babu Rajmohan next addressed the gathering. First, he congratulated Rtr. Hiran Geeganage for the amazing performance throughout the year and wished the incoming President for a great year ahead and then shared experiences of his Rotaract journey with the audience.


Then, tokens of appreciation were awarded to the Dignitaries and the Immediate Past President Rtr. Hiran Geeganage.


The stage was next opened for the felicitations followed by the Vote of Thanks. Then the 5th installation ceremony was terminated and everyone was invited for refreshments and fellowship.