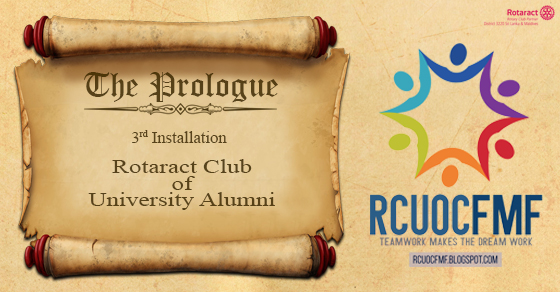 Posted at 16:32h in Installations, Others, Uncategorized by rcuocfmfadmin 0 Comments

One of the main concerns of any Rotaractor of a State University based Rotaract Club is the continuity of being a Rotaractor even after their University life is over. The Rotaract Club of University Alumni was formed with the intention of bringing together all the so called “retired” Rotaractors to continue their Rotaract journey.


The 3rd Installation Ceremony of the Rotaract Club of University Alumni was held on the 10th of September at the Royal Skills Center, with the participation of many Rotaract, Interact and Rotary members.

The traditional oil lamp was lit, followed by the usual installation proceedings of the Flag Salutation, Rotaract Invocation, Four-way test and the Rotaract song followed by the welcome speech.


Next, the Secretary’s report for the year 2015/16 was presented to the audience along with an attractive video clip to sum up all the activities of the club. It was evident that, though the club seems to be very quiet they’ve successfully completed many different projects especially in the avenue of social service. They have also actively participated in many events organized by other clubs as well.


Then, the Immediate Past President Rtr. Asiri Herath addressed the gathering and thanked the outgoing Board for their immense support. Next, an introduction to the incoming President Rtr. Nilinda Devmin was given, followed by the most important part of the evening, where Rtr. Asiri Herath collared Rtr. Nilinda Devmin as the President for the year 2016/17 and officially handed over the duties and responsibilities of the club.

The newly appointed President Rtr. Nilinda Devmin took the podium next, and expressed his sincere gratitude to all the individuals who have supported him through out his Rotaract journey. He also thanked his predecessors for entrusting him with the club and assured that he will do the best in his ability to take the club to greater heights in the upcoming year.


Subsequently, the Board of Directors for the term 2016/17 was introduced to the audience, which was as follows;

The introduction of the Board was followed by the address of the DRR, DRCC and Youth Service Chair. There was a small entertainment session before the address by the Chief Guest where Rtn. Dinali Bandaranayake Dandeniya spoke about creativity and always looking out of the box and doing something new. She also stressed on the need to allocate time for art, music or any form of activity which urge the creative section of the brain to function.

This was followed by the award distribution and felicitations by the many Rotaractors and Interactors present and finally concluded with the vote of thanks and the singing of the National Anthem.


On behalf of the Rotaract Club of the Faculty of Management and Finance we would like to wish Rtr. Nilinda Devmin Jayawardena and his Board for a successful year and though it is difficult to bring together all the members of the clubs which range from University of Colombo, University of Peradeniya and University of Sri Jayewardenepura, we hope that they would be able to have many inspiring and successful projects.