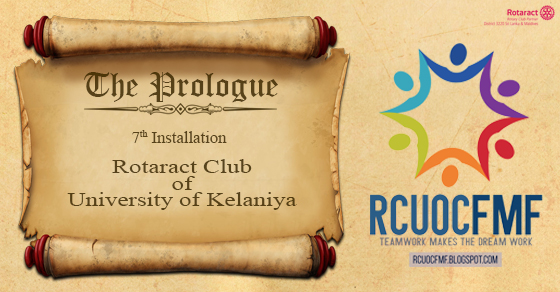 Posted at 13:26h in Installations, Others, Uncategorized by rcuocfmfadmin 0 Comments


The ceremony commenced with the lighting of the oil lamp by the Dignitaries for the evening; Chief Guest, Rtn. Nomal Wijerthne, Guest of Honour, Rtn. Sulochana Wanigasingham and DRR Rtr. PP Mohamed Husni. The house was called to order by Rtr. Malindu Senadeera followed by the Flag Salutation, Rotaract Invocation, Four-way Test and the Rotaract Song.


The gathering was warmly welcomed by the project Co-Chairperson Rtr. Radini Welewewa. Then, the Joint Secretaries for the year 2015/16, Rtr. Roshana Ali and Rtr. Yoshana Premaratne presented the Secretary’s Report for the term 2015/16, where they mentioned that the club was able to successfully complete a total of 31 projects in the past term. Some of the projects carried out by the club were; Nenasa, Piumansala, Peramaga, Green Legacy, Get your green house, Saviya, Wash for a wish, Kelaniya Premier League and Know Your Best. The Secretary’s Report was followed by a video, which gave the audience a glimpse of the club’s year gone by.

The gathering was then addressed by the President for the year 2015/16 Rtr. Thilina Nimantha, where he shared his thoughts on the successful term completed, with the dedication and the support of his Board members and all the club members. He also took the opportunity to thank the Rotaract District 3220 for the immense support rendered throughout the year. Then, tokens of appreciation were given away to the outgoing Executive Committee by the incoming President Rtr. Harindu Abeysinghe.


Then, an introduction to the incoming President Rtr. Harindu Abeysinghe was given by Rtr. Yasasi Bandaranayake followed by the most significant part of the evening, where Rtr. Thilina Nimantha collared Rtr. Harindu Abesinghe as the President for the year 2016/17 and officially handed over the duties and responsibilities of the club.


Next, the podium was taken over by the incoming President Rtr. Harindu Abesinghe and he mentioned the lesson he learnt from being a Rotaractor for the past year was to challenge himself to be better than he was. He concluded his speech by promising to take the club to the next level with the support of his Board and club members.

He then went on to introduce the members of his Board, which is as follows;

After the introduction of the Board members, the gathering was addressed by the District Rotaract Representative Rtr. PP Mohamed Husni, where he mentioned the importance of being a Rotaractor and the importance of partnering with other clubs and societies.

The floor was then opened for felicitations, followed by the Vote of Thanks by Rtr. Namendri Hewapanna and the National Anthem, which concluded the 7th Installation Ceremony of Rotaract Club of University of Kelaniya.


The Rotaract Club of University of Colombo, Faculty of Management & Finance was glad to be a part of this installation ceremony and wishes Rtr. Harindu Abeysinghe and his Board of Directors all the very best for a successful year ahead.