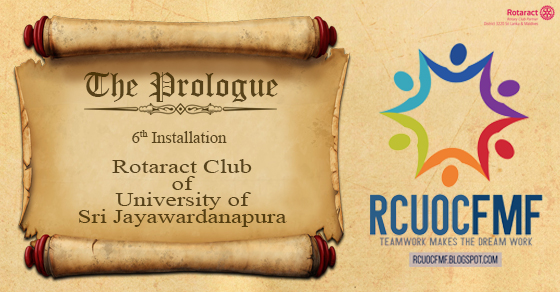 Posted at 11:58h in Installations, Others, Uncategorized by rcuocfmfadmin 0 Comments
The 6th Installation Ceremony of President Rtr. Osanda Wijesundara and his Board of Directors for the year 2016/17 took place on the 29th September 2016, at the University of Sri Jayawardanapura. Representing our club, Rtr. Uvini Liyanage and Rtr. Chamini Abeysekara attended the event.
The ceremony commenced with the arrival of the distinguished guests for the evening; Guest of Honor, Youth Services Chair of Rotary Club of Battaramulla Rtn. Nimal Wimalasooriya, District Youth Services Chair Rtn. Selvarajah Maherakanth, District Rotaract Representative Rtr. PP Mohamed Husni and the Immediate Past President Rtr. Abdul Basith Sathar.
The house was called to order and was followed by the lighting of the traditional oil lamp, Flag Salutation, Rotaract Invocation, Four-way Test and the Rotaract Song.
The welcome address was then delivered by the Project Chair Randula Senanayake, followed by the presentation of the Secretary’s Report for the term 2015/16 by the outgoing Secretary Rtr. Jinandi Kumarage, in which she expressed her happiness in completing 34 projects and gave special recognition to the projects, “Illuminate”, “I see you” and “Why Rotaract”. She finally expressed her pride about the achievements of the club for the term 2015/16, which included winning the District Gold awards for the best participating club and the most supportive club.

var cpo = []; cpo[“_object”] =”cp_widget_f7ce81e1-a05e-4917-be8a-a01593f3699a”; cpo[“_fid”] =
Next on stage was the outgoing President Rtr. Abdul Basith Sathar, who expressed his pride in the achievements of the club in the past term highlighting project “Ranahanda” as one of the most challenging, but best projects of the term. He stated that the main lesson he had learned from his Rotaract journey is that “You learn every step of the way”. He then extended his wishes to the incoming President and his Board and stated that his advice for them was to “take risks and never look back”. Then, certificates were awarded to the former Board by the Club Senior Advisor Dr. Thilini Gunasekara.

After a small introduction to the incoming President followed by a video clip on his Rotaract journey, Immediate Past President Rtr. Abdul Basith Sathar collard the President for the term 2016/17, Rtr. Osanda Wijesundara and officially handed over the duties and responsibilities of the club.
Then, the newly appointed President Rtr. Osanda Wijesundara took the stage and promised his and his Boards’ commitment towards the betterment of the club. He then took the opportunity to thank his parents, friends and fellow Rotaractors for the unwavering support they have shown throughout his Rotaract journey. He also thanked the Rotaract District and the Rotary Club of Battaramulla for their support, after which he introduced his Board of Directors for the term 2016/17, which was as follows;

Next on the agenda was the address by DRR Rtr. PP Mohamed Husni, who congratulated the newly appointed President and his Board and expressed his satisfaction with the outgoing Board. He also appreciated the work done by the Rotaract Club of University of Sri Jayawardanapura over the past five years and highlighted that the club had been known for taking risks and learning along the way. His message for the night was to “think out of the box and be innovative in whatever you do”. He urged Rotaractors to come out of their comfort zone and do things which no one imagines to do for the betterment of the world. He then took the opportunity to introduce his new initiative “Environmental Sustainability Team” to the Rotaractors present at the ceremony.

Next the audience was mesmerised by the performance of a three-piece band who performed the song “Dawasak da raa wasantha sanakeliye”.
Next was the address by District Youth Services Chair Rtn. Selvarajah Maherakanth who congratulated the newly appointed President and his Board. He then pointed out the fact that the club has an accumulation of all round talent as it comprises of members from a number of Faculties and using the management gimmick “the story of the hare and tortoise” reminded how this feature can be used for the uplifting of the club. He also took the opportunity to appreciate the parents of the Rotaractors and the advisers of the club.
Then the Guest of Honour for the evening, Youth Services Chair of Rotary Club of Battaramulla Rtn. Nimal Wimalasooriya addressed the gathering. He congratulated the newly appointed President and his Board and reminded the Rotaractors about the four way test and how it is useful for the success of one’s day to day life.

Finally, the stage was opened for felicitations followed by an invitation for fellowship and refreshments.

The Rotaract Club of University of Colombo, Faculty of Management & Finance would like to extend warm greetings and well wishes to Rtr. Osanda Wijesundara and his Board of Directors for an amazing year ahead!
Written By-
Clicks By- Xtream Youth