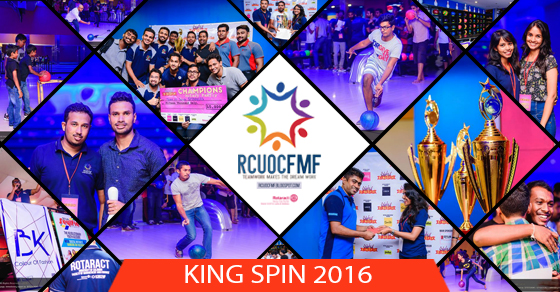 Posted at 13:30h in Avenues, Finance, Uncategorized by rcuocfmfadmin 0 Comments

King Spin, the ultimate bowling tournament of the year, was successfully held on the 29th of October 2016, at Excel World, Colombo. The event brought about a massive turnout of over 200 participants including Interactors, Rotaractors, Rotarians and the general public at large, giving everyone truly an incredible and an unforgettable experience of bowling.


This was one of the first ever projects of this scale undertaken by our club under the avenue of Finance. The main objective of King Spin was to raise funds for our signature community service project “I to Eye”, which focuses on the prevention of eye diseases and the promotion of eye donation, while at the same time focusing on promoting bowling among the Sri Lankan youth community.


The tournament took place in the two categories of ‘Rotary Family’ and ‘Public’ and contestants were therefore accommodated in two different rounds. Each team had to consist of four members of either boys, girls or even a mix of both and all rules and regulations of the tournament were made much simpler, giving all participants an even better experience of bowling. A total of over 40 teams were registered for the competition, out of which two winning teams were selected from the two categories.

Much hype was also created prior to the event on social media through a competition which got the participants to post a picture of all members of the team holding posters saying, “Post it. Click it. Win it. Spin it.” on the official event page on Facebook and the post with the most number of likes stood the chance to get the registration fee waived off at King Spin. This grabbed the attention of most participants and the excitement spread through social media as teams started constantly sharing their posts to stand a chance to walk in free with their teams.

The evening was indeed filled with much energy and enthusiasm of all teams from the beginning to the very end and of spectators who were there to witness the bowling battle. DJ DirtyFlip a.k.a. Shan-L, helped rev up the hype for the event with an array of exciting and sensational beats, keeping everyone entertained throughout the evening and giving the ultimate nudge to kick start the competition. Adding more to the entertainment factor were refreshments and especially the Photo booth by FashionLK, which certainly made the occasion more memorable and joyous.


Congratulations to ‘Team M. Town Spinners’ under the Rotary Family category and ‘Team Mofo’ under the Public category, who walked away as winners of King Spin 2016 and were awarded with a trophy and a cash prize of 15,000 LKR each.


The event would not have been successful if not for all the participants and RCUOCFMF would like to thank all teams who got registered for the event.

King Spin 2016 was one of a kind bowling competition to crown the ultimate bowling champion. So for those of you who missed out on participating this year brace yourself for a much bigger, better and a grander competition in 2017 to witness yet another bowling battle.


Kudos to our very own Rtr. Janith Senanayake and Rtr. Udanee Silva and the whole organizing team of King Spin for successfully pulling off the biggest Finance project of the year in style.