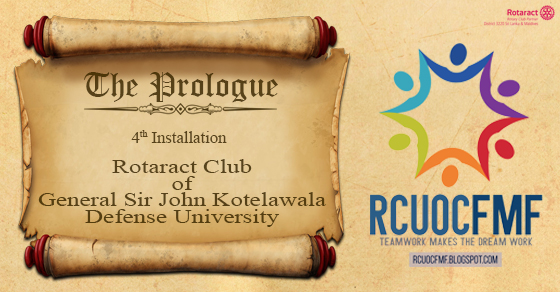 Posted at 12:19h in Installations, Others, Uncategorized by rcuocfmfadmin 0 Comments

After the registration of the many attendees, the Sri Lanka Army Eastern Drum Troupe welcomed the Chief Guests to the occasion. The installation ceremony marked its beginning with the lighting of the oil lamp by the Dignitaries, after which the installation was called to order, followed by the Flag Salutation, Rotaract Invocation, Four-Way Test and the Rotaract Song. The Dignitaries for the evening were, Chief Guest, Deputy Vice Chancellor Major General J.R. Kulathunga, Guest of Honor, District Youth Services Chair Rtn. PHF Selvarajah Maherakanth, President of the Rotary Club of Colombo Millennium City Rtn. PHF Dayanki Chandrasekara, District Rotaract Committee Chair Rtn. PHF Sanjeewa Fernando and District Rotaract Representative Rtr. PP Mohamed Husni.


After observing one minute of silence in remembrance of the heroes who sacrificed their lives to save our country, the welcome address was delivered. The Secretary’s Report for the year 2015/16 was then presented by the outgoing Secretary Rtr. Sadhika Jayasinghe, along with an interesting video clip including photographs of the events and moments they’ve shared. KDU has successfully ticked off their entire year plan completing 24 projects including their signature projects like Kuda Oya, Chronicles of Nawam, Burn phase 1 and Basketball tournament.


As per the agenda, next up was the address by the outgoing President Rtr. Kalana Jayanth. He enthusiastically mentioned that the club’s membership has expanded extensively during the past year and they have become bigger and better, successfully completing all the projects as planned. Rtr. Kalana mentioned that he learned about leadership, responsibilities and so many other things, but above all giving each member an equal chance to come forward and take up and handle projects, thus bringing out the leader in each one of them is the best thing he learnt. He also thanked the outgoing Board, all the club members, faculty advisers and parents for the support and enthusiasm.

After a brief introduction to the incoming President, the outgoing President officially handed over the duties and responsibilities to Rtr. Kushan Yapa. Then, the incoming president took the podium and addressed the audience. In his speech he spoke about his journey through Rotaract thus far and extended his sincere gratitude to everyone who has supported him along the way. He also launched the club’s theme for the year which is, “Risk, care, dream, achieve”. After assuring that he would do everything in his power to take the club to greater heights, he introduced his ever so capable Board of Directors for the year 2016/17, which is as follows;

Then, District Rotaract Representative Rtr. PP Mohamed Husni addressed the gathering. He congratulated the Immediate Past President for completing a successful year balancing studies and extracurricular activities and also the newly appointed Board and President. He also mentioned that RCKDU has actively participated in all activities and pointed out that Rotaract doesn’t do projects for awards or titles, but to make better, active and young citizens for Sri Lanka and the world.

Susequently, District Rotaract Committee Chair Rtn. PHF Sanjeewa Fernando was invited to address the gathering. After congratulating the newly appointed Board headed by the incoming President, he encouraged everyone present to dream, to achieve without quitting and to make them a reality. Later, the audience witnessed a musical performance by the members of RCKDU.


Thereafter the Guest of Honor, District Youth Services Chair Rtn. PHF Selvarajah Maherakanth addressed the gathering. He mentioned that he’s inspired by the projects of RCKDU, especially the water and sanitation project in certain selected rural areas. He then wished the new President and the Board to reach greater heights in Rotaract.

After giving the tokens of appreciation, the floor was opened for felicitations by the many Rotaract and Interact Clubs present at the ceremony. Finally, the installation concluded with the delivery of the vote of thanks by Rtr. Lekangi Perera, followed by the National Anthem. Then, the 4th installation ceremony was terminated and the attendees gathered for refreshments and fellowship.