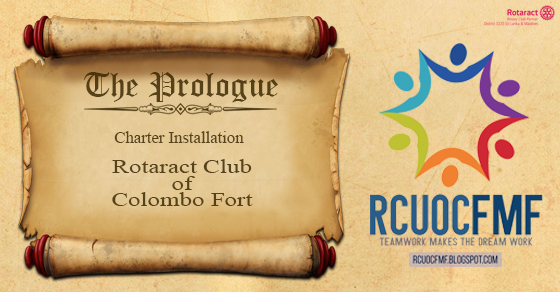 Posted at 11:58h in Installations, Others, Uncategorized by rcuocfmfadmin 0 Comments

The charter installation ceremony of President Rtr. Nuzri Munsoor and his Board of Directors of the Rotaract Club of Colombo Fort was held on the 20th of September 2016, at the Institute of Policy Studies Auditorium, Colombo 7. Registrations opened at 6.00 pm and Rtr. Shenali Fernando and Rtr. Chathun Heiyanthuduwa attended the ceremony on behalf of our club. Upon registering, each of the invitees was presented with a souvenir and a token, marking a warm welcome by the club.


The event commenced with the lighting of the traditional oil lamp by the Dignitaries, after which they took their respective places at the head table. This was followed by the Rotaract Invocation, Flag Salutation, Four-way Test and the Rotaract song.

As the audience took their seats, the gathering was warmly welcomed on behalf of the members of the Rotaract Club of Colombo Fort. Next up, an introduction to the Charter President was given by Rtr. Divaharan Sivapragasam, elaborating on Rtr. Nuzri Munsoor’s capabilities and potential, also commenting on his active past as an Interactor and a Past President of the Interact Club of Zahira College.


Then followed the most important highlight of the event, as Rtn. Nishantha Jayamanne collared Rtr. Nuzri Munsoor as the Charter President of the Rotaract Club of Colombo Fort and officially handed over all the duties and responsibilities of the club to him.


As President Rtr. Nuzri Munsoor took the stage, he addressed the gathering with enthusiasm, stating his pride and confidence in the members and Executive Committee of the Rotaract Club of Colombo Fort. Although the journey ahead may be full of challenges, he stressed his expectations to take the club to great heights. Concluding his speech by thanking their sponsor club, the Rotary Club of Colombo Fort, he introduced the Board of Directors for the year 2016/17 which is as follows;

Upon the appointment of the newly elected Board, a surprise cake was cut ceremoniously, celebrating their charter installation.


Next up on the agenda was the speech by District Rotaract Representative Rtr. PP Mohamed Husni.  He mentioned his pleasure in having yet another club joining the Rotaract movement, extending his sincere congratulations to Charter President Rtr. Nuzri Munsoor and all charter members.


Following on, Co- District Rotaract Chairperson Rtn. Hussain Khaleel addressed the gathering declaring his belief in the incoming President’s abilities and adding his warm wishes to the Rotaract Club of Colombo Fort a successful year ahead.


Then followed a Magic Show titled “Knight of Illusions”; performed by the talented, well-known magician Yasas Gunaratne, which was greatly entertaining and kept the audience excited right throughout.


The house was then addressed by the Keynote Speaker, Rtn. Dr. Rohantha Athukorala, where he congratulated Rtr. Nuzri Munsoor and his Board of Directors and shared some valuable pieces of advice from his career as a marketer with the audience.


Next, Youth Services Chairperson Rtn. Selvaraj Maherakanth and Guest Rtn. Nishantha Jayamanne, respectively took the stage, congratulating the charter Board on their appointment and wishing them well to take the club to great heights.

Tokens of appreciation were awarded to the Dignitaries and the floor was then declared open for felicitations. On behalf of our club Rtr. Shenali Fernando congratulated the newly elected President and his Board and wished the very best for all their plans in the upcoming year. The vote of thanks was then delivered by the incoming Secretary Rtr. Rafhan Akram, which was followed by the National Anthem. The charter installation ceremony was then terminated and all the attendees gathered for refreshments and fellowship.


The Rotaract Club of University of Colombo, Faculty of Management & Finance was glad to be a part of this historical occasion and would like to congratulate and extend warm wishes to Charter President Rtr. Ruzni Monsoor and his Board for an eventful year ahead.
Written By-
Clicks By- Xtream Youth