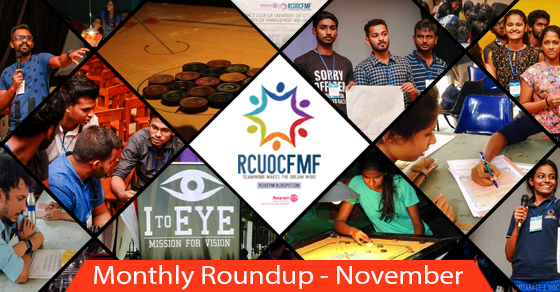 Posted at 04:35h in Round Ups, Uncategorized by rcuocfmfadmin 0 Comments

Here’s a look at how the month of November was for our club!

Game On
FMFers took part in ‘Game On’, a hand-ball tournament, held on the 26th of November 2016, at Excel World, Colombo. This event, which was organized by the Rotaract Club of Kelaniya, proved to be a day full of excitement and fun as it brought about friendly competition among the many teams that participated.

Orientation 2016
The orientation program for the term 2016/17 was held on the 29th of November 2016, at the New Arts Theatre, University of Colombo. This time around, the orientation was conducted in a way it has never been done before in the history of the club.


The programme consisted of three sessions. First, was an introduction to the Rotaract movement, which was conducted by our Club Guide Director and District Member Development Director Rtr. PP Krishan Balaji and District Club Service Director Rtr. PP Punith Gunasekara. Next, was a competition, where each team had to come up with a project proposal in line with a particular Sustainability Development Goal. This gave an opportunity to our new members to get a taste of what it is like to plan and present a project proposal, all the while bonding with each other. The last session comprised of a series of fun ice breakers and the program came to end with the distribution of awards to the respective winners of the competition and games.


The orientation was indeed a day filled with knowledge, fun and great memories to cherish and we welcome our new members to the RCUOCFMF family with open arms

‘Rotaraction 2016’ is the signature Club Service project organized by our club, which would be carried out in the months of November and December in celebration of the Sports month. All the members were divided into 4 houses, which were named after the first four Rotarians; Rtn. Gustavus Loehr, Rtn. Silvester Schiele, Rtn. Hiram E. Shorey and Rtn. Paul P. Harris.


The first of the indoor games, carom, was held on the 24th of November, at the University gym. All members were present either playing for their house or cheering the players on and after a series of competitive rounds, Paul Harris emerged the winners, with Silvester and Gustavus in the second and third places respectively.

I to Eye
We conducted yet another day of eye pledging under our signature Community Service project ‘I to Eye’, on the 14th of November 2016, at the Gangaramaya Temple. With the help of Sri Lanka Eye Donation Society, the necessary documentation for pledging eyes were made available for all the worshipers and we were extremely overwhelmed by the generosity of the many people who stepped up to donate their eyes, organs, tissue and the entire body! 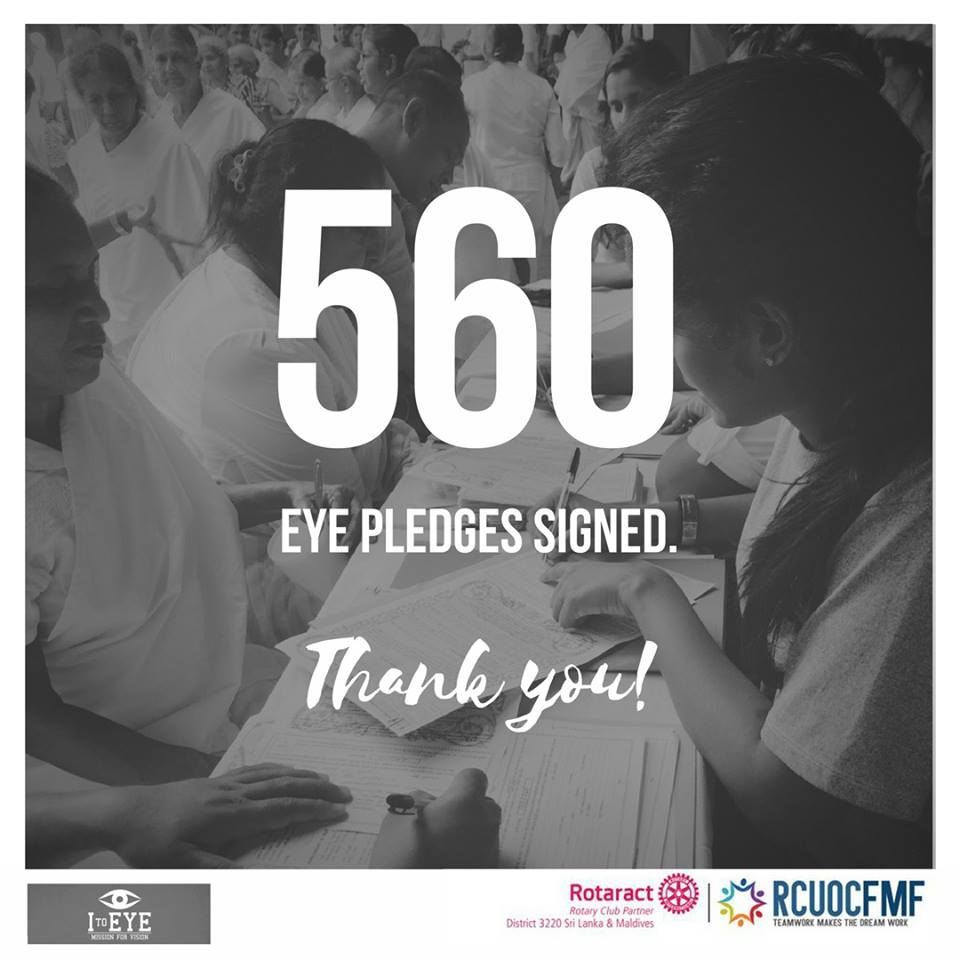 During the month of November, the blog surpassed the 30,000 view count and as of today it has over 34,000 views! We would like to extend our deep gratitude to all our readers for their support and enthusiasm and especially to our amazing club members without whom the blog would not have been where it stands today.

Here are just a few of the many external club events FMFers took part in the past month!


Flair ‘16
Organized by the Rotaract Club of National School of Business Management for the third consecutive year, Flair ’16 was held on the 18th of November 2016, at the Bishop’s College Auditorium. This was a great platform for the NSBM undergraduates as well as Rotaractors of various clubs to showcase their musical talents. Representing our club, Rtr. Harindi Jayasuriya and Rtr. Kalani Perera, along with Praveen Dias, performed a series of Sinhala songs with their own twist, which got the audience tapping their feet and enjoying every moment of it. It was most certainly a perfect combination of good people, good music and good vibes!

LISN App Launch
‘LISN App Launch’, held on the 26th of November 2016, was a great initiative undertaken by the Rotaract Club of University of Colombo, Faculty of Arts in partnership with the Enable Lanka Foundation to introduce the LISN App to the visually impaired students of the Faculty of Arts, providing a platform of equal access to information despite their disability.


Punchline
‘Punchline’,a stand-up comedy show, organized by the Rotaract Clubs of Excellence College of Management, Colombo North, Colombo Regent and Colombo was held on the 25th of November 2016, at Ananda College. Every act had their own style in bringing out humor from our everyday lives and the event proved to be an amazing experience for the entire audience, laughing out loud throughout the entire show.