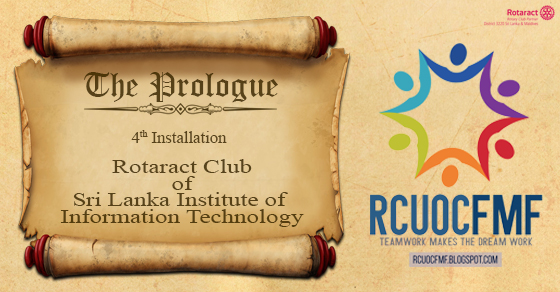 Posted at 16:09h in Installations, Others, Uncategorized by rcuocfmfadmin 0 Comments


Following the lighting of the traditional oil lamp, Flag Salutation, Rotaract Invocation, Four-way Test and the Rotaract Song, the house was called to order. Subsequently, all those who were present at the event was warmly welcomed and the Secretary’s Report for the year 2015/16 was presented, which gave the audience a quick glance at the main highlights of the last term.

Next, the outgoing President Rtr. Chathura Alawattegama addressed the gathering, where he thanked all the club members for their commitment and dedication in achieving the set targets for the year. He also extended his gratitude for their sponsoring Rotary Club for their guidance and support. He then collared the incoming President Rtr. Kavinda Bandulasena and officially handed over all the duties and responsibilities of the club.

Then, the new President was introduced along with a small video clip, which was a surprise from the club to their new President. With this introduction, the new President Rtr. Kavinda Bandulasena, addressed the gathering. In his speech he introduced the new theme for the year 2016/17 which is, “We make lives worth living” and he ensured that he, along with his Board of Directors would do everything in their power to accomplish their plans for the year and to take the club to greater heights.


Next he inducted the Board of Directors for the year 2016/17, which is as follows;

Next, the Chief Guest Prof. L.L. Rathnayake took the podium and expressed how proud he is of the success achieved by the club during the past three years and appreciated their commitment. He also mentioned that SLIIT is willing to support the club in their future endeavors.


Then, the Guest of Honor Rtn. Dr. Nalin Jayasuriya, congratulated the club for doing an excellent job in the past year and wished the newly collared President Rtr. Kavinda and his Board all the very best for an eventful year ahead. Further, he assured that the Rotary Club of Battaramulla would support the club in any way possible.


Next the floor was opened for felicitations and on behalf of our club, President Rtr. Christina Hiruni Perera congratulated the new President and his Board. The ceremony concluded with the vote of thanks followed by the National Anthem and then the installation ceremony was terminated for refreshments and fellowship.