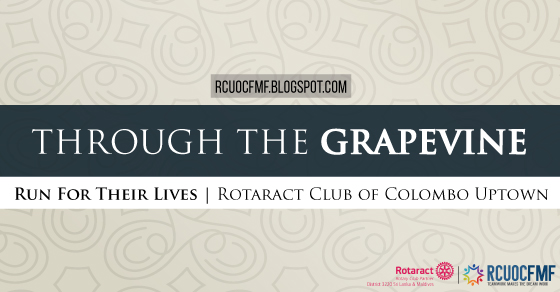 13 Dec Run For Their Lives 2016 : Rotaract Club of Colombo Uptown

Posted at 17:11h in External Club Events, Others, Uncategorized by rcuocfmfadmin 0 Comments

“Run For Their Lives 2016” successfully concluded on the 4th of December, at the Race Course Grounds, with the participation of more than 4000 participants, collecting a massive donation in aid of the National Cancer Hospital in Maharagama.

Run For Their Lives is the single largest annual charity run of Sri Lanka. The 5 km charity run was initiated in 2010, with the main objectives of raising awareness of the cancer stricken patients in Sri Lanka and to encourage the community to contribute to this benevolent cause in a much unconventional manner. Starting from modest beginnings in 2010, in the last 6 years RFTL has managed to raise and donate medicine & equipment worth of approximately Rs. 14 Million to the National Cancer Hospital in Maharagama.
Over 4000 participants attended RFTL this year and the 5 km route was filled with quick games and photo booths for those who attended the event, making it enjoyable for all participants.
One of the main pulls of RFTL 2016 was the carnival comprised of a number of fun filled games, mingled in with an atmosphere of sound music from bands and Djs. Premises accommodated a variety of stalls ranging from food and beverages to stalls dedicated to different causes with the intention of raising awareness of other important issues.
Thanks to the aggressive publicity given by social media and electronic media for this worthy cause, RFTL was extremely successful in spreading its message, purpose and the awareness which resulted in raising funds for the fight against cancer.
Rotaract Club of University of Colombo, Faculty of Management and Finance wishes to congratulate the Rotaract Club of Colombo Uptown for successfully carrying out RFTL for the 7th consecutive time in a much bigger scale, to instill hope in the lives of the less fortunate patients of the Maharagama Cancer Hospital.
Written By-
Clicks By- Xtream Youth