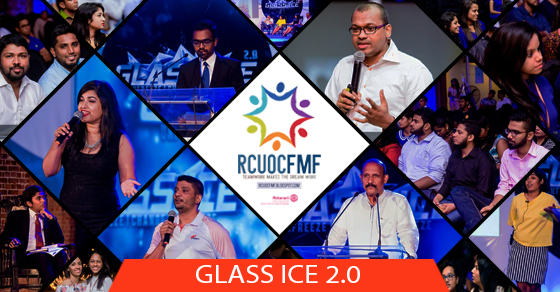 Glass Ice 2.0, the signature professional development project of our club, was held on the 2nd of December, 2016 at Trace Expert City, Maradana.


‘Glass Ice’, which was awarded the most innovative project for the term 2015/16 at the 26th Rotaract District Assembly, had touched and guided many souls to achieve greater heights in their lives. Hence, it was the duty of the club to not only bring another set of individuals to the same light, but also to help individuals re-strategize themselves through Glass Ice 2.0. The program thus focused on empowering and inspiring individuals to be innovative and persistent entrepreneurs and leaders who would someday write their own story and create their own unique brand.


The evening was graced by the presence of five inspirational personalities, Shanuki De Alwis, Creative group head, TBWA; Irfan Ahmed, Founder of Innovation Quotient; Lonali Rodrigo, Founder of House of Lonali; Rohan Jayaweera, COO, Antyra Solutions and former Google country consultant for Sri Lanka and Major General Kamal Gunaratne, former commander of Wanni and the author of the best seller “Road to Nandikadal”, who shared their personal experiences which acted as change agents to the lives of those who were present at the occasion.

Shanuki De Alwis – “Never say no”
The first speaker for the evening was Ms. Shanuki De Alwis, who is the creative director at TBWA, a well-known stage actor and TV personnel. She started the session by putting forward one of her own life experiences to which we as Sri Lankans can most certainly relate to.


“I wanted to be a boy, because being a girl, whenever I asked my parents whether I could do certain things boys did frequently, I always got a ‘NO’; a ‘no’ and ballet lessons”


Through this example, she painted a realistic image of the environment in which a typical Sri Lankan would grow up and continue to live for the rest of his life. An environment where we are bound by a set of norms and pre-determined gender roles, which thus end most of us in a situation where we no longer have an idea about what we’re doing and what we really need to do.


She then gave the audience a taste of the roller-coaster ride in her life, with numerous twists and turns. She explained how aimless her life had been from selecting to do Science for Advanced Level and subsequently giving up so that she could pursue her passion at the Shakespeare Drama Competition; a reality most of us can relate to. She explained how this and the subsequent marketing career she landed in had made her open herself to flexibility, which then opened new doors for her. She explained throughout the session that it was alright to have no idea about what you want to be or how you’re going to achieve what you want; a reality we all dread about, as long as we keep on exploring and taking chances.


She ended her speech encouraging the audience to open themselves to opportunities and not to hesitate at any point as success is never served in a silver platter and the only formula to success is a trial and error mechanism.

The stage was then open to the 2nd speaker of the evening, Mr. Irfan Ahamed, the founder of Innovation Quotient. Irfan has over 18 years of experience across marketing communications, digital marketing, product development and innovation management. Beginning his career at Grant McCann Erickson and subsequently JWT, he focused on building brands in diverse industries such as telecom, financial services and FMCGs and left the industry after 12 years as the Vice President at JWT. As the Head of Marketing, he led his team and was an instrumental part of the launch of eZcash, anything.lk and wow.lk. Prior to becoming a fulltime entrepreneur, he was the Director – Innovation and Insight at MAS bodyline.


He started his speech with a well known quote from William Shakespeare;


He explained that every story has a beginning, a middle and an end, and all of us are living a story. While most of us follow someone else’s script, some of us write our own, even after a while.


He then went on to explain how we can write our own story. He explained that all of us are different from each other and in order to write our story we need to know our uniqueness. The next step is to create our personal brand. Traditionally, who a person is was determined by factors such as the education level, religion, schools they’ve attended, career etc. However, we live in an exponential world, where our brand depends on the difference we are making. He went on to say that it was important to not let people define you, but focus on your own personal brand and create your own brand, as people today simply buy other people and sell themselves and only your personal story; a dynamic will sell you. He further proved this using the stories of 3 young entrepreneurs; Ganindu, Kurt and Daniel who wrote their own stories and used it to win their lives.


To end his speech, he gave five quick points to the audience.

Lonali Rodrigo – “Sustainability”
The next speaker for the evening was Ms. Lonali Rodrigo, the founder of ‘House of Lonali’, an organization which transforms and up cycles unwanted luxury textiles, trims and clothing into stunning, original, wearable art.


She explained that, people wanted more when they were spending simple lifestyles and hence made their lives complex and then to relax in a complex life, tried to make their life simple and in this continuous cycle people overused resources, thus creating a problem of saving for the future generations. As a result, it is important to ensure sustainability.


Bringing examples from her own life, she explained how sustainability guides people to success. She started her journey in a sustainable path when she was just 13 years old. At that age, she used to up-cycle old clothes, unknowingly doing something sustainable. As her first project as a fashion designing student, she had to do an ethical collection. For this, she used a waste material which many wouldn’t consider eligible; labels. All these life experiences made her think ‘what can be done for sustainability?’ after graduation. After a research, she realized that the textile industry was the 3rd largest polluting industry and in this simple fact she saw an opportunity, thus making her the sustainable entrepreneur she is today.


Her solutions for a sustainable industry, which are the foundation of her own business were,

Her final advice to the audience was to get the waste, think creatively and make a sustainable product.


Rohan Jayaweera – “Entrepreneurship and Innovation”
Next speaker in line was Mr. Rohan Jayaweera, COO/Director of Antyra Solutions (pvt) Ltd and the former Google country consultant for Sri Lanka and Maldives. He started his speech defining an entrepreneur as,


“a greater fool, who believes he can succeed where everyone else had failed”


In his short, but interactive and informative speech, he explained three things he had learned through his own life experiences which can guide you towards success.


In his speech, he laid out the strategies which converted the Sri Lanka armed forces to a victorious army after once being a running army.

Although coming from a military background, it was clear to the audience that these factors indeed could bring success in a day to day context. He ended his speech remembering the fallen heroes.


The 2nd session for the day was an interactive panel session moderated by Mr. Chathuranga Hapuarachchi, who was joined by the 5 speakers and Prof. Jim Garrison, professor at Ubiquity University. The questions and answers were as follows.

Q – How important is it to take your stand and do what is right?
A (Shanuki) – It always depends on conscience because we need to deal with people’s ideas that we don’t agree with. That is the only situation you should say ‘no’ as every action you take defines you as a person.


Q – How important is discipline?
A (Maj. Gen. Kamal Goonaratne) – It is one of the most important things. Every man has a self respect; everyone should hence be respected to gain respect.


Q – Do you find yourself adhering to a system?
A (Rohan) – Systems are important in a broader way as everything is dynamic today. But no, I don’t adhere to a system.
A (Lonali) – Systems are important if they’ve been made according to individual needs.
A (Irfan) – Not having a system is a system. Every industry is about driving creative chaos. Hence to get better around every iteration a system is necessary.


Q – How can you assure that there’s hope for education?
A (Prof. Garriston) – Education is not that broken. It is just that it’s not relevant to the world we learn. The reality is that degrees no longer ensure jobs. Around 50% of the college graduates are unemployed or underemployed giving rise to the need of training and entrepreneurship.


Q – Do you think the students have the ability to fight in the job market?
A (Prof. Garriston) – Yes, if the proper training is given. The only permanent solution however, is to be an entrepreneur.
A (Rohan) – Right to criticize occurs only when you have a solution. So the system cannot be criticized. You just need to live with the consequences.


Q – How important is it to have an idol in your life?
A (Shanuki) – We try to be like someone else and loose our own identity. It’s good to look up to someone, but we need not imitate that person.


Q – Any message to the audience?
A (Lonali) – Believe in something, start pushing yourself, work hard and never lose interest.


Q – What do you think about the fact that people regret their decisions?
A (Maj. Gen. Kamal Goonaratne) – Once a decision is made it’s made. Don’t regret. Find a way to correct it.


The club would like to thank all our sponsors and congratulate the co-chairs of the project Rtr. Dishan Leo, Rtr. Haresh Wijayanayaka and Rtr. Amaya Karunaratne on a job well done.