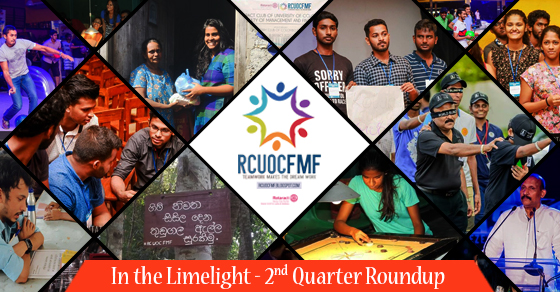 Posted at 06:00h in Round Ups, Uncategorized by rcuocfmfadmin 0 Comments

October through December were three busy months which were nothing short of fun, excitement and many new experiences for all the RCUOCFMFers. Amidst our finals, we were able to successfully complete about 10 projects in all 6 avenues and here’s a look at all that happened in the 2nd quarter in detail!

T.R.R. Rajan Cricket Carnival
The most coveted Cricket Festival, T.R.R. Rajan, was held on the 8th of October in Kandy for the 13th consecutive year. More than 25 teams took part and Team FMF was able to go up to the semi finals owing to their exceptional performance and team work. Further, the best bowler of the tournament was awarded to our very own Rtr. Charith Kumarasinghe and we would like to extend a big congratulations to our entire team for making us proud! 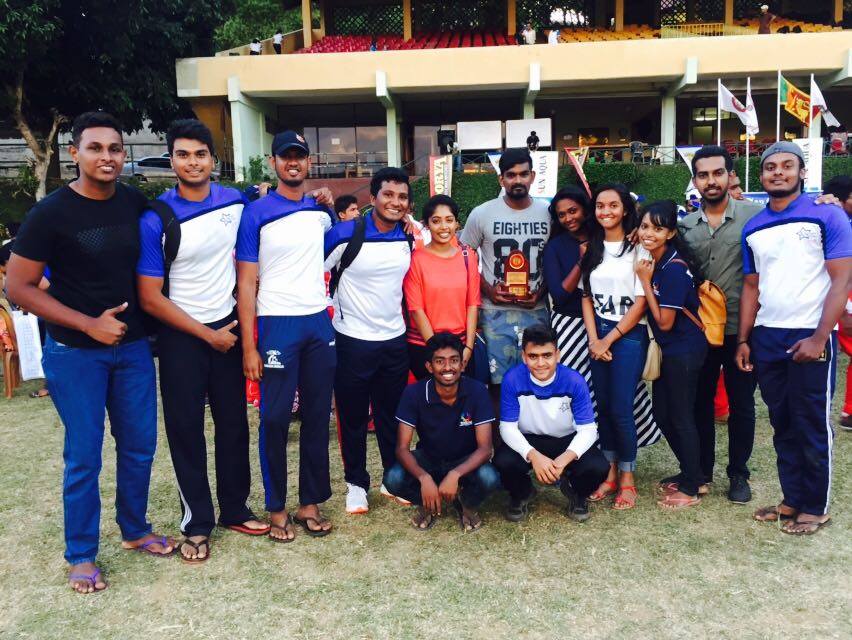 Blind Walk
Organized as a part of the international celebrations for the “World Sight Day”, we participated in the “Colombo Blind Walk”, the Sri Lankan leg of the World Blind Walk, initiated and coordinated by Project Vision, Bangalore, India on the 13th of October 2016.


The Midtown Family partnered together to organize this project with the noble objective of raising awareness about the issues faced by the visually impaired and encouraging eye donation as a means of sharing the gift of vision.


At the end of the Blind Walk, the participants joined together to create a beautiful human mosaic at the University grounds, symbolizing that together we can create awareness and together we can create a difference in the society. Subsequently, an entertainment segment took place where a combination of Sinhala, English, Tamil and Hindi songs were performed by the participants of ‘Friends in Action’ and individuals of the Sri Lanka Foundation for the Visually Handicapped. Read More

I to Eye Phase 1
We conducted yet another day of eye pledging under our signature Community Service project ‘I to Eye’, on the 14th of November 2016, at the Gangaramaya Temple. With the help of Sri Lanka Eye Donation Society, the necessary documentation for pledging eyes were made available for all the worshipers and we were extremely overwhelmed by the generosity of the many people who stepped up to donate their eyes, organs, tissue and the entire body!

Happy Hope Bag Phase 1
Happy Hope Bag is a community service initiative undertaken by our club to bring hope and happiness to selected underprivileged families, during various festive seasons. Widowed, disabled, unemployed or lacking of a stable income, life has been unfair to each of these people in different ways. 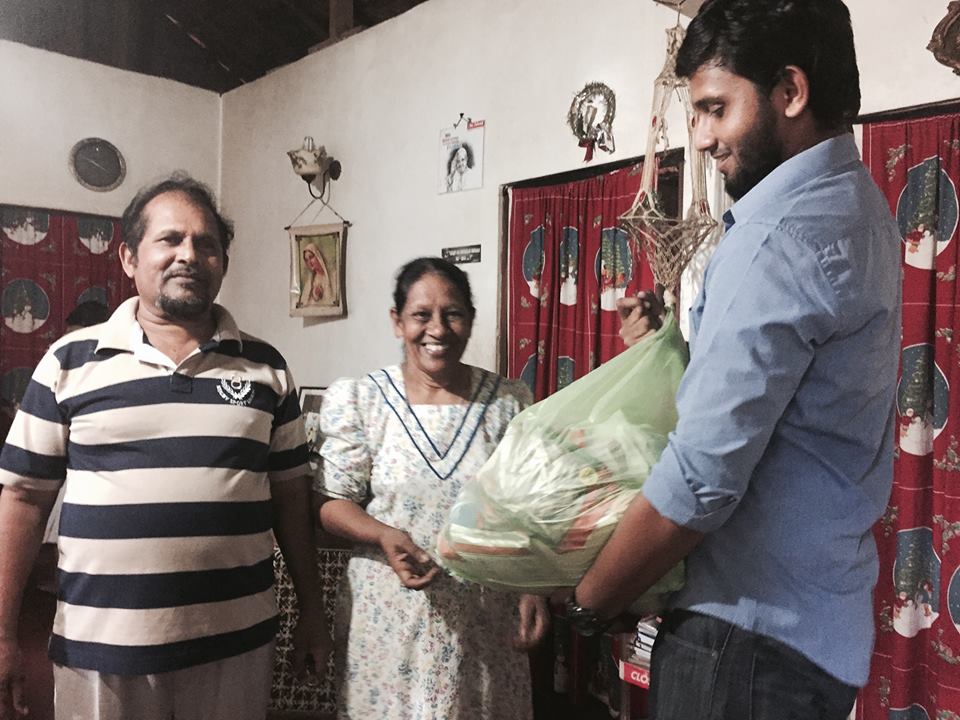 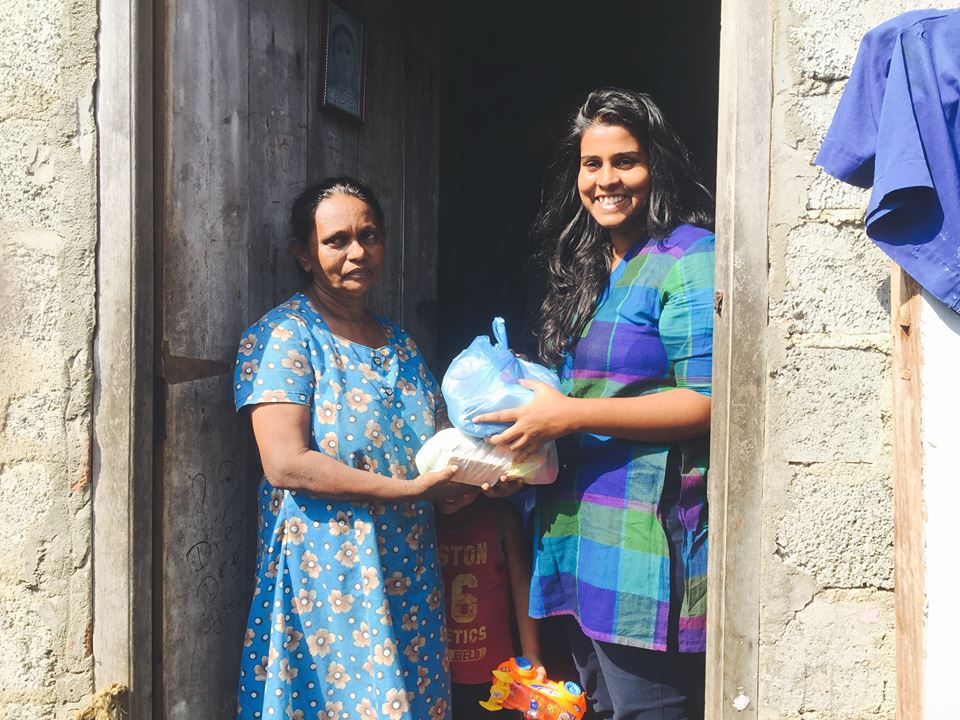 Orientation 2016
The orientation program for the term 2016/17 was held on the 29th of November 2016, at the New Arts Theater, University of Colombo. This time around, the orientation was conducted in a way it has never been done before in the history of the club.


First, was an introduction to the Rotaract movement, which was conducted by our Club Guide Director and District Member Development Director Rtr. PP Krishan Balaji and District Club Service Director Rtr. PP Punith Gunasekara. Next, was a competition where each team had to come up with a project proposal in line with a particular Sustainability Development Goal. This gave an opportunity to our new members to get a taste of what it is like to plan and present a project proposal, all the while bonding with each other. The last session comprised of a series of fun ice breakers and the program came to end with the distribution of awards to the respective winners of the competition and games.


The orientation was indeed a day filled with knowledge, fun and great memories to cherish and we welcome our new members to the RCUOCFMF family with open arms! Read More

Rotaraction 2016
‘Rotaraction 2016’, our signature Club Service project, was carried out in the months of November and December, in celebration of the Sports month. All the members were divided into 4 houses, which were named after the first four Rotarians; Rtn. Gustavus Loehr, Rtn. Silvester Schiele, Rtn. Hiram E. Shorey and Rtn. Paul P. Harris.


Indoor games such as carom, badminton and table tennis were held on several days during the month of November and were followed by “League dé FMF” on the 17th of December, which comprised of a number of sports such as cricket, basketball, badminton, athletics and many more. After two months of competition and fellowship, House Silvester was crowned as the Overall Champions of Rotaraction 2016, while House Gustavus was able to finish as the runners up.


This fun filled event provided a great opportunity for the club members to interact with each other, all the while showing their colors in many different sports. Kudos to all the winners and the Co-Chairpersons of the project, Rtr. Peshala Samaratunge and Rtr. Oshani Weerakkody for pulling it off successfully.

One Youth One Nation Peace Campaign-IYAP
One Youth One Nation Peace Campaign was a professional development workshop organized by our club in partnership with the International Youth Alliance for Peace (IYAP), on the 10th of October 2016 under the theme “One Youth One Nation”. The main objective of this project was to create awareness among the undergraduates of the University of Colombo, Faculty of Management and Finance, on the importance of peace, the relationship between the youth and peace and how the youth can contribute to building peace among the community.


The workshop was conducted by highly skilled and experienced facilitators, Miss. Naushalya Rajapaksha, one of the Official Youth Delegates of Sri Lanka to the 70th General Assembly and Mr. Ramzi Deen, the Outgoing National Director of Sri Lanka Unites.
This project was chaired by our very own Professional Development Directors Rtr. Haresh Wijayanayaka and Rtr. Amaya Karunaratne.


Glass Ice 2.0
Glass Ice 2.0, our ultimate career and personality development workshop as well our signature Professional Development project for the year, was held on the 2nd of December, 2016 at Trace Expert City, Maradana.


The evening was graced by the presence of five inspirational personalities, Shanuki De Alwis, Creative group head, TBWA; Irfan Ahmed, Founder of Innovation Quotient; Lonali Rodrigo, Founder of House of Lonali; Rohan Jayaweera, COO, Antyra Solutions and former Google country consultant for Sri Lanka and Major General Kamal Gunaratne, former commander of Wanni and the author of the best seller “Road to Nandikadal”, who shared their personal experiences which inspired and motivated the audience who were present at the occasion.


The project ended successfully surpassing everyone’s expectations and was able to empower and inspire individuals to be innovative and persistent entrepreneurs and leaders who would someday write their own story and create their own unique brand. Read More

Diwali Festival
As a part of the Rotaract Diwali Celebrations, Midtown Rotary family including our club got together to organize a Diwali Festival at the Vishnu kovil, Dehiwala on Diwali, 29th October from 11.00 pm onwards, with the objective of fostering peace among different communities.


During the festival, all the participants were enlightened on the story behind Diwali celebrations and how and why people celebrate this festival by our Immediate Past District Rotaract Representative Rtr. PP Sathiyeandra Tharmakulerajasingham and they end this beautiful day on a happy note by making a donation to the kovil in the form of dry rations which included rice, dhal, coconuts and other essentials to provide cooked meals for the devotees who visit the kovil every Sunday.

Thudugala Ella Clean-up
The Thudugala Ella clean-up, the first phase of our signature green life project “Green Dream”, took place on the 28th of October under the leadership of the project chairpersons Rtr. Charith Kumarasinghe and Rtr. Chamini Abeysekara.


Thudugala Ella is situated in a breath-taking location and one of the most popular waterfalls in Sri Lanka. Even though this natural stream pool is loved by many foreigners and locals, the surrounding area of the Thudugala Ella is continuously littered by the tourists, which prompted our club to initiate this project.


In addition to cleaning the surrounding area, we installed notices to build awareness and encourage visitors to keep the area clean and was able to end this wonderful project with an exciting fellowship session.

King Spin
King Spin, the ultimate bowling tournament of the year, was successfully held on the 29th of October 2016, at Excel World, Colombo. This exciting project was able to bring about a massive turnout of over 200 participants including Interactors, Rotaractors, Rotarians and the general public at large, and give everyone truly an incredible and an unforgettable experience of bowling.


As one of the first ever projects of this scale undertaken by our club under the avenue of Finance, Kings Spin was able to raise funds for our signature community service project “I to Eye”, which focuses on the prevention of eye diseases and the promotion of eye donation and promote bowling among the Sri Lankan youth community at the same time.


The competition took place in two categories; Rotary Family category and Public category. Even though the competition was fierce, the participants were able to relish the event to its fullest while enjoying the refreshments, DJ music, photo booth and much more.


This wonderful project was chaired by our very own Rtr. Udanee Silva and Rtr. Janith Sachintha. Read More 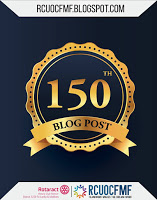 For our RCUOCFMFM blog, every month is an exciting month. Hence many milestones were surpassed during this quarter as well.


During October, we were able to surpass the 26000 view count, and also to publish our 150th blog post! In addition to that, we relaunched our famous blog column “Journey Through Rotaract”, featuring an interview with our very own Immediate Past President Rtr. Praveen Fernando, making it even more special. And During November and December, we surpassed the 30000 and 40000 view counts and was able to publish many more exciting blog articles for our readers.


As always, we would like to extend our appreciation to all our club members and to all our blog readers for their remarkable support and enthusiasm towards making our Blog the best there is in the entire Rotaract District 3220.