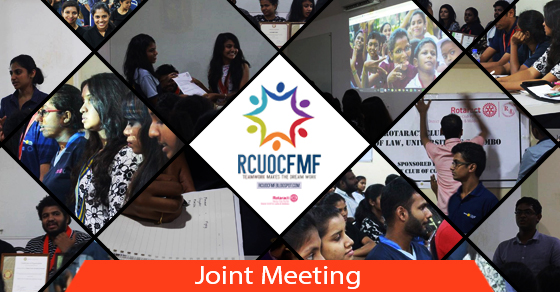 The meeting was hosted by the Rotaract Club of Colombo West and the head table was occupied by the Presidents and the Secretaries of the respective clubs. The meeting was called to order by the President of the Rotaract Club of Colombo West, Rtr. Sasmini Bandara and was followed by the Flag Salutation, Invocation, Four-way test and the Rotaract Song. Subsequently, the Secretaries of each club presented the minutes of the last club meetings.
Afterwards, each club enlightened the gathering about details of their ongoing and upcoming projects. President Rtr. Sasmini from Rotaract Club of Colombo West introduced the project “Fellowship 11” and officially launched their club blog and handed over the appointment letters to respective members of the club. Furthermore, she announced about their upcoming and ongoing projects, “West skate day” and the Cluster project to the audience as well.
Our club shared updates of the projects “R-Evolution” and  “V-Connect”, which is the signature International Service project which will be happening in the month of March.
President Rtr. Vikum from the Rotaract Club of University of Colombo Faculty of Law informed the members about their plans for the induction of the 1st year undergraduates and he requested the fellow Rotaractors to donate books for their project “Pages with Love-Annual Book Donation”. Also, details about projects “Cluster Phase II” and “Soundscope” were shared with the audience.
President Rtr. Yasas from the Rotaract Club of University of Colombo Faculty of Science informed the gathering about the projects “Future Challenge 2017”, “Akhankhara Phase I and Phase II” and “Cluster Project” and next, our President Rtr. Christeena Perera shared details about the District events that were coming up.
Next was the ice breaker session conducted by Rtr. Akhila and Rtr. Malith of our club, which got everyone excited and created the perfect opportunity to get to know each other.
At the end, everyone was looking forward to the next joint meeting and suggested that they should meet more often as it strengthens the relationship among the Rotaractors, while creating beautiful memories.
The meeting was successfully concluded with the National Anthem and everyone gathered to take a group photograph to mark the end of this joyful meeting.
Written By-
Clicks By- Official FB Page of RAC UOC Faculty of Law