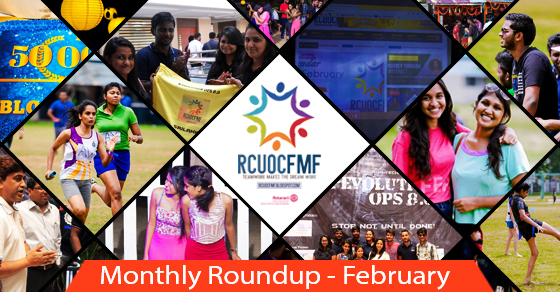 Club Party 2017
Our club party was held for the 6th consecutive year on the 10th of February, at the Beach House Bistro, Dehiwala with the participation of over 60 current and past RCUOCFMFers. The night proved to be a memorable one as it was filled with good company, music and food, giving the members an opportunity to enjoy themselves to their heart’s consent.


The highlights of the night were the blog re-launch and Secret Valentine, which is also a tradition of our club, where all those who were present received a gift. Furthermore, games such as musical chairs and paper dancing, in which everyone participated and enjoyed, added color to the night.


Kudos to the organizing committee headed by the Co-chairpersons Rtr. Akshana Perera and Rtr. Yasitha De Silva, for pulling off a great party! Read More


RCL was organized by the Rotaract District along with a number of Rotaract Clubs who were given the responsibility of organizing different games, where our club hosted athletics and cricket.


The 3 day sporting event provided young Rotaractors an opportunity to portray their skills in the sporting arena and all the clubs welcomed the challenge of being the ‘Champion’ with open arms. Amidst the scorching sun and the heavy rain alike, all participants and their cheering squads ended up having a great time!

Car Wash 2017
The car wash, which is organized by our club each year, is one of the most anticipated events in our Rotaract calendar, as it is the very first project that is solely organized by the second year club members. This time around, it was named ‘Wash for a cause’ and was held on the 26th of February, at the BRC Grounds.


It turned out to be an immense success as we were able to collect more than what we targeted. All the proceeds will be used to fund our signature Community Service project ‘Future for us’, which is aimed at improving the soft skills of the less privileged students.


We would like to extend our heartiest congratulations to the Co-chairpersons Rtr. Poornima Gamage and Rtr. Kasun Wijerathne and the all the second year RCUOCFMFers for a job well done!

R-evolution
R-Evolution is an International non-technical quiz competition conducted by the Rotaract Club of D.Y. Patil Vidya Pratishthan (RCDYPVP), Pune, India. We conducted round 1 of the competition in Sri Lanka with the participation of Rotaractors and non-rotaractors. It was a pen and paper test and it was conducted successfully with the participation of more than 20 teams which consisted of teams from a number of Clubs, at the University of Colombo, Faculty of Management and Finance premises on 6th of February, 2017.


The top 2 teams which consisted of Rtr. Meshini Kudahetti, Rtr. Sandunika Wijebandara, Rtr. Saroos Jazeem, and Rtr. Amry Asif accepted the challenge and flew to India to take part in the International round of R-Evolution. The visit was from the 17th to 20th February and the competition was held on 19th February at the Dr. D. Y Patil Institute of Technology, Pimpri, Pune.


For the International round of the competition, the national winners of India competed with the teams from other countries. It was quite exciting; the buzzer was used and questions were from IQ and General Knowledge covering different areas. A  team from Bangalore won the 1st place while the first runners up and the second runners up was secured by a team from Hydrabad and our own RCUOCFMF team!

Blog Re-launch
February was without a doubt a very special month in our RCUOCFMF blog journey. As a blog that continuously strives to give the next level of blog experience to our readers, we re-launched our blog with a completely new look that will give a seamless and sophisticated blog experience to our readers. This special event took place during our club party on the 10th of February and during the event, we didn’t forget to celebrate our achievement of surpassing 50000 views as well. We were delighted to celebrate this special occasion with the participation of past and present club members.


As we always say, we wouldn’t be able to achieve all of these great milestones if not for the support and motivation extended by our club members and our blog readers and we promise to repay this support by continually making our Blog the best there is in the entire Rotaract District 3220. So, this just a beginning of long list of surprises we have planned for you. So, stay tuned and look forward to it!

Rotasia 2017
Rotasia, the International conference of Rotaractors and Rotaract Clubs in South Asia was held from the 22nd of February to the 2nd of March in India. This special and exciting event gives the best opportunity to Rotaractors in the region to exchange information, enhance fellowship and build long lasting networks that are an essential part of our Rotaract journey. Representing our club, President Rtr. Christeena Hiruni Perera and Rtr. Akhila Wijetunga attended the conference. Stay tuned to our blog article on Rotasia to know all the things happened during the event. 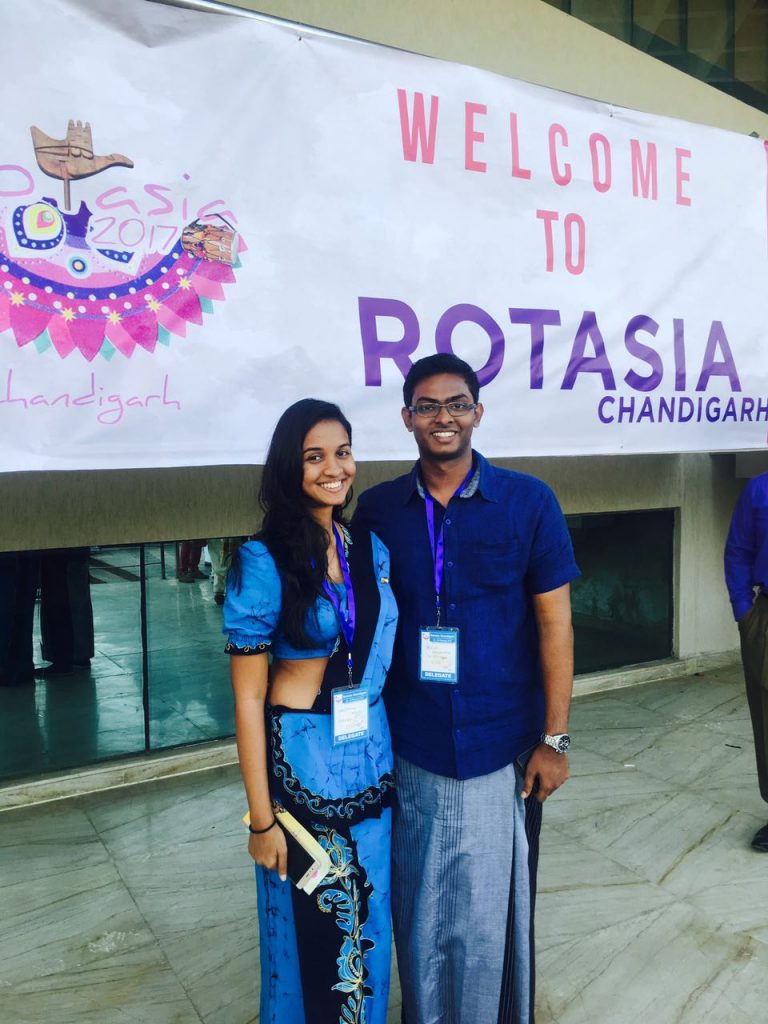 
Members of Rotaract Clubs from different parts of India and few International Rotaract Clubs including ours were invited to join with ICYE. Accordingly, 3 members from our club; Rtr. Devmini Weerasuriya, Rtr. Ayesha Samarathunga and Rtr. Mandree Dissanayake accompanied the 4 winners of R-Evolution Ops 8.0 to India. 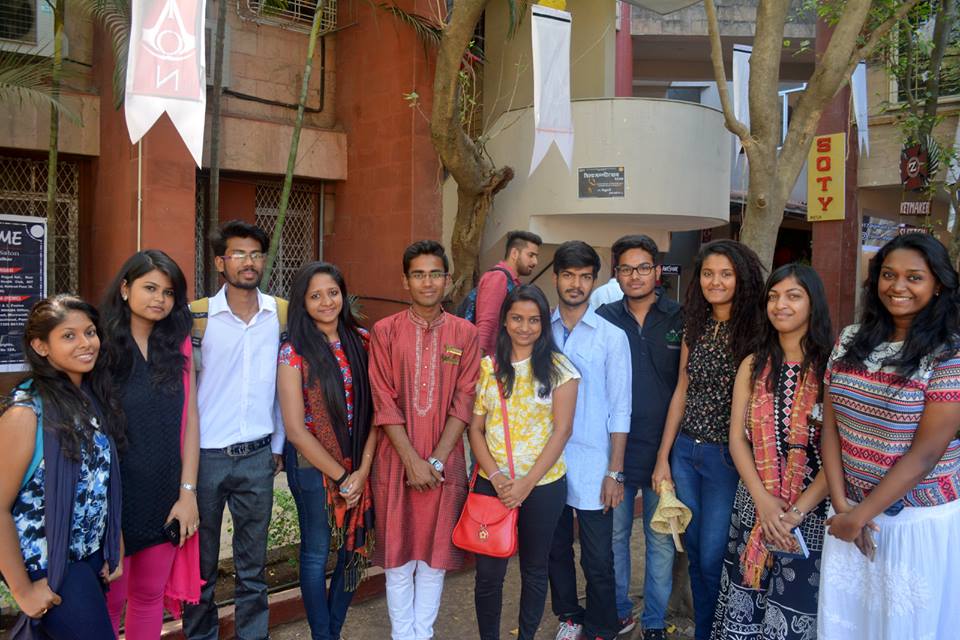 All were hosted by the members of RC DYPVP in terms of food and accommodation and visits to famous places in Pune such as Agakhan Place and Shaniwar Wada, participating in events organized at their Institute such as Sankrithi and shopping tours were among the agenda for the 3 days.


We got the opportunity to interact and create fellowships with Rotaractors from 7 different parts of India and Rotarians from their Sponsoring Club Rotary Club of Akuradi RID 3131 as well. Further as a part of the project, Friendship Agreements were signed with RCUOCFMF by RC DYPVP and RC Hydrabad Himayathnagar. 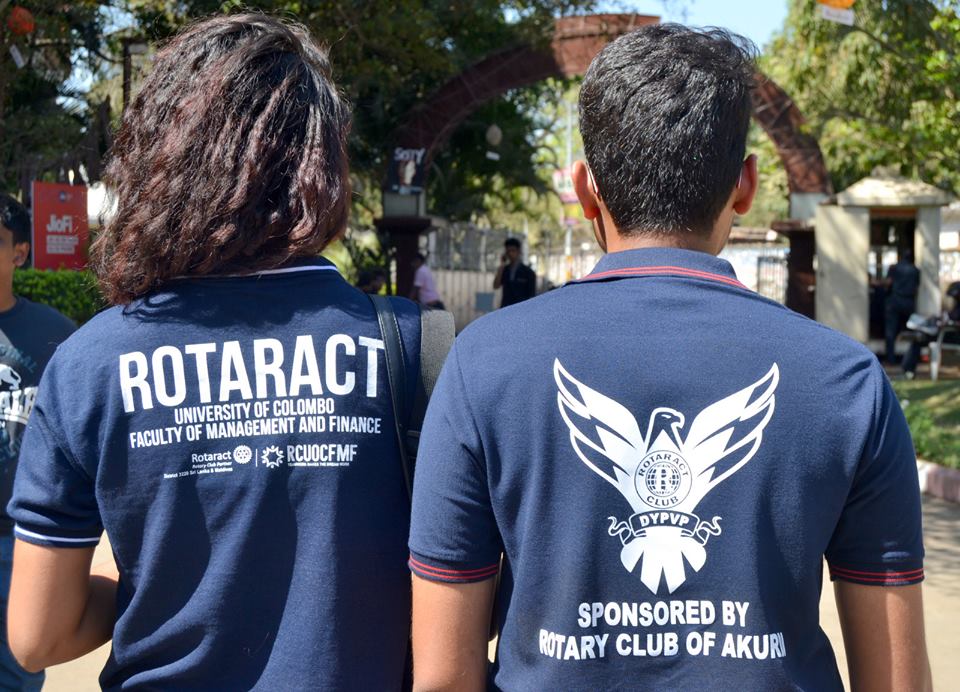 Hotdog Showdown
This exciting project, organized by the Rotaract Club of IIT, was held on the 12th February at the Race Course. With food and beverage stalls, XBOX and PS4 Gaming stalls, DJ Music, live performances, Open Mic, Karaoke, celebrity competitions and an after party, this event was able to give an unforgettable experience to all the hot dog lovers out there. On behalf of our club, Rtr. Akhila Wijetunga attended the event.