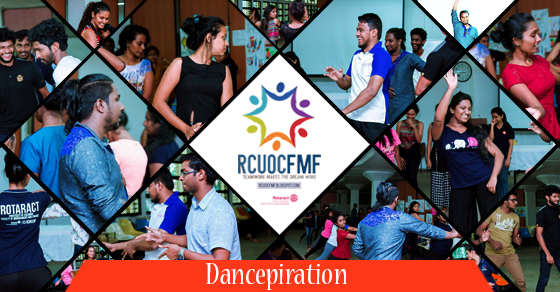 
This is a question I’ve constantly asked myself. Well personally, I think I have a bit of rhythm in me and I can sway my body in a way that wouldn’t hurt another person’s eyes or else I compare my dancing skills and think to myself at least I’m not horrible, but the true fact is that;
कोई भी नृत्य कर सकता है (koee bhee nrty kar sakata hai) meaning, “Anybody can dance”


Dancepiration, a Bollywood dancing workshop, held on the 25th of March, at the Law Faculty Ceylon Room, University of Colombo truly made me believe in the above statement.


The workshop was conducted by Mr. Hiran Wijesekara a truly dynamic individual who is a versatile personality in the Dancing Industry of Sri Lanka. During his career, he has done television programs, cultural events, workshops, teledramas and a number of commercials up to date.


Beginning his career as a fashion designer, Mr. Hiran has come a long way getting into the limelight as now, he has become a national director in a number of world recognized international fashion and dancing events.


We felt very humbled and honoured to be instructed by a true Guru.


The event commenced with the usual registrations and was followed by a small introduction about Indian dancing and the different forms of Indian dance and how Bollywood dance, in particular, has been influenced by the “Kathak” dancing style.


We did a very simple and small exercise to get warmed up and this was followed by many interactive activities to show us the importance of emotions and eye contact; followed by a few dance moves which were inspired by our everyday routine activities like opening a window.


Then started the fun part where we were taught the routine for the movie Goliyon Ki Rasleela Ram-Leela’s famous and catchy song ‘Nagada Sang Dhol’ which made myself, in particular, realize the numerous times I’ve watched people dance and thought to myself “ahh that’s simple” was absolutely wrong.

We developed a whole different level of respect for Deepika Padukone for mastering the routine which was so complex and tedious.


The event concluded with the dance routine being recorded and Hiran sir being thanked and presented with a token of appreciation.


This event made us realize that everyone can dance, but you need the right person and music to make that talent break free; it is always about confidence and being comfortable in your own skin.


It was a pleasure to be a Chairperson of this event together with Rtr. Gayani Weerasinghe and a tremendous thank you to the Dancepiration organizing committee for the support given to make this event a success.