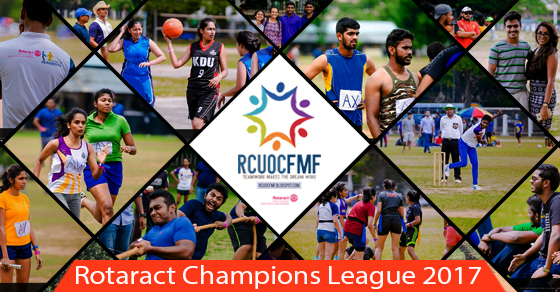 Posted at 05:09h in District Events, Others, Uncategorized by rcuocfmfadmin 0 Comments

The Rotaract Champions League, also known as RCL, is a gala event organized by the Rotaract District 3220 Sri Lanka and Maldives along with other Rotaract clubs of the District annually. Organized for the third consecutive year, its objective was to build up the enthusiasm among the Rotaractors to participate in an island wide sport meet and to create a fun filled sporty environment, where Rotaractors were given the chance to showcase their physical skills and strengths all throughout the event and bring out their inner sportsmanship.


It was a 3 day sports extravaganza which was held on the 5th, 18th and 19th of February 2017, with the participation of many enthusiastic all island Rotaractors. The three days were divided into 3 main sports events. While day 1 was for indoor games which included table tennis, badminton, carom, chess and futsal; day 2 was for outdoor games which included basketball, tag rugby and cricket; which left the final day for the athletic events and the latter part of the day was spent in fun activities to lift the spirit up. Over 300 Rotaractors were registered, which made it a very competitive, yet an exciting sports event.

Different sports were hosted by different Rotaract clubs and it was a great platform to build fellowship among the Rotaractors.

Our club had the responsibility of hosting Cricket & Athletics, which were held on the second & the third day at the University of Colombo Grounds. As the host, our club had to organize a softball cricket tournament with 15 girls teams and 30 boys teams and an athletic meet which included track events such as 100m, 200m, 400m, 1500m and relays and a field event of shot put.


We were unable to commence the much awaited award ceremony due to unfortunate weather conditions, but as Vinace Lombard said “The spirit, the will to win and the will to excel, are the things that endure. These qualities are so much important than the events that occur”.

As a result of the massive collaboration, cooperation and the hard work of the organizing committee, the event was a huge success where the objectives of organizing the project were achieved at its best.


It was a great pleasure for me and Rtr. Chamara to chair this project on behalf of our club, which resulted in gaining a wide exposure and collecting a variety of experiences. Nevertheless, the support given by the team members cannot be undermined as they were a great helping hand in completing the given task.


Last but not least, it must be appreciated that our club secured many places in this event making the club name stand out among others. In summary, our club was able to obtain 1st place in women’s as well as men’s cricket and also in women’s rugby. Concurrently we secured the 2nd place in carom and 3rd place in men’s basketball. Even more,our athletes emerged victorious in track and field events by keeping us ahead of the event.


All participants skillfully managed to showcase their physical talents while creating healthy relationships with the fellow Rotaractors they met from the other clubs and this was one of the greatest outcomes reaped from the well organized project. Experience and enjoyment gained by the participants through this massive event will undoubtedly carry wonderful memories that will linger in the years to come.