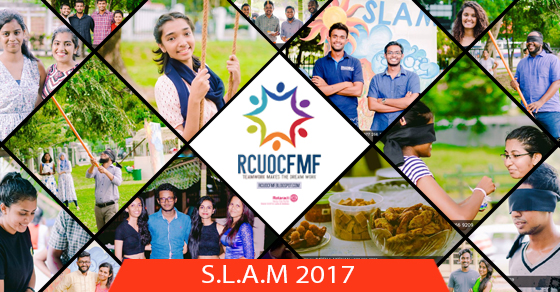 
Since it was held at the beginning of April when everyone is excited about the New Year, this year the scavenger hunt was followed by an awurudu uthsawaya and a paduru party. It was held on the 2nd of April, from 2.00 pm onwards at the University premises with the participation of around sixty members from the four hosting clubs. Since the theme of this year’s event was awurudu, members participated in awurudu attire to add more color to the event.


The day’s proceedings started off with the registration of the participants and they were divided into the groups of four comprising of Rotaractors from each faculty. They had to figure out six places around the university premises with the given clues and complete a challenge at each station. What made the scavenger hunt different from last year was that they had to engage in awurudu related games in almost all the stations. At the same time, the teams were given a list of items to be collected while doing the games and points were given according to the number of items collected. To make things even more interesting, they were given an egg to be kept with themselves throughout the scavenger hunt.

The starting point of the scavenger hunt was the University grounds and the teams were given clues in riddle form which led them to six different stations. Figuring out the clues was a very tough challenge as the clues gave away little; however, through teamwork the participants were able to figure out all the stations. The teams got the clue for their next station after completing the challenge given by the previous station.


Once the teams arrived at the stations, they had to take part in the awurudu related games such as, kewum game, dizzy cricket, kiri keweema, piti scrabble, balloon game, lime balancing and an awurudu quiz. After completing all the tasks of all six stations, they were asked to upload a video of all the members of the team singing a jana kavi on Facebook. Although it was quite a difficult task to run around the University completing many challenges, all the teams were able to complete the scavenger hunt and the treasure hunt within the given time of two and half hours.


The competition among the teams was very intense and team ‘D’ was the first to complete all the challenges and collect all the treasures that were given in the list and also they were able to protect the egg given to them till the end. The video was also uploaded before time ran out.  So by comparing scores gained by other teams, team ‘D’ was awarded as winners of the scavenger hunt 2017 and was given an amazing prize.


After the completion of the scavenger hunt, everyone gathered near Gami Gedara which was built in the University grounds. The awurudu table inside the Gami Gedara was nicely arranged with Awurudu kewili and it was opened by the chief guests DRR Rtr. PP Mohamad Husni , DRRE Rtr. PP Anuradha Senanayaka and few other district officials. The ones who filled their stomachs up could then engage in certain awurudu games which were organized.

The event concluded with a joyful paduru party and it was indeed very relaxing to everyone, since they were exhausted after the scavenger hunt.


This year’s SLAM provided a great opportunity to revive the bond we have with the Rotaract Clubs of other faculties of the University and was undoubtedly a great experience for all the participants as it was unlike any other event in the Rotaract Calendar.