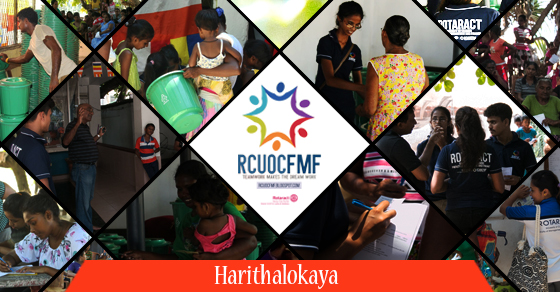 21 May “Harithalokaya” – Shining a new light towards a greener planet.

Sri Lanka had always been a busy tourist attraction in the South Asian region, mostly attributed to the small island’s culture, heritage, wild life and most importantly the breath taking coastal belt surrounding the island. Despite being one of the greatest tourist attractions and providing the livelihood for many, the coastal belt of Sri Lanka had faced its fair share of disruption. While many organizations and groups including our own club had taken continuous efforts to restore the beauty of the coastal belt, our club had always felt the need for initiating a mechanism which would prevent the further disruption of the area.


As a response to this thriving issue, our club initiated the project “Harithalokaya” as the final phase of the club’s signature green life project; “Green Dream”. The tripartite project focused on developing a sustainable plan for proper waste management within the coastal belt, thus addressing one of UNEPs emerging issues of environmental concerns; Micro plastics.


“Stop looking for solutions to problems and start looking for the right path.”
– Andy Stanley –

It is always important to identify the root cause of a problem to take the right path towards a sustainable solution. Accordingly, the first phase of the project was to conduct a survey within an area of 2.5 km along the Dehiwala-Mount Lavinia coastal belt, covering around 300 families and 30 corporates. The objective of the survey was to find answers for three critical questions.

Due to the above issues many residents of the area end up throwing garbage into the sea, burying garbage in the beach or burning garbage.

The above findings gave rise to the second phase of the project, which was to build awareness among the residents on proper waste management and garbage disposal and to provide solutions to the aforesaid issues. Accordingly, an awareness program was held on the 25th of March 2017, at which the residents were registered to provide garbage bins and was informed of the new garbage collection mechanism formulated with the help of the Dehiwala-Mount Lavinia Municipal Council. The residents were briefed on how to separate and dispose the garbage and what they can do to mitigate the risks associated with improper garbage disposal and waste management.

A huge thank you goes out to the Interact Clubs of Nalanda College and St. Peters’ College for joining us to conduct the survey and the Dehiwala- Mount Lavinia Municipal Council who supported us throughout this project and continues to do so. Finally, we would like to congratulate the Chairpersons of the project Rtr. Uvini Liyanage and Rtr. Dinithi Cooray on the successful completion of the project.