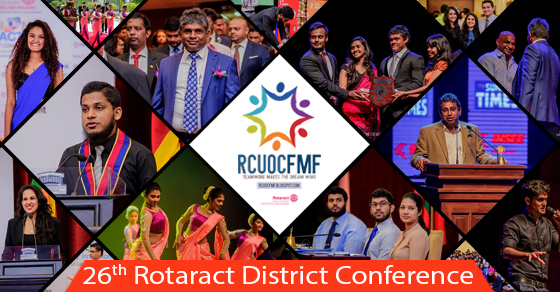 Posted at 08:02h in District Events, Others, Uncategorized by rcuocfmfadmin 0 Comments


The Rotaract District Conference, which is one of the most significant events in the Rotaract Diary, was held under two phases on the 22ndof April, 2017 at Nelum Pokuna and on 23rd of April, 2017 at BMICH, with the participation of more than 500 passionate Rotaractors. This is the first time more than 500 participants joined a Rotaract Conference and it made this year’s conference even more special. This was a good opportunity for the participants to get to know fellow Rotaractors and widen their network. Moreover, the stimulating speeches added more strength to the participants’ lives.


This enormous event was organised by the Rotaract Clubs of National School of Business Management, Excellence College, Kothalawala Defence University and Informatics Institute of Technology. They have organised the event faultlessly and was appreciated by all the participants.

The first session kicked off with the registration of participants. Afterwards, the participants gathered inside the hall and awaited the arrival of the distinguished invitees, who were accompanied by the Kandyan drums and dancers. Sri Lankans have a tradition of lighting an oil lamp at every important occasion and giving way to that tradition, the proceedings started with the lighting of the traditional oil lamp by dignitaries, followed by Rotaract pledge, Invocation and the Rotaract Song.

DRR Rtr. PP. Mohammed Husni called the House to Order. The first session of the day started off with a heartfelt welcome speech by Co – Chair, Immediate Past President Rtr. Abdul Wahid Sattar, which gave the audience an insight of the proceedings of the day. The event was graced by the Guest of Honour, Mr. Mahinda Deshapriya,Chairman of the Elections Commission.


The theme of the Conference Vision to Action, ‘’ Connect, Network, Share and Learn the true Passion of Rotaract’’ was given more value by the participation of the Rotaractors from India.
Afterwards, the Chief Guest of the occasion, District Governor Rtn. Senaka Amarasinghe addressed the audience where he commented on a few highlights on the Rotaract Year and spoke of upcoming events.


Next, was a striking session. DRR Rtr. PP. Mohammed Husni introduced a new Award, namely, ‘’The Outstanding Committee Leaders’ Award’’ which was given to Mr. Mahindra Deshapriya, and the District Governor Rtn. Senaka Amarasinghe for the first time ever.


Then, DRR Rtr. PP Mohammed Husni explained, ethical sponsorships and ethical partnerships are of vital importance for the Strategic Vision movement of Rotaract and he did not forget to show his gratitude to his District Committee.

Up next, was another exciting moment, which was the launch of the ‘’ProBono’’ Network for law professionals. In addition, it was mainly aimed to retain knowledgeable Rotaractors in the movement.


Next on the agenda was the highlight of the day, the fruitful speech made by the key speaker Dr. Harsha De Silva and he stressed over thinking outside the box. He conveyed a moral message to the young audience using his personal experiences, which must have surely motivated the crowd.


With this, the first session of the first day was adjourned for lunch and fellowship.


The famous artiste, Randir, inaugurated the second session with an intriguing item. He spoke of having dreams in life and dedication towards achieving them, which was followed by the Award Ceremony of Rotaract Champions League. Appreciation is something that we never forget in Rotaract events; hence the participants of RCL were much appreciated with gratitude at the Awards Ceremony.

With this, the first day of the Conference ended.


The second day started with the registration of participants along with a small treat for breakfast, which provided the participants an opportunity to bond with other Rotaractors.


Subsequently, participants gathered inside the hall with much enthusiasm. The session proceeded after the curtain raiser, which was a short video of Rotary Foundation Centennial.


Next on the agenda was a session on ‘winning the world by following our Passion’ by Rtn. Aruna Mohottala, which was followed by another session by Rtn. Micheal Munasinghe on ‘’Entrepreneurship’’.


Next, was a distinctive hearing, which was delivered by Mr. Hasitha Wijesundara on the Role of Innovation and Entrepreneurship in creating sustainable competitiveness in the National Economy. After these interesting sessions on a few educational topics, the gathering was adjourned for lunch and fellowship.

The second session commenced with the arrival of Dignitaries at the respective breakout sessions.


This year’s breakout sessions took a different approach. At the registration, they divided the participants to three groups; personal branding, theatre forum and mental capacity program. Personal branding was about presenting yourself, standing out from the crowd. Moreover, the speaker strained the difference between boasting and self presentation.


Next clutch was the theater forum, which had many interactive sessions where the conductors got partakers to act on stage in order to teach how to solve current issues in the society using theater forum. This session was conducted by Mr. Ramzi Zain and Mr.Thariq Mohideen.


The breakout session regarding mental capacity was mainly focused on motivating the participants on how to maximize their potential. The session was conducted by Mr.Ranjan De Silva and it was themed as ‘’Gearing up for Excellence’’. During the session, the participants were taught about Neuro Linguistic Programme and how it could be used as a tool for maximizing mental capacity and add value to life. It stressed on thinking before taking actions and remaining positive in mind could always yield bigger for all who practice it.


Afterwards, DRR Rtr. PP. Mohammed Husni delivered a speech enlightening the audience. The final item for the day was the expression of Thanks given by the District Secretary Rtr. Tilani Subasinghe and the conference was adjourned after paying tribute to our country. The after party on the same evening was indeed a great ending to the 26th Rotaract District Conference.


As such, undoubtedly, the 22nd and 23rd of April, 2017 proved to be two memorable days for everyone who participated for the conference and the after party.