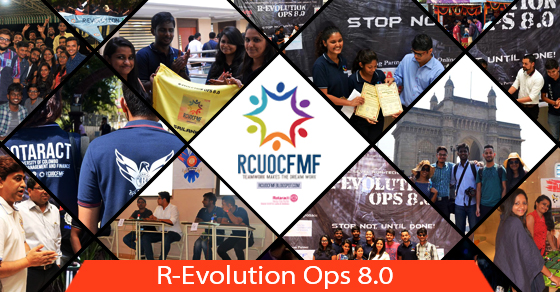 R- Evolution Ops 8.0 was an international non-technical quiz competition organized by the Rotaract club of DYPVP, Pune , India. Over 3600 participants from 1800 teams participated; including teams from Pune, Indian teams’ outside Pune and international teams from Sri Lanka, Nepal, Tunisia and Indonesia.

Our club organized the first round in Sri Lanka, on the 6th of February, 2017, as we got the invitation from Rtr. Mayank Vats, International Service Director, RCDYPVP.  Over 20 teams including rotaractors as well as non-rotaractors participated and the top five scoring teams were recognized as the winners, out of which the top two teams which consisted of Rtr. Meshini Kudahetti, Rtr. Sandunika Wijebandara, Rtr. Amry Asif and Rtr. Saroos Jazeem took part in the international rounds in India.

The R-Evolution first round was conducted in 13 cities across India and on the 19th February the second, third and the final rounds were conducted. RCDYPVP hosted all the teams from India and other countries during the competition.  Second round was a rapid fire and group discussion round. In rapid fire, the questions were based on general knowledge; participants got a maximum of 1-minute to answer. In-group discussion the participants were given a topic to discuss, those who competed well were qualified for the next round. Qualified competitors for the third round had to go through a buzzer round where they were given questions based on India. The winners were recognized as national winners of R-Evolution Ops 8.0 and were qualified for international rounds.
International rounds were similar to the buzzer rounds where competitors got general knowledge questions from different sectors from countries all over the world. President of RC of Akurudi 2016/17 Rtn. Vijay Tarak, Secretary of RC of Akurudi 2016/17 Rtn. Ganesh Jamgaonkar, Past President RC Akurdi Rtn. Jeetendra Sharma , President RC Akurdi 2017-18 Rtn. Ujjwala Joshi, RCC RC Akurdi  Rtn. Sameer 2017-18 and Faculty Advisor Prof. Dheeraj Agarwal participated as the chief guests for the international rounds. Team A from Bangalore won the first place, while Hydrabad team and our very own team became first runners up and second runners up respectively. Winners were awarded with trophies, certificates and cash prizes. The Rotary club of Akurdi organized a success party for all the winners and for RCDYPVP Rotaractors.
All the members who participated from our club undoubtedly had the best time of their life. Our team was invited as the chief guests for the cultural talent show “Sanskrit”, Inter faculty Quiz competition “Zion” and Art exhibition organized by the students of DYPVP institute, which was a great experience for all the participants from our club.
Throughout the journey, the hospitality was at its best. Each and everyone from the RC DYPVP club was so supportive, indeed was like family. Varun Jain member of DYPVP guided us from Mumbai Airport on the very first day we landed to India to the very last moment we were in India and took care of everything. With his help we visited Gateway of India, Marine Drive, street shops and amazing restaurants. President of Rotaract Club of DYPVP Rtr. Sai Swaroop SK, Secretary Rtr. Shreya Singh and International Service Director Rtr. Mayank Vats from RCDYPVP did a major role and was very grateful for all the participants.