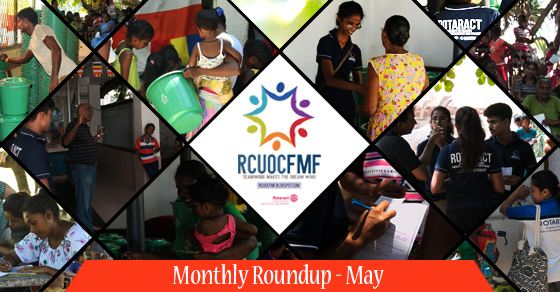 Posted at 05:06h in Round Ups, Uncategorized by rcuocfmfadmin 0 Comments
Green Life

Harithalokaya
The final phase of the project Harithalokaya was successfully completed on the 13th of May, 2017 with the help of the Dehiwala- Mount Lavinia Municipal Council. On this day, a total of 335 bins were handed out to the residents of this coastal belt. The bins were given as a perk for the residents to encourage them to separate garbage and to properly dispose of them.

Harithalokaya was the final phase of the club’s signature green life project; “Green Dream” and was organized with the main objective of developing a sustainable plan for proper waste management within the coastal belt, thus addressing one of the UNEPs emerging issues of environmental concerns; Microplastics.


A special acknowledgement should be given to the project chairs of this noteworthy project; Rtr. Uvini Liyanage and Rtr. Dinithi Cooray for successfully completing this project amidst many challenges. Read more

Bake Sale
This is a project that was organized for all the food lovers out there. With the objectives of raising funds for the future Community Service projects of the club as well as to provide the customers with delicious and delectable food, this project was held on 3rd and 16th of May in the Management Faculty premises.

Not only did this project provide the customers with all enticing food such as cupcakes, marble cake, biscuit pudding, cookies, pancake, éclairs’, ice coffee, mango juice, orange juice and watermelon juice, it also included a Mehendi stall.


At the end of this project the tummies of the customers as well as their hearts were filled with happiness.


This project was chaired by Rtr. Amandi Umagiliya and Rtr. Hasangi Tennakoon.


External Events
Here are some of the external club events our members took part in during the month of May.

PETS & SETS for RY 2017-18
PETS & SETS is one of the one of the most important annual and National level events in our Rotaract Calendar. This time it was held on 20th and 21st of May. This two days training program for President and Secretary Elects for the Rotaract Year 2017-18 was filled with interactive and very interesting breakout sessions to help out the future leaders of Rotaract to make the best of their coming year.


At the end of this wonderful opportunity, each individual was able to acquire new and immeasurable knowledge and experiences as well as to built long lasting networks that will make their Rotaract journey ahead even better.

BATHIYA & SANTHUSH – Up-close and Personal Concert
This was unforgettable an project organized by the Rotaract Club of General Sir John Kotelawala Defence University (KDU) in collaboration with the Rotary Club of Colombo on the 3rd of May, at Bandaranaike Memorial International Conference Hall.


Not only the project was able to give an unforgettable and long-lasting musical experience to the audience, but it was also organized with the very noble objective of aiding of the Thalassemia patients of Mahara Thalassemia Centre making this an even more special project.


At the end of the night, the audience had nothing but praises, making this a very successful project indeed.

Friends In Action 2017
FIA 2017 was a very exciting a musical battle organized by the Rotaract Club of Achievers Lanka Business School on the 27th of May, at the Royal MAS Arena. While giving a thrilling musical experience to the audience, this project was capable of providing a platform for future artists in Sri Lanka to showcase their talents and shine in the spotlight.


After a very competitive round of auditions and a semi final, top 14 contestants that were selected, battled each other with their musical talent making the evening very thrilling and musical action packed. To make it even more special some of the well-known artists in Sri Lanka, including Julius Mitchel of Beat Boxing fame and ‘Freeze’ performed for the audience.