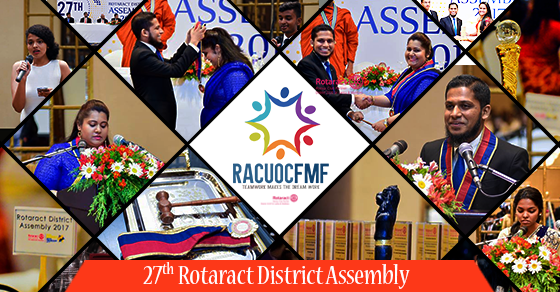 Posted at 07:08h in District Events, Others, Uncategorized by rcuocfmfadmin 0 Comments


The gathering was then warmly welcomed by the Chairperson Rtr. PP Punith Gunasekara recognizing the presence of the distinguished guests at the event. Next in line, was the Secretary’s report for the year 2016/17 which was presented by the outgoing District Secretary Rtr. PP Tilani Subasinghe.


Afterwards, the gathering was heartily addressed by the outgoing DRR Rtr. PP Mohamed Husni. In his speech, he emphasized on the initiatives he took in making “Vision to Action” his theme while focusing on Sustainable Development Goals throughout the year. He thanked all those who supported him throughout the year and extended his special thanks to his committee for the unparalleled support given to him. The gathering was then addressed by the outgoing District Youth Service Chair, Rtn. Selvaraja Maherakanth. He recognized the outstanding performance shown by the District in terms of all the projects completed and congratulated the outgoing DRR for a fabulous year thus completed.


Tokens of appreciation were then given away by the outgoing DRR to the dignitaries, the District Committee 2016/17 and the outstanding individuals who have lent their unparalleled support to all the District events and projects. Furthermore, special awards of recognition were awarded to the Rotaract Clubs who have hosted District events and completed outstanding projects that drew the international focus to District 3220.


The District committee went on to give Special awards of recognition to the outgoing DRR Rtr. PP Mohamed Husni and outgoing District Secretary Rtr. PP Tilani Subasinghe for their dedication and hard work that lead the Rotaract Year 2016/17 to end in style.


The gathering was then addressed by the Guest of Honour, outgoing District Rotaract Committee Chair Rtn. PHF Sanjeewa Fernando who recognized the dedication of the committee lead by the outgoing DRR and wished the incoming DRR and the committee for yet another successful year.


Next in-line, was an entertainment item performed by the newly initiated Music Unit of the Rotaract District 3220, followed by the address of the Chief Guest for the morning session, District Governor for the year 2016/17, Rtn. Senaka Amarasinghe. He highlighted the international awards won by the District and appreciated the progress the District had shown under the leadership of the outgoing DRR.


The gathering was then split into groups to participate in the workshops organized to enlighten the newly elected Board members of the Rotaract clubs on their duties and responsibilities. The end of the first session was marked with the breakout of the gathering for lunch.

The arrival of the dignitaries marked the commencement of the second session, which was then followed by the lighting of the oil lamp. The Chairperson set the ball rolling by calling the Assembly to order and starting off yet another chapter in the Rotaract history.


The most crucial part of the day started off with a preface on the story of a great leader who is also a woman with an aspiring vision. The collaring of the incoming DRR Rtr. PP Anuradha Senanayake, was followed by her address to the gathering as the 27th DRR. She made it an opportunity to talk about her journey through Rotaract and how Rotaract made an impact on her life in many ways, such as giving her room to network with Rotaractors who are now her lifelong friends. She then elaborated on the theme for the next 365 days which is “Engage Rotaract, Redefine Friendship”. The plain words which have a vast concept deeply buried within, thus provides an interesting twist in the tale. Each letter in the word ‘Friendship’ has a stance on different areas.


The District Committee for the Rotaract Year 2017/18, is as follows;


Being a Rotaractor is not just a profession but requires a lot of dedication and perseverance without a wage, and the least we could do is to appreciate the heroes behind these great projects. Accordingly, next in line was the recognition of the diligent Rotaractors and their respective clubs.

Then, the Assembly was terminated after pronouncing of the vote of thanks by the District Secretery, Rtr. Shalanka Weerasinghe.


Some say, Rotaractors are famous for charity service but I must say that they know how to celebrate with a bit of dancing every now and then. The Bollywood themed after party was a great platform to mingle with fellow Rotaractors and provided an opportunity to end a busy day with a bit of fun.