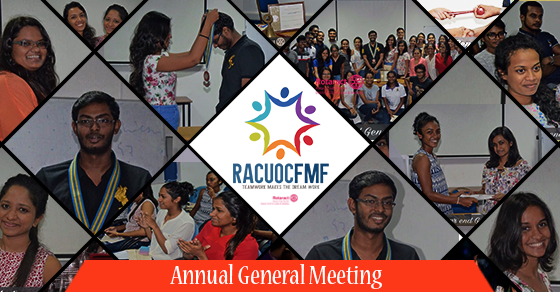 As we approach the end of the Rotaract year 2016/2017, I am reminded of this saying by an American journalist Hal Borland: “Year’s end is neither an end nor a beginning but a going on, with all the wisdom that experience can instill in us.” It is the same with our journey in Rotaract, as one year ends we will be moving on to the next with the experience we had, learning from our errors and knowing what to do next. Thus it is simply a continuation of the journey.


The meeting commenced with the speech of our very own outgoing President Rtr. Hiruni Perera. She took her time to thank each and every member of her board and all the club members for their continuous support throughout the year, emphasizing that it was more of a team work. She highlighted that 45 projects in total were completed throughout the year 2016/2017 and thanked everyone who contributed towards making those projects a success.


Next on the agenda was distribution of certificates to the chairpersons of the projects completed in the third and fourth quarters, to appreciate their hard work and dedication towards making those projects a success. Rtr. Shanal Mendis, Rtr. Amandi Umagiliya and Rtr. Chamini Abeysekara were recognized as the “Team players for the month of April” after which Rtr. Devmini Weerasuriya and Rtr. Uvini Liyanage were recognized as the “Rotaractors for the 4th quarter”.


Then, the outgoing Vice President Rtr. Dishan Leo addressed the gathering by summing up the Rotaract year. He thanked his team and wished the incoming President, his team and the club for a successful year ahead.

Next, Rtr. Hiruni Perera officially collared the incoming President, Rtr. Akhila Wijethunga by handing over the gong, gavel and the charter certificate of the club, after which he assumed his duties as the President for the Rotaract year 2017/18 with the promise of not only to keep up with the standards set by the past presidents and members, but to take the club up to a whole new level in the upcoming year.


Rtr. Akhila Wijethunga thanked the outgoing President and her board for their continuous contribution towards taking the club to greater heights by building the club up from the foundation laid by the precedent members. Then, he introduced the new board for the year 2017/2018. He requested his members to always remember “Why you are in Rotaract?” and concluded his speech by highlighting the fact that each member should try to get the best out of Rotaract.


Finally, as a small token of appreciation, “Thank you” cards were given to the outgoing board by the incoming board, for their continuous commitment and hard work towards making a memorable Rotaract year.

We thank all our beloved outgoing members for their utmost support and dedication right from the beginning and we would like to extend our best wishes for their future endeavors.