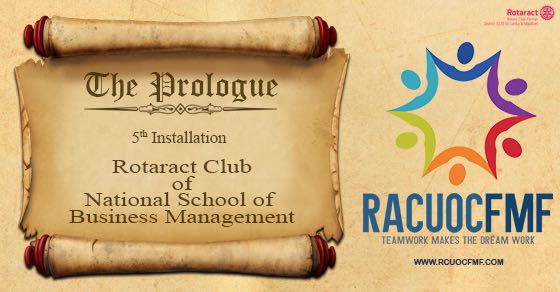 Posted at 07:47h in Installations, Others, Uncategorized by rcuocfmfadmin 0 Comments
The 5th installation ceremony of the Rotaract Club of National School of Business Management was held on the 4th of July 2017, from 6.00 pm onwards, at the DHPL Auditorium. On behalf of our club, Rtr. President Akhila Wijethunga, Rtr. Sandunika Wijebandara and Rtr. Shanal Mendis attended the event.
The event commenced with the lighting of the oil lamp by the dignitaries followed by the flag salutation, Rotaract invocation, four way test and the Rotaract song. The dignitaries for the evening were, Chief Guest, Rtn. President Chamath Kulasinghe, District Youth Service Chair Rtn. Satyajit Seneviratne, District Rotaract Committee Chair Rtn. PP Bobby Shrinivas and District Rotaract Representative Rtr. PP Anuradha Senanayake.
The gathering was warmly welcomed by Rtr. Lahiru Ranathunge, where he thanked all the participants and said that the club respects and admires the efforts and ethos others share to increase the level of visibility of the club. Subsequently, the Secretary’s report was presented by the outgoing Secretary Rtr. Carine Anandage and she highlighted the fact that they were able to successfully complete 27 projects, excluding the “Vision to Action” project, during their term which included 5 club service projects, 11 community service projects and 4 professional development projects. Some of their signature projects were “Flair 2016” under Club Service Avenue, “Manusathkara” under Community Service Avenue and they also  hosted a number of District projects like “Leader in me” and “Muay Thai”.
Next, the outgoing President Rtr. Oshadha Abhayasundara addressed the gathering, where he thanked all the members, lecturers and parents for their continuous support and dedication extended during his tenure and shared some wonderful experiences he gained through his amazing Rotaract Journey.
Rtr. Piyath Gunawardane then introduced the incoming President Rtr. Thilina Ahangama who was a student of Trinity college and one of the most active and dedicated Rotaractors. Then, the incoming President addressed the gathering and admired the job done by the outgoing President and his board. He also stated that his focus will be on innovation, sustainability and creativity along with technology. Next, he introduced his Board of Directors for the year 2017/18, which is as follows;
Next, the District Rotaract Representative Rtr. PP Anuradha Senanayke addressed the gathering. She recognized the importance of clubs and their membership to the District. She appreciated the Rotaract club of NSBM for the support they have rendered so far and shared her experiences with the Past Presidents and the newly appointed President of the club and appreciated their talents. She also congratulated the Rotaract club of NSBM for all the good work they have done through their projects such as “Mentor”, “Dream Cricket” and “One love”. Then, she extended her gratitude for the Parent Rotary club, the Rotary Club of Colombo West and the parents of Rotaractors for their immense support and wished all the very best for the new Board.
Afterwards, District Rotaract Committee Chair Rtn. PP Bobby Shrinivas took the podium where he spoke about the challenges that the new Board might have to overcome in order to keep up the good work. He stated that the priorities of the club should be strengthening the club, enhancing the image of the club and attracting more members while taking the maximum use of resources. He concluded his speech by congratulating the newly appointed Board.
Then, the gathering was allured by an entertaining song performed by Rtr. Sarah Hettiarachchi.
Subsequently, the Chief Guest for the evening, Rtn. President Chamath Kulasinghe addressed the gathering. He commenced his speech by explaining the importance of Rotaract. He admired the contribution of the club’s signature projects such as “Mentor” and “Rotaract dream cricket committee” which contributed in bringing the youth in the Rotaract movement closer. Finally, he extended his gratitude to the outgoing Board and wished good luck for the new Board for a successful year.
Then, tokens of appreciation were distributed to the dignitaries of the event which was followed by felicitations to the newly appointed Board by the Rotaract Clubs present at the ceremony. To mark the end, vote of thanks was delivered by the Secretary, Rtr. Matheesha Pathmaperuma.
The Rotaract Club of University of Colombo, Faculty of Management & Finance, wishes Rtr. Thilina Ahangama and his Board an amazing Rotaract year ahead.
Written By –
Clicks By – Flexus Labs