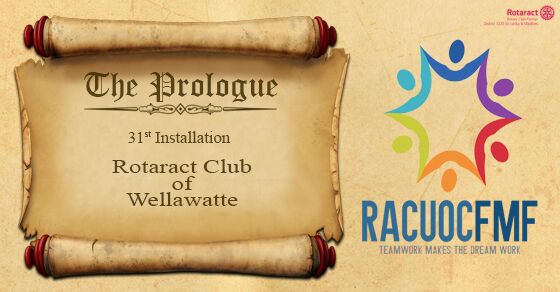 Posted at 15:21h in Installations, Others, Uncategorized by rcuocfmfadmin 0 Comments
The 31st installation ceremony of President Rtr. Venushajan Santhirasegaram and his Board of Directors of the Rotaract Club of Wellawatte for the year 2017/18 was held on the 8th of July 2017, at the Lakshman Kadiragamar Institute, Colombo. Rtr. Sandunika Wijebandara attended the event representing our club.
The proceedings for the day began with the lighting of the oil lamp by the dignitaries followed by the flag salutation, Rotaract invocation, four-way test and the Rotaract song. The dignitaries were then invited to take their respective seats at the head table.
Rtr. Kumararuban Nanthagopal then warmly welcomed the gathering as the Chairperson of the installation ceremony, after which the Secretary’s Report for the year 2016/17 was presented by Rtr. Christopher Surendran who highlighted that the Club has been able to show a great improvement in financial and membership aspects. According to him, signature projects “Wella Pongal” and “I am a Special Child” has been carried out to a whole new level last year. The audience was given a glimpse of all the projects carried out in the year 2016/17 by playing a small video clip.
Next, the outgoing President Rtr. Vidyas Gnanasekaram was called upon to address the gathering. He pointed out how the Rotaract year 2016/17 has given him the platform to develop his personality, knowledge and skills by ultimately giving something back to the community. He wished the incoming Board all the best for their term and extended his gratitude and thanks to the outgoing Board for the support that was given in the past year. Tokens of appreciation were given away to the outgoing Board in recognition of their efforts during the past term.
Following on, he collared the incoming President, Rtr. Venushajan Santhirasegaram, thereby officially handing over the responsibilities of the club for the year 2017/18 and then the new Board for the year was inducted. The Board of Directors of the Rotaract Club of Wellawatte for the year 2017/18 is as follows:
After the induction, District Rotaract Representative, Rtr. PP Anuradha Senanayake addressed the gathering. In her speech, she highlighted how Rotaract club of Wellawatte has always striven towards recognizing young individuals with strength and developing them into responsible human beings. She also spoke about the club’s unbeatable legacy with recent DRRs’ such as Rtr. Sathiyeandra Tharmekularajasingha. She congratulated the President and his newly appointed Board all the very best for the Rotaract year 2017/18.
Next, the District Rotaract Committee Chair, Rtn. PP. Bobby Shrinivas addressed the gathering, commending the club for their many great achievements and endeavors while congratulating Rtr. Vidyas Gnanasekaram and his team on completing a successful year in Rotaract. He concluded his speech wishing the newly appointed Board and stated that his fullest cooperation and support will be given to the club in the future.
An entertainment item followed up the speech, which was a performance by Mr. Reginold Eroshon (GK) that brought a message about suicide prevention. Before he concluded his performance, he invited the gathering to give their support and volunteer for a campaign on suicide prevention called “It’s not the answer”.
Lined up next, was the address by the District Youth Service Chair who was also the Guest of Honor, Rtn. Satyajit Senevirathne who once again congratulated the outgoing Board of the club and wished the newly appointed Board while highlighting how the club has achieved greater heights in Rotaract and the impact they have made on the society through their quality projects. He gave a message about the importance of suicidal awareness by giving one of his life experiences, supporting Mr. Reginold Eroshan. He also mentioned that the club has been able to produce good leaders, and took himself as an example and showed the importance of Rotaract for personality development.
Finally, the Chief Guest for the evening, Rtn. Champa Perera, President of Rotary Club of Mount Lavinia for the year 2017/18 addressed the gathering, speaking of the importance of Rotaract in professional and personal development of the youth. She also emphasized the important role the youth can play in Rotary apart from Rotaract thereby requesting all Rotaractors to join the Rotary movement and concluded her speech acknowledging the work of the outgoing President and his team and congratulating the newly appointed Board for a successful year ahead.
The floor was then open for felicitations and the installation was brought into a successful end with the vote of thanks by the Secretary for the year 2017/18, Rtr. Kayalvili Mathavaram, followed by the National Anthem.
The Rotaract Club of University of Colombo, Faculty of Management and Finance wishes Rtr. Venushajan Santhirasegaram and his Board all the best for a successful year ahead.
Written By –
Clicks By – Flexus Labs