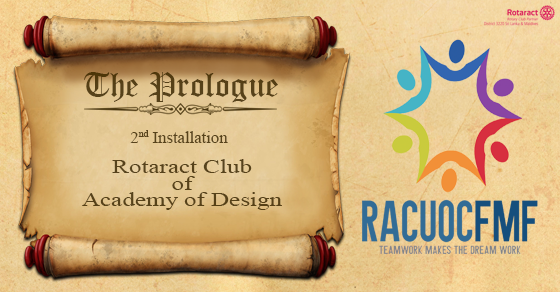 Posted at 02:29h in Installations, Others, Uncategorized by rcuocfmfadmin 0 Comments
The 2nd installation ceremony of President Rtr. Sasanka Edirisinghe and his Board of Directors for the year 2017/18 was held on the 20th of July 2017, at the Orchid Hall, BMICH. Rtr. President Akhila Wijethunga, Rtr. Amry Asif, Rtr. Ayesha Samaratunge and Rtr. Amandi Umagiliya attended the event representing our club.
The proceedings for the evening began with the lighting of the oil lamp by the dignitaries followed by the flag salutation, Rotaract invocation, four – way test and the Rotaract song. The dignitaries were then invited to take their respective seats at the head table.
Then, the audience was warmly welcomed by Rtr. Ravisha De Silva, the Chairperson of the Installation Ceremony followed by the Secretary’s Report for the year 2016/17 presented by the outgoing Secretary, Rtr. Sajani Pathirana. She highlighted the projects carried out and the club’s successful growth during its first year of operation where the club was awarded for the Most Outstanding Cluster Project and the Self Chartered Club in the Rotary District 3220. The major projects carried out during the year includes “Open Mic”, “Rubix classroom project” and “Inter District Youth Exchange Programme” held in Pakistan.
Lined up next, was a charming introduction to the outgoing President Rtr. Sneha Moorjani by Rtr. Catorina Canagasabey which made it clear how awesome she is both as a leader and also as a friend.
Next, the outgoing President Rtr. Sneha Moorjani was called upon to address the gathering. She started off saying that the past year has given her the opportunity to develop friendship and fellowship and it has not just made her a better Rotaractor, but also a better citizen to the community. She further thanked and expressed her gratitude to everyone who supported her throughout the journey, especially for her outgoing Board and wished the incoming Board all the best for their term. Tokens of appreciation were given away to the outgoing Board in recognition of their efforts during the past term.
Following on, she collared the incoming President, Rtr. Sasanka Edirisinghe, thereby officially handing over the responsibilities of the club for the year 2017/18 and then the new Board for the year was inducted.
The Board of Directors of the Rotaract Club of AOD for the year 2017/18 is as follows:
The gathering was subsequently addressed by the newly installed President Rtr. Sasanka Edirisinghe where he took a unique and innovative approach to keep the audience with him. He emphasized that the Academy of Design has opened up possibilities across borders and Rotaract has given him the platform to be creative and implement changes. He congratulated and welcomed the newly elected Board and appreciated the job well done by the outgoing Board.
Lined up next, was the address by the DRR Rtr. PP Anuradha Senanayake where she highlighted the success story of the Rotaract Club of AOD. She also emphasized on the main projects undertaken by the club during the past year which included the cluster project “Level Up”, “Open Mic” and “Sustainable Development Week”. She acknowledged the hard work of the outgoing Board under the leadership of Rtr. Sneha Moorjani and wished best of luck to the newly appointed Board.
Next, the District Rotaract Committee Chairperson Rtn. PP Bobby Shrinivas addressed the gathering, appreciating the club for their many great achievements and endeavours while congratulating Rtr. Sneha and her Board for successfully completing a year in Rotaract. He widely stressed and encouraged the club to enhance the image of the club while wisely using the talent to empower the community.
Then, the Guest of Honour for the evening, Rtn. PHF PP Lakshman Gunawardena gave a mind blowing speech on how an individual can climb greater heights in life by overcoming weaknesses and failures. He pointed out the life stories of dignified celebrities around the world which inspired the audience. He also congratulated the outgoing Board and wished all the best for the incoming Board.
Finally, the Chief Guest for the evening, Mrs. Linda Speldwinde, the founder of AOD International Design Campus addressed the gathering, expressing her humble pleasure on what Rtr. Sneha has achieved during her past term as the charter President of the club. She highlighted that the skill of design which the Rotaractors at AOD possess would help them to gain more success. She further pointed out the importance of idea implementation and innovation. She concluded her speech by wishing the newly installed Board best of luck.
The floor was then open for felicitations and the installation was brought to a successful end with the vote of thanks given by the Vice Secretary, Rtr. Bevan Johnathan David followed by the National Anthem.
The Rotaract Club of University of Colombo, Faculty of Management & Finance wishes Rtr. Sasanka Edirisinghe and his Board all the best for a successful year ahead.
Written By:
Clicks By: 3220R