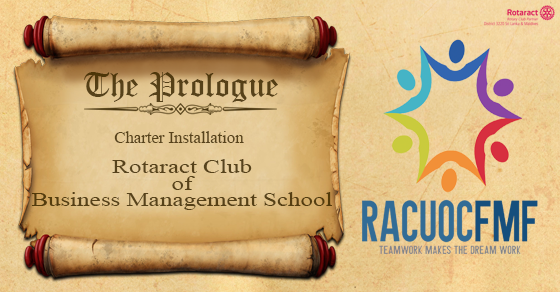 Posted at 10:16h in Installations, Others, Uncategorized by rcuocfmfadmin 0 Comments
The Charter Installation Ceremony of President Rtr. Sudharsha Madhurya and his Board of Directors for the year 2017/18 was held on the 22nd of July 2017, at the Lakshman Kadiragamar Institute, Colombo. Rtr. President Akhila Wijethunga & Rtr. Chamara Madusankha attended the event representing our club.
The proceedings for the day began with the lighting of the oil lamp by the dignitaries followed by the flag salutation, Rotaract invocation, four-way test and the Rotaract song.  The dignitaries were then invited to take their respective seats at the head table.
Then, the gathered audience was warmly welcomed by the Assistant Secretary, Rtr. Supunika Ranathunga followed by a fascinating introduction to the Charter President Rtr. Sudharsha Madhurya by the Vice President Rtr. Binura Perera. It was quite an inspiring speech elaborating on his personality, achievements and his vision.
Following on, the charter President was collared by the Chief Guest of the ceremony, Rtn. PHF Indrajith Fernando. Rtr. Sudharsha Madhurya, then addressed the gathering expressing the joy he felt in celebrating the charter installation as the the charter President of the club. In addition, he stressed on his hope of taking the club to its pinnacle while being concerned on rebuilding humanity.
Next as per the proceedings, the President was officially handed over the responsibilities of the club for the year 2017/18 and then the new Board for the year was inducted. Much glamour was added to the event by presenting an introductory video of each and every Board member.
The Board of Directors of the Rotaract Club of BMS for the year 2017/18 is as follows:
The gathering was subsequently addressed by the Chief Guest of the ceremony Rtn. PHF Indrajith Fernando, who expressed his pleasure on the leap taken by the BMS Institute in joining hands with the Rotaract vision to serve the community. He also commented on the inspiration and enthusiasm of the club in creating a difference. He further elaborated on the main projects that the Rotary club of Colombo East is yet to take up. He concluded his speech by wishing the newly installed Board best of luck.
Next, the District Rotaract Committee Chairperson, Rtn. PP Bobby Shirinivas appreciated the club for taking their lead in joining the Rotaract movement while highlighting the importance of joining as such. He also pointed out his confidence on the ability of the club to reach greater heights beyond everyone’s expectations. He too expressed his best wishes to the charter Board for many great achievements and future endeavours in empowering the community.
The Guest of Honour for the evening, Rtn. PHF. PP Rajendra Theagaraja gave a mind blowing speech on how Rotaractors can contribute to rebuild humanity by serving in the field of higher education. He also shared his success story in this regard pointing out how he contributed in sponsoring the University students on their higher education. His speech truly inspired the entire audience. He did not forget to wish all the very best for the newly appointed President and his Board for a glorious year ahead.
Finally, the DRR Rtr. PP Anuradha Senanayake addressed the gathering, where she expressed her pleasure on BMS Institute being passionate in extending their hands to join the Rotaract movement, to serve the community in a better way. She too added her thoughts on her belief that the young people with business knowledge have the creativity in organizing impactful projects and summed up saying that the club has all the potential to lever its position beyond expectations. She wished best of luck to the charter Board for a successful year ahead.
The floor was then open for felicitations and the installation ceremony was brought to a successful end with the vote of thanks delivered by the newly appointed Secretary Rtr. Dasuki Perera followed by the National Anthem.
The Rotaract Club of University of Colombo, Faculty of Management & Finance wishes Rtr. Sudharsha Madhurya and his Board all the best for a successful year ahead.