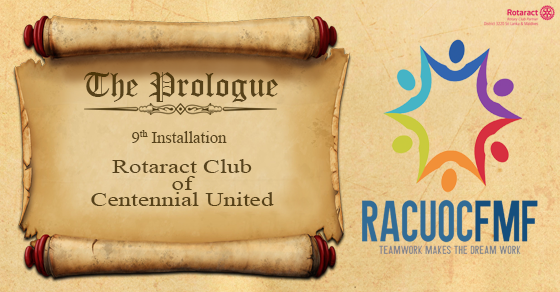 Posted at 16:08h in Installations, Others, Uncategorized by rcuocfmfadmin 0 Comments
The 9th Installation Ceremony of President Rtr. Suchithe Malawikankanamge and his Board of Directors for the term 2017/18 was held on the 25th of July 2017, from 6.30 pm onwards at the Royal Skills Centre. Registrations started at 6.00 pm and Rtr. Lakna Rajapakse, Rtr. Sarala Gunawardena, Rtr. Udanee Silva and Rtr. President Akhila Wijetunga attended the ceremony on behalf of the club.
The ceremony commenced with the lighting of the oil lamp by the dignitaries followed by the flag salutation, Rotaract invocation, four way test and the Rotaract Song. The Chief Guest for the evening was the President of Rotary Club of Colombo Centennial, Rtn. PP. Prasantha Lal De Alwis, and other dignitaries were District Rotaract Representative, Rtr. PP. Anuradha Senanayake, District Rotaract Committee Chair, Rtn. PP Bobby Shrinivas, Immediate District Rotaract Represenattive, Rtr. PP. Mohamed Husni and Rotary Youth Advisor, Rtn. Milindu Mallawarachchi.
After welcoming the gathering, the Secretary’s report for the term 2016/17 was delivered by the outgoing Secretary Rtr. Lahiru Abhayaratna following an eye catching video clip on the projects undertaken during the year.
Next, the outgoing President Rtr. PHF. Brintha Mathavasunderam addressed the gathering while emphasizing on what is Rotaract to her, what it has taught and what Rotaract has made her become. She recognized certain individuals and friends for the immense support rendered throughout the year and awarded tokens of appreciation to the respective individuals. Then, she introduced and collared the President for the year 2017/18, Rtr. Suchithe Malawikankanamge and officially handed over the duties and responsibilities of the club.
As President Rtr. Suchithe Malawikankanamge took the stage, he addressed the gathering inviting the members of the Rotaract fraternity to join hands with him, To Challenge! To Strive! To change our lives and and to engage for the betterment of the society. He then launched their main project for the year ‘Pavithra’, a project consisting of 3 phases, striving for a cleaner Sri Lanka. Next in line, was the introduction of the Board of Directors for the year 2017/18.
Board of Directors for the term 2017/18 is as follows;
Following the introduction of the Board, the District Rotaract Representative, Rtr. PP. Anuradha Senanayake addressed the gathering. She took the opportunity to congratulate Rtr. PHF. Brintha Mathavasunderam for a job well done and concluded her speech with the message, ‘‘Let us strive to engage Rotaract and challenge to redefine friendship through a positive change’’
Subsequently, District Rotaract Committee Chair, Rtn. PP Bobby Shrinivas was invited to address the gathering. In his speech he stated that consistency and discipline holds utmost importance when achieving our dreams and wished the new President and the Board to reach greater heights in Rotaract.
Next up on agenda, was the address by the Chief Guest for the evening Rtn. PP. Prasantha Lal De Alwis, who congratulated the outgoing Board and wished the newly appointed Board for an amazing year ahead while stating how impressed he is on the newly launched project ‘Pavithra’ and assured to extend his support towards this initiative.
Finally, tokens of appreciation were distributed to the dignitaries at the head table and the stage was open for felicitations. The Secretary for the term 2017/18, Rtr. Anushka Leelananda then delivered the vote of thanks to mark the end of the ceremony followed by the National Anthem.
The Rotaract Club of University of Colombo, Faculty of Management and Finance wishes Rtr. Suchithe Malawikankanamge and his Board a successful year ahead.
Written By: