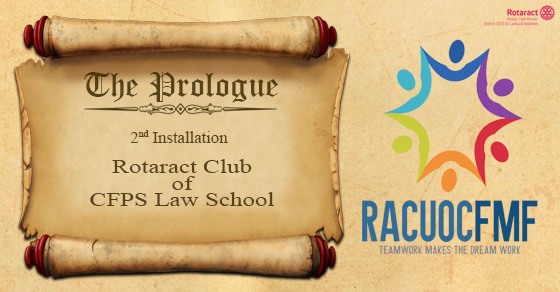 Posted at 09:32h in Installations, Others, Uncategorized by rcuocfmfadmin 0 Comments
The 2nd installation ceremony of President Rtr. Saaliyah Mohideen and her Board of Directors for the year 2017/18 was held on the 2nd of August 2017, at the DHPL Auditorium, Colombo. Rtr. Kalani Perera, Rtr. Amandi Umagiliya and Rtr. Savini Malalarathna attended the event representing our club.
The proceedings for the day began with the lighting of the oil lamp by the dignitaries followed by the flag salutation, Rotaract invocation, four-way test and the Rotaract song. The dignitaries were then invited to take their respective seats at the head table.
Rtr. Shashini Suwaris, the Club Service Director for the year 2017/18, then warmly welcomed the gathering. Afterwards, the Secretary’s Report for the year 2016/17 was presented by Rtr. Abeebha Ilyas along with a video clip highlighting the projects carried out during the year. Some of the major projects carried out were, “Jingles”, “Reach out 2017”, “Aid to Serve” and “Fandom”.
Next, the outgoing President Rtr. Nilushi Dewapura was called upon to address the gathering. She gave a brief introduction to the incoming President and assured that she would be the perfect President any club could wish for. She also wished the incoming Board all the best for their term and extended her heartiest gratitude and thanks to her very own Board for the support that was given in the year just concluded.
Following on, she collared the incoming President, Rtr. Saaliyah Mohideen, thereby officially handing over the responsibilities of the club for the year 2017/18 and then the Board for the year 2017/18 was inducted.
The Board of Directors of the Rotaract club of CFPS Law School for the year 2017/18 is as follows:
Subsequently, the Chief Guest for the day, President of the Rotary Club of Colombo West, Rtn. PHF Indrajith Fernando, addressed the gathering, admiring the way in which the installation had been organized. He briefed some important facts regarding the history of Rotaract and discussed the potential of Rotaract clubs to develop and help the community. He also suggested some ways as to how the club can work collaboratively with other Rotaract clubs. Finally, he did not forget to appreciate how well the outgoing President and her Board performed their duties during their first year of operation.
Then, the gathering was addressed by the District Rotaract Reprsentative Rtr. PP Anuradha Senanayake where she highlighted the importance of balancing both academic and extra -curricular activities. She specified on the theme of Rotary International for the year 2017/18, “Rotary making a difference” and highlighted how the Rotaract District is planning to make a difference by “Engaging in Rotaract and Redefining Friendship”.  She also acknowledged the work of the outgoing Board under the leadership of Rtr. Nilushi Dewapura by admiring their signature projects such as “Jingles” and “Deep Mind” and also wished all the best for the newly appointed Board.
Next, the District Rotaract Committee Chairperson, Rtn. PP Bobby Srinivas addressed the gathering, congratulating the newly appointed Board and admiring the job well done of the outgoing Board. He emphasized on the importance of integrity when making a decision and requested to employee resources and relationships efficiently and effectively to enhance the image of the club. He also stressed on the importance of initiating quality projects, raising funds and collaborating with other Rotaract clubs.
The floor was then open for felicitations and the installation was brought to a successful end with the vote of thanks given by the Joint Secretaries for the year 2017/18, followed by the National Anthem.
The Rotaract Club of University of Colombo, Faculty of Management and Finance wishes Rtr. Saliyaah Mohideen and her Board all the best for a successful year ahead.