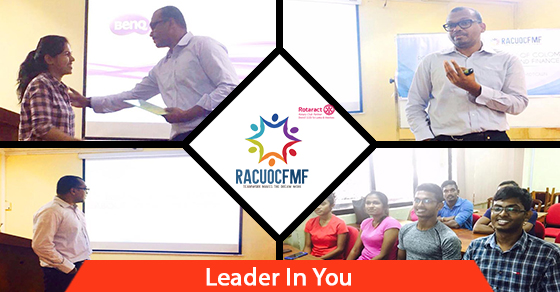 Posted at 13:04h in Avenues, Professional Development, Quality Education, SDGs, Uncategorized by rcuocfmfadmin 0 Comments
“Don’t judge your life based on someone else’s life story. All of us have our own stories to write and everyone will have their fair share of joy, happiness, sadness and misery.”
– Rohan Jayaweera –
Leader in You, our first Professional Development project for the term, was held on the 16th of August, at the faculty premises. It was held with the objective of providing the inspiration and direction needed to kick start the new term and to invoke the club members’ desire to one day become great leaders.
The session was conducted by none other than Mr. Rohan Jayaweera, who I would say is the definition of the words ‘humble’ and ‘bold’ and is without a doubt a great example of a leader. Humble, because at the beginning of his speech, he admitted that irrespective of all the accomplishments he has thus far achieved, he is still a ‘work-in-progress’ and is learning everyday to improve himself as a leader and a human being. Bold, because despite of having had an exceptional career in several Fortune 500 companies, he decided to go down an untraveled path, two and a half years back, in co-founding his very own digital marketing agency, Antyra Solutions Pvt. Ltd, in a time where digital marketing was not very popular in the country.
The sincerity with which Mr. Rohan Jayaweera talked about his life journey and all the challenges he faced, surely touched the hearts of the 50 odd FMFers who came that evening; especially since everything he said was so relatable and genuine and there was so much we could learn through each phase of his life.
Here are the main takeaways of the session;
1. Never try to be like others
Each and every one of us aspires to be leaders; we all dream of being the next Martin Luther King or Elon Musk, with the hope of making our mark in the world. However, a key thing about being a great leader is being true to one’s individuality and uniqueness and not trying to copy the leadership styles of others. It is good to admire certain leaders and to draw inspiration from their stories, but trying to mimic them will most likely not get you where you want to be, because hey! at the end of the day, we are all one of a kind.
2. Benchmark yourself against a great leader
Through the years, many great leaders have walked this earth; from the likes of Mahatma Gandhi to Margaret Thatcher to Steve Jobs. Although there is so much we could learn from each one of these great men and women, it is important for us to benchmark ourselves against a more contemporary leader, as the circumstances that exist now are quite different from what they used to be. Today, we live in a very volatile society with a lot of confusions and complications and therefore, following the life of a leader who has been through the same or rather similar realities would make more sense.
3. Find yourself a mentor
A mentor is not someone who tells you what to do. Instead, it is someone who would give you advice and insights that would help you navigate through the different phases of life. There is no shame in getting mentorship and it would do you well to select someone who you look up to and trust, in helping you reach your potential and aspirations sooner.
4. Take risks
One key factor that distinguishes a leader from other people is the fact that, leaders are willing to take risks and chances other people would not even think of. Therefore, in order to be a great leader, one should adopt the attitude of “there’s no such thing as a challenge too big to handle or a job too small to do” and should put themselves in uncomfortable positions from early on, because as Mr. Rohan rightfully mentioned;

“We are a product of the environment, experiences, struggles and the victories we go through and all the risks I’ve taken along the way, is what has made me who I am today…”
5. Develop the ability to talk to people at an emotional level
Most people do not alter their behaviour when addressed with rational and logical reasoning; therefore, to become an impactful leader, one should develop their skills of speaking to the emotions of a person, as it is only then that people will follow you. Having the right communication and interpersonal skills would lead to inspiring people and helping them see things in an entirely different way, which would ultimately want people to follow you as a leader.
6. Complaining is never an option
Most of us want the world to be a certain way, rather than accepting things the way they are. Nevertheless, when certain things do not happen the way we planned or wanted, moping around and crying about it should never be the answer. A great leader would never complain about how the world is; instead, he or she would either adjust, change the way they think or make compromises in the decisions they make and learn to live with the consequences.
7. Never stop learning and improving
A vital factor for earning respect from others is to know more than them and in order for you to do that, you should have an undying hunger and curiosity for knowledge and should be willing to put in an effort to develop yourself every day. The day you stop improving yourself is the day you stop being a great leader, since learning is an important part of leadership.
8. Believe in yourself
A great leader should firmly believe beyond any doubt, that he or she is good enough to get the job done. The journey to becoming successful will not be an easy one; there will be times when you would doubt yourself and times when those around you would ridicule you for having larger than life dreams. However, a leader would push through these tough times with perseverance and conviction and stop at nothing, till what they want is achieved.
The one and a half hours we spent listening to the incredible life story of Mr. Rohan Jayaweera was indeed a great investment; we listened with much enthusiasm, learnt a great deal and laughed a countless number of times and I am sure, by the end of it, all the participants were truly inspired to take a stride towards reaching their potential.
Written By:

Here’s wishing Rtr. Melan Perera
a very Happy Birthday!🎉
May your day be filled with the brightest of blessings for an incredible and fun filled year ahead!❤🎊

Thank you Rotaract Club of the Faculty of Management and Finance ❤️

Join the workshop organized by RACUOCFMF, to learn all about how to “BRAND YOURSELF” on 21st January at COCO Space from 5pm onwards.

Rangoli 2020–Light Up My World🪔 - A wonderful project which tugged our heart strings, that even DRR. Rtr. PP. Krishan Bala did not regret going to despite missing a friend’s wedding!👀

To know what was so special about it, click on the link below!

Kudos to the Rotaract Club of Centennial United! What better way to celebrate the month of a new beginning and the Thai Pongal season by offering hope and love to those in dire need of them to prosper in life.♥💫

“Rangoli – Light up my world” organized by the Rotaract Club of Centennial United successfully happened for the 3rd consecutive year on the 12th of January at Idea Hell from 6.00 p.m onwards. Like how a variety of colours seamlessly harmonised in to the magnificent …