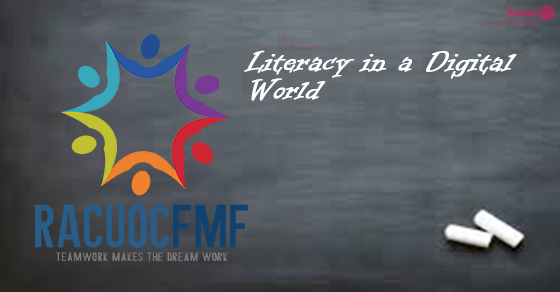 30 Sep Literacy in a Digital World – Are we literate enough?

Posted at 12:21h in Featured, Uncategorized by rcuocfmfadmin 0 Comments
The UNESCO celebrated the International Literacy Day on the 8th of September 2017, at their Headquarters in Paris, under the theme “Literacy in a digital world” with the aim of looking at the skills needed for people to navigate the todays digitally-mediated world. This article focuses on Sri Lanka’s position and Rotaract’s involvement in improving the country’s status in such a world.
Definition of literacy
Although we as Sri Lankans take pride in our very high youth literacy rates of 97.7% for young males between the ages of 15-24 years and 98.6% for young females of the same age category, it is questionable whether these numbers could reflect the true status of the country under a very literal definition: “ability to read and write at the age of 15”.


The UNESCO on the other hand has a broader definition. It defines literacy as the “ability to identify, understand, interpret, create, communicate and compute using printed and written materials associated with varying contexts.”


Literacy in a digitized Sri Lanka
Sri Lanka is slowly but steadily becoming a more digitalized nation, with 95.8% of the population being mobile phone users, 18.3% of the population being internet users and a household without a television being a rarity.
The digital environment has opened doors into many new avenues, including access to information and knowledge, which allows people to gather a quick and more deep understanding about a certain context and to improve their living standards by being exposed to the life styles of other people and new findings.
Digitization has also played a huge role in networking and involvement in social services which was clearly seen during crisis. It has allowed people to communicate easily and make more informed decisions in terms of social connections.
Furthermore, digital platforms has allowed many people to work from the comfort of their own homes, thus bringing relief to women who are forced to choose between a career and family, and to full time students who wish to acquire practical knowledge and earn some money.


Despite all the above pros, digitization could have some serious negative effects if not handled with care and monitored properly.


One of such concerns even the UNESCO fears is the marginalization of communities who does not have access to digital media, which could become a potential platform for discrimination. Another major concern is the increasing level of cyber-bullying which is not at all an intended outcome of digitization.
Research has also shown that excessive use of digital media has resulted in problems with spelling, grammar, syntax and other important aspects of writing.

Rotaract’s role in improving literacy in a digital world

Rotaract clubs today, uses digital platforms for many innovative initiatives which has allowed their members to explore the depths of the digital world. Some of the best examples of such innovative initiatives for the year includes, the virtual reality invitation sent out for the installation ceremony of the Rotaract Club of Midtown and the digitalization of the installation souvenir of our own club, which were praised by the District, thus motivating the clubs to do more and more innovations through digital platforms.
It is also a common sight to see clubs initiating projects to educate their members about the digital environment. Some of them include IT workshops and educational speeches at meetings such as the speech on “Cyber-bullying” which was done at the Midtown family meeting held this month.


One of the main paths our own club chooses to strike a good balance between literacy and the use of digital platforms is none other than our own blog for which all the members are encouraged to write articles and thus encouraged to improve research, reading and writing skills.


While the clubs has initiated a number of plausible projects to improve the literacy levels through community service projects such as “Share|Care|Smile” done by our own club partnering with the Rotaract Club of Hyderabad and “Grama prabodaya” done by the Rotaract club of University of Moratuwa, we feel that it’s time that Rotaract clubs take the next step of improving literacy of these communities in terms of digital platforms.


In a concluding note, the Rotaract Club of University of Colombo Faculty of Management and Finance applaud all the clubs who had done a great deal to improve the literacy levels of the country and we invite the Rotaract community to join and become the change agents to improve the country’s status in this digital world.