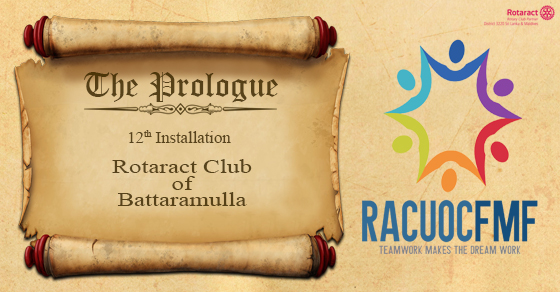 Posted at 13:38h in Installations, Others, Uncategorized by rcuocfmfadmin 0 Comments
The 12th installation ceremony of the Rotaract Club of Battaramulla was held on the 30th of July, from 3.30 pm onwards, at the Royal College Union Skills Centre, Colombo. Rtr. President Akhila Wijethunga, Rtr. Amali Punyadasa, Rtr. Anjana Ramanayake and Rtr. Charika Karunaratne attended the event on behalf of our club.
The event commenced with the arrival of the Chief Guest and the other dignitaries for the evening. The commencement was followed by the lighting of the traditional oil lamp after which the following dignitaries were invited to take their respective seats at the head table; Chief Guest, President of the Rotary Club of Battaramulla Rtn. PHF Warren Solomonz, District Rotaract Committee Chair Rtn. PP Bobby Shrinivas, District Rotaract Representative Rtr. PP Anuradha Senanayake, President of the Rotaract Club of Battaramulla for the year 2016/17 Rtr. Sudarshan Lechmunadan and President of the Rotaract Club of Battaramulla for the year 2017/18 Rtr. Navidu Hettiarachchi.
The proceedings of the ceremony commenced with the reading of the flag salutation, Rotaract invocation and the four way test, by Rtr. Dinishini Perera followed by the Rotaract song.
The project chairperson of the installation ceremony Rtr. Deve Sathasivam then warmly welcomed the gathering and expressed his pleasure to have the participation of all at their gracious occasion.
Subsequently, the Secretary’s report for the year 2016/17 was delivered by the outgoing Secretary Rtr. Hafiz Saleem. He stated that the Rotaract year 2016/17 has been a wonderful year which made changes to the members of the Rotaract Club of Battaramulla and also to the Club itself. They have been able to complete an immense number of projects from painting pagodas to helping furry little friends and helping Rotaractors in their projects. The success of the projects completed was showcased to the audience through a short video clip. “Paws for a cause”, “Drops of hope”, “Gamai Pansalai” are some of the outstanding projects through which the club has rendered their helping hand to the community.
Next, the gathering was addressed by the outgoing President, Rtr. Sudarshan Lechmunadan where he shared the experience he gained during the past term. He emphasized that each project carried out by the club has become a learning experience to its members and explained how they faced the challenge of being accountable for each project, while saving the society. He expressed his gratitude to all those who have guided, mentored, encouraged and supported him throughout the past Rotaract year. He also wished the incoming President and his Board for a successful year ahead.
Following on, Rtr. Deve Sathasivam introduced the 12th incoming President of the Rotaract Club of Battaramulla, Rtr. Navidu Hettiarachchi. In his speech the incoming President expressed that according to his perspective, Rotaract is a ‘University of a Society’ where multicultural people get together and work as one, in a way the culture or the creed does not matter.
Next in line was the induction of the Board of Directors for the year 2017/18 which consists of the following Rotaractors.
After the induction, the gathering was addressed by the District Rotaract Representative, Rtr. PP Anuradha Senanayake. She highlighted the fact that the Rotaract Club of Battaramulla has reached the extent of redefining the avenues of services and congratulated the club on their great achievements. In her speech, she stated that Rotaract is a platform to understand the ethnic and religious diversities and is a movement for peace and reconciliation. She emphasized that, Rotaract is not just another service organization, but is an organization to develop ourselves and to put up our passion in to action.
Next, the podium was taken up by the Guest of Honor, District Rotaract Committee Chair Rtn. PP Bobby Shrinivas. He stated that it is important to concentrate on enhancing the image of Rotaract and also the own Club image in order to get more members, funds and also to execute projects easily. He concluded his speech by conveying his wishes to the newly appointed Board.
The speech was followed up by an entertainment item which was performed by Rtr. Elon Newton.
Subsequently, the Chief Guest for the evening, President of the Rotary Club of Battaramulla Rtn. PHF Warren Solomonsz was introduced by Rtr. Dinishini Perera.
In the speech of Rtn. PHF Warren Solomonsz, he mentioned that Rotaract is a global effort to bring peace and international understanding to the world. He stated that development of professional and leadership skills, development of knowledge and understanding of needs, problems, and opportunities of the community, building lifelong friendships, and uncovering new experiences are some of the goals of Rotaract.
After distributing tokens of appreciation to the dignitaries, a special performance was done by Rtr. PP Gadjen Suryakumar as a surprising felicitation to the incoming President. Then the podium was opened up for felicitations to the newly appointed Board by the Rotaract Clubs present at the ceremony. It was followed up by another entertainment session.
The 12th installation ceremony came to a conclusion with the vote of thanks delivered by the Secretary for the year 2017/18, Rtr. Oshada Pandithage, followed by the National Anthem. Then the installation ceremony was terminated for refreshments and fellowship.
The Rotaract Club of University of Colombo, Faculty of Management and Finance conveys its best wishes to the incoming President Rtr. Navidu Hettiarachchi and his Board for a successful year ahead.
Written By: