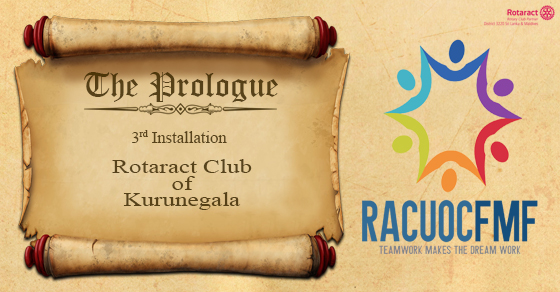 Posted at 07:17h in Installations, Others, Uncategorized by rcuocfmfadmin 0 Comments
The 3rd installation ceremony of President Rtr. Anjana Senanayake and his Board of Directors for the year 2017/18 was held on the 6th of August 2017, at the Hotel Blue Sky, Kurunegala. Rtr. President Akhila Wijethunga, Rtr. Malinda Wickramarachchi and Rtr. Vismini Mohottige attended the event representing our club.
The proceedings for the day began with the lighting of the traditional oil lamp by the dignitaries followed by the flag salutation, Rotaract invocation, four-way test and the Rotaract song. The dignitaries were then invited to take their respective seats at the head table.
Rtr. Milinda Illesinghe warmly welcomed the gathering as the Chairperson of the installation ceremony, after which the Secretary’s Report for the year 2016/17 was presented by Rtr. Pavithra Thilakarathne. She emphasized on the fact that the club had been able to show a great improvement in both financial and membership aspects during the past year. According to her, their signature project “Smiles to Flowers” had been carried out to a whole new level last year. The audience was given a glimpse of all the projects carried out in the year 2016/17 by playing a small video clip.
Next, the outgoing President Rtr. Dilan Moragolle was called upon to address the gathering. He shared some wonderful experiences he gained through his Rotaract journey and also emphasized on how they made a strong foundation for the future of the club. He wished the incoming Board all the best for their term and extended his gratitude and thanks to the outgoing Board, District Committee and his parents for the continuous support and dedication that was given throughout the past year.
Rtr. Damion Weerakoon then introduced the incoming President Rtr. Anjana Senanayake who was a student of Maliyadeva College and one of the most active and dedicated Rotaractors. Then, the incoming President addressed the gathering and admired the job well done by the outgoing President and his Board. He also stated that the main aim of the club for this year would be to highlight the value of Rotaract and to encourage the youth in Kurunegala to engage in Rotaract, not only as a community service, but also as a means of capacity development. It is with this objective in mind, they have chosen their theme for the year as “Unite. Rise. Empower” as it captures the essence of their vision coupled with sustainability.

Next, he introduced his Board of Directors for the year 2017/18, which is as follows;
After the induction, District Rotaract Representative, Rtr. PP Anuradha Senanayake addressed the gathering. In her speech, she highlighted the popularity of the Rotaract club of Kurunegala for its innovative projects that make a positive influence on the lives of the community. She also wished the President and his newly appointed Board all the very best for the Rotaract year 2017/18.
Then, the gathering was allured by an entertaining song performed by Rtr. Kalpani Weerasekara, Rtr. Vishwa Gopallawa and Rtr. Thanuja Kotawelagedara.

Afterwards, the Guest of Honor Mr. Chandra Jayasekara [President’s Council LL.B (COL.), LL.M (COL.)] took the podium where he appreciated the invaluable services rendered by the young members of the club. He stated that the success of a club is a result of the untiring efforts of the young, energetic, devoted and enthusiastic members. He concluded his speech by congratulating the newly appointed Board.
Finally, the Chief Guest for the evening, President of the Rotary Club of Kurunegala for the year 2017/18 Rtn. PHF Chaminda Ranaweera addressed the gathering, speaking of the importance of Rotaract in professional and personal development of the youth. He also stated that most of the great leaders have started their journey from Rotaract by dedicating their time and effort for the success of the club and he concluded his speech acknowledging the work of the outgoing President and his Board and congratulating the newly appointed Board for a successful year ahead.
The floor was then open for felicitations and the installation was brought to a successful end with the vote of thanks delivered by the Vice Secretary for the year 2017/18, Rtr. Deshanee Karunarathne, followed by the National Anthem.
The Rotaract Club of University of Colombo, Faculty of Management and Finance wishes Rtr. Anjana Senanayake and his Board all the best for a successful year ahead.