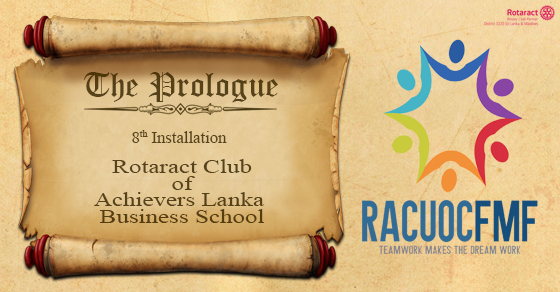 Posted at 13:11h in Installations, Others, Uncategorized by rcuocfmfadmin 0 Comments
The 8th installation ceremony of President Rtr. Laila Zafir and her Board of Directors for the year 2017/18 was held on the 7th of August 2017, from 4.00 pm onwards at the Royal College Union Skills Centre, Colombo 7. President Rtr. Akhila Wijethunga, Rtr. Isuri Alahakoon, Rtr. Manahari Singarachchi, Rtr. Medhani Balasooriya, Rtr. Kavindi Hansini and Rtr. Hasangi Tennakoon attended the event on behalf of our club.
The proceedings for the day began with the lighting of the oil lamp by the dignitaries followed by the flag salutation, Rotaract invocation, four way test and the Rotaract song. The dignitaries were then invited to take their respective seats at the head table.
The gathering was then warmly welcomed by Rtr. Tharindi Thalahity and Rtr. Mohandas Jeyakumar; the co – chairpersons of the installation ceremony. Afterwards, the Secretary’s report for the year 2016/17 was presented by the outgoing Secretary Rtr. Laila Zafir. She stated that the year 2016/17 has been a wonderful year in which they have been able to complete an immense number of projects while securing several awards. Their project “Conquer Colombo” won the People’s Choice Award for the Most Outstanding Club Service Project in South Asia and the Platinum award for the Most Outstanding Club Service Project of the year.
Next, the gathering was addressed by the outgoing President, Rtr. Maneesha Abeyrathne where she shared her experiences during the past year. She stated that it was a year which witnessed a lot of ambition, struggles, obstacles, criticisms, success and above all inspired teamwork. She expressed her gratitude to all those who have guided, encouraged and supported her throughout the past Rotaract year. She also wished the incoming President and her Board for a successful year ahead.
Following on, she collared the incoming President Rtr. Laila Zafir, thereby officially handing over the responsibilities of the club for the year 2017/18.
Then the audience was addressed by the President for the year 2017/18 Rtr. Laila Zafir. She extended her gratitude to all those who helped and supported her in every step of her journey to achieve what she has accomplished today. She further stated that she expects to take the club to greater heights during the year under the theme, “Aspire to Inspire”.
Next in line was the induction of the Board of Directors for the year 2017/18 which consists of the following Rotaractors.
After the induction, the gathering was addressed by the District Rotaract Representative Rtr. PP Anuradha Senanayake. She highlighted the fact that the Rotaract Club of Achievers Lanka Business School has always been a club of greater value in the District because of  their inspirational and impactful projects. Also she congratulated the Immediate Past President Rtr. Maneesha Abeyarathne and wished the newly appointed Board headed by President Rtr. Laila Zafir for a successful year ahead.
Next, the District Rotaract Committee Chairperson Rtn. PP Bobby Shrinivas addressed the gathering. He stated that Rotaract gives the opportunity to gain leadership qualities, execute projects, and serve the needy while enjoying friendships. He concluded his speech by wishing the newly appointed Board.
The speech was followed by an entertainment item which was performed by Rtr. Nelaka Fernando and Rtr. Minesh Dissanayake.
Afterwards, the Guest of Honor Rtn. Satyajit Seneviratne took the podium where he appreciated the invaluable services rendered by the young members of the club. He concluded his speech by wishing Rtr. Laila Zafir and her Board a successful Rotaract year.


Finally, the Chief Guest of the  evening, President of the Rotary Club of Colombo Midtown Rtn. PHF Selvarajah Maherakanth expressed his warm wishes to the new Board for the year 2017/18.
The floor was then open for felicitations and the installation was brought to a successful end with the vote of thanks delivered by the Secretary for the year 2017/18, followed by the National Anthem. Then the attendees gathered for refreshments and fellowship.
The Rotaract Club of University of Colombo, Faculty of Management and Finance conveys its best wishes to President Rtr. Laila Zafir and her Board for a successful year ahead.