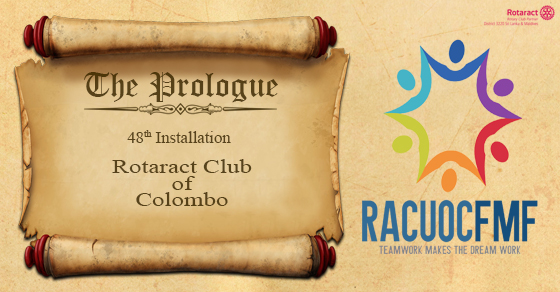 Posted at 03:36h in Installations, Others, Uncategorized by rcuocfmfadmin 0 Comments
The 48th installation ceremony of the Rotaract Club of Colombo was held on the 19th of August 2017, at Sri Lanka Institute of Tourism and Hotel Management. Rtr. President Akhila Wijethunga and Rtr. Kanishkaa Balakrishnan attended the event representing our club.
The proceedings of the evening began with the lighting of the oil lamp by the dignitaries, followed by the flag salutation, Rotaract invocation, four way test and the Rotaract song. The dignitaries were then invited to take their respective seats at the head table.
Outgoing Secretary Rtr. Ruki Abdulhussein warmly welcomed the audience. Following this, the Secretary’s report for the year 2016/17 was presented. Whilst completing a successful year under the theme, “Fostering Fellowship”, undertaking over 30 projects, the outgoing Secretary did not miss to share how enjoyable the experience was; growing with the club under the leadership of President Rtr. Inaya Bongso. It was mentioned how remarkable the past year had been with signature projects such as “Charity bus”, “Christmas with a difference” and “Escape to Paradise”.
The gathering was then addressed by the President for the year 2016/17 Rtr. Inaya Bongso. With the increased member base supporting the club’s initiatives in the past year, the President also highlighted how they were able to “reflect upon history”, when the club members were introduced to the Founder, Past President Rtn. PHF Ruzly Hussain. She also appreciated the hard work and support extended by the Board and the club members over the past year. Tokens of appreciation were given, recognizing the efforts of the Board during the past year.
Following this, the introduction and induction of the President for the year 2017/18 Rtr. Amir Abdulhussein was held. President 2017/18 Rtr. Amir Abdulhussein commenced his address thanking the outgoing President and her Board. The President highlighted the importance of understanding “Why we do; What we do, as Rotaractors”. He also explained how being Selfish (the need to develop oneself) and being Selfless (the need to help others) as Rotaractors has transpired into the theme for the year 2017/18 “Helping Yourself, Helping Others”.
The Board of Directors for the year 2017/18 was then introduced, which is as follows:
The audience was then entertained by the great singer and guitarist of ‘The Slipping Chairs’; Dylon Manuel.
Following this, was the address by the District Rotaract Representative, Rtr. PP. Anuradha Senanayake. Commending the clubs past activities, she also appreciated the club’s efforts to build friendship beyond borders through projects such as “Escape to paradise”. She also mentioned how the new theme for the term “Helping Yourself, Helping Others” defines the true spirit of Rotaract.
The District Rotaract Committee Chair Rtn. PP Bobby Srinivas then addressed the gathering. Speaking on the values of the club, he emphasized how the parent Rotary club acts as a great asset in terms of guidance & support to the club. He concluded by wishing the incoming President and the Board on their new responsibilities.

The Chief Guest of the evening Rtn. Thirunavukarasu Someswaran in his speech stressed on 3 key feelings experienced by being a part of Rotaract.
He congratulated the outgoing Board and wished the incoming Board for their new term.
The Guest of Honour, Chief Digital Officer of Hemas Holdings, Mr. Chandima Cooray was then welcomed to the podium. Being in the forefront of technology and innovation, Mr. Chandima Cooray clearly mapped out the interconnectedness between technology and human lives. He also explained the gathering on how young Rotaractors could drive, and be a part of a rapidly changing environment by adapting new technology.
Felicitation by the Guide Club Director Rtr. Hiras Hyder was then held. He extended his support towards the club’s initiatives and wished the President and the Board for the year 2017/18.
The event successfully concluded with the vote of thanks given by the Secretary for the year 2017/18 Rtr. Amie Peiris, which was followed by the National Anthem.
The Rotaract club of University of Colombo, Faculty of Management & Finance wishes Rtr. Amir Abdulhussein and his Board all the best for a successful year ahead.
Written By:
Clicks By: Theewra