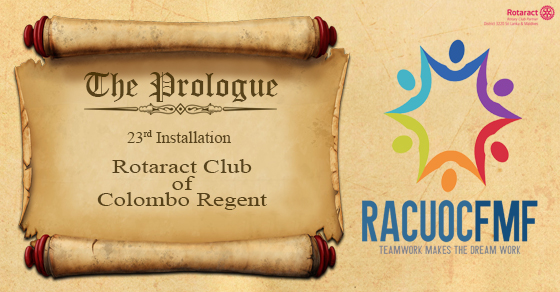 Posted at 13:57h in Installations, Others, Uncategorized by rcuocfmfadmin 0 Comments
The 23rd installation ceremony of the Rotaract club of Colombo Regent was held on the 26th of August 2017, at the Russian Cultural Centre. On behalf of our club, Rtr. Suvini Matharage and Rtr. Shanel Samaranayake attended the installation ceremony.
The event commenced with the arrival of the Chief Guest and other dignitaries followed by the lighting of the oil lamp, flag salutation, Rotaract invocation, four way test and the Rotaract song.
After welcoming the gathering, the Secretary’s report for the year 2016/17 was presented to the audience by the outgoing Secretary Rtr. Tahanie Yu. She highlighted the significant projects carried out by the club during the past year and took the audience on a wonderful journey along the memories of the club during the past Rotaract year.
Next, the outgoing President Rtr. Nilushika Wittachy addressed the gathering. In her speech she shared her wonderful experiences and memories as the President of the club and recognized the members for their commitment and dedication towards achieving the set targets for the year. She also stated that it would have been an impossible task if not for the amazing support given by the Board, all the members and also their family members.
Then came the most awaited event of the agenda where the outgoing President introduced and collared the President for the year 2017/18, Rtr. Tahanie Yu and handed over the duties and responsibilities of the club.
Then the President for the year 2017/18 Rtr. Tahanie Yu addressed the gathering. She started her speech by thanking the outgoing President, her club members and family and revealed how delighted she is for being selected as the President of the club. Throughout her speech, she expressed her aspiration to take the club to greater heights and requested the support of all the members in achieving this target.
Then she went on to introduce the Board members for the year 2017/18, which is as follows:
Next up on the agenda was the address by the District Rotract Representative, Rtr. PP. Anuradha Senanayake. She congratulated the newly appointed President and commended the Past President’s achievements and efforts in taking the club towards its pinnacle. She concluded her speech by saying “let your actions inspire people to do more, and reach to higher aims, by engaging in Rotaract and redefining friendship”.
Up next, the Youth Services Committee Chair Rtn. PHF. Satyajit Senavirathne addressed the gathering. He congratulated the outgoing President on a job well done and expressed his joy for the newly appointed President and wished her all the very best for a successful Rotaract year.
The District Rotaract Committee Chair Rtn. PP Bobby Sriniwas appreciated the leadership qualities of the Past President and congratulated on her achievements. He also congratulated Rtr. Tahanie Yu and appreciated her self – confidence and stated the importance of concentrating on enhancing the club image.
Subsequently, the Guest of Honor, Rtn. PHF. Kumudu Warnakulasooriya was invited to address the gathering. He stated that Rotaract is a good pathway for self -development and congratulated the outgoing Board on their achievements. He also conveyed his best wishes to the incoming President and the his Board for a successful year ahead and concluded his speech by highlighting the value of time which if used wisely can turn every moment into a special one.
Finally, the Chief Guest of the evening, President of the Rotary club of Colombo Rtn. Tiruwanakarusu Someswaran was invited to address the gathering. He congratulated the outgoing Board and promised to give his support for future endeavors of the club and wished all the very best for a wonderful year ahead.
The floor was then open for felicitations and the installation ceremony was brought into a successful end with the vote of thanks given by the Secretary, Rtr. Saarah Baawa, followed by the National Anthem. Then the attendees gathered for refreshments and fellowship.
The Rotaract club of University of Colombo, Faculty of Management and Finance conveys its warm wishes to the Rotaract club of Colombo Regent for a successful year ahead.
Written By: