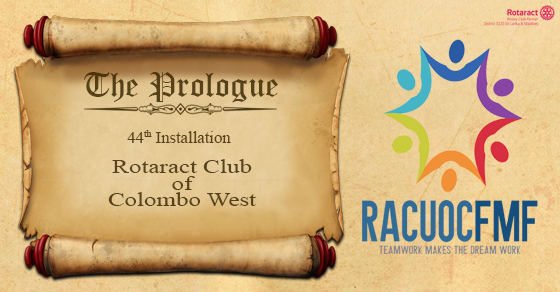 Posted at 16:12h in Installations, Others, Uncategorized by rcuocfmfadmin 0 Comments
The 44th Installation Ceremony of the Rotaract Club of Colombo West, which is the 3rd oldest Rotaract Club in Sri Lanka, was held on the 14th of July, at the Lakshman Kadirgaman Institute, from 6.00 pm onwards with the participation of many Rotaractors, Rotarians, Interactors and friends of Rotaract.
The event was graced by the presence of Chief Guest, President of the Rotary Club of Colombo West, Rtn. Chamath Kulasinghe, Guest of Honor, Youth Service Director 2016/17, Rtn. Yukthi Gunasekera, District Youth Services Chair, Rtn. PHF PP Satyajit Seneviratne, District Rotaract Representative, Rtr. PP Anuradha Senanyake, District Guide Club Director, Rtr. IPP Kavinda Bandulasena and other special invitees.
The guests and attendees were cordially welcomed following the lighting of the oil lamp, flag salutation, Rotaract invocation, the four-way test and the Rotaract song.
The Secretary’s report was read by Rtr. Senal Jayawardana where he highlighted the successful completion of 51 projects including their award-winning signature projects “West Aid”, “Fellowship 11” and “West Skate Day” and their achievements in member development, where they had been able to establish a member base of 51 members with 31 of them being active members. One of the other main highlights was their interaction with Rotaractors both locally and internationally which had resulted in a number of very successful exchange programs being conducted.
Then, PP. Rtr. Azeeza Najimudeen introduced the outgoing President Rtr. Sasmini Bandara, after which she addressed the gathering. In her speech, she mentioned that her soul objective was to bring the club to a level where it is memorable and had impacted a large number of people, after which she went on to thank each and every person, including her team and her parents who had helped her throughout this journey. She concluded her speech with a word of motivation for all who are involved in this movement.
“Being passionate about volunteering yourself to work for the better good is not a crime, society will tell you otherwise, it will question you and try to stop you, don’t let them stop you! Keep going, you will find your pot of gold at the end of the rainbow.”
Following the speech of the outgoing president, tokens of appreciation were awarded to the outgoing board, followed by the introduction of the incoming President Rtr. Nemitha Lakmin Weerasuriya by the IPP Rtr. Sasmini Bandara where it was revealed to us that Nemitha was no stranger to the movement being a past President of the Interact Club of Mahanama College and has proven his leadership and dedication towards the club by being the Finance Director.
In his speech, the incoming President Rtr. Nemitha Weerasuriya congratulated the past President and her Board on a job well done. He then went on to explain their core focus areas for the upcoming year;
• Humanity
• Public Relations and
• Youth Development
He then introduced his new Board which comprise of very diverse and dynamic set of individuals. The office bearers for the term 2017/18 are as follows,
The installation of the new Board was followed by DRR Rtr. PP. Anuradha Senanyake addressing the gathering where she further stressed on the District theme to “Engage Rotaract, Redefine Friendship” by showing the importance of fellowship between Rotarctors within the club and outside and also the fellowship with Rotarians. She advised the incoming President to make his own mark.
Then, Rtn. Yukthi Gunasekera, Youth Service Director 2016/17 who was also the Guest of Honor, delivered his speech under the topics of “Imagination and Failure” where he emphasized on the importance of Imagination followed by execution via delegation of authority taking the club’s liberator Rtr. PP Azeeza and her successor Rtr. IPP Sasmini as examples. He emphasized that when faced with failure, one should never give up but always be a part of something where you can succeed one day.
This was followed by the address of the Chief Guest Rtn. Chamath Kulasinghe who literary threw away his practiced speech and expressed his genuine excitement and surprise at the number of projects completed, the level of creativity when naming projects and just the fact that the Rotaract Club of Colombo West had a very good year.
The day’s proceedings came to an end with the felicitations, vote of thanks and the National Anthem being sung.
We would like to congratulate Rtr. IPP. Sasmini Bandara for showing the true Rotaract spirit and achieving all these incredible milestones and finally, we would like to wish Rtr. Nemitha Weerasuriya and his board for an even exceptional year ahead.