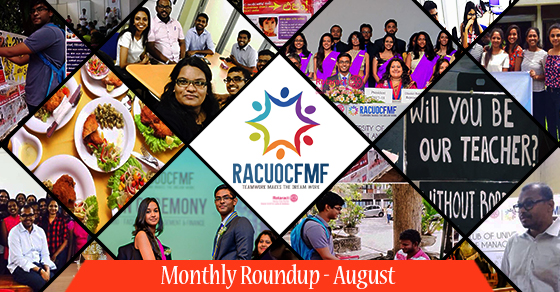 Posted at 14:02h in Round Ups, Uncategorized by rcuocfmfadmin 0 Comments
Here’s a look at how our month of August unfolded !
Club Service
The 7th Installation Ceremony of RACUOCFMF
The biggest highlight of the month; the 7th installation ceremony of our club was held on the 11th of August, at the University of Colombo, New Arts Theater from 6.30 pm onwards.
The event was graced by many significant individuals including the Chief Guest for the evening, Rtn. PHF Selvarajah Maherakanth, District Rotaract Committee Chair Rtn. PP Bobby Srinivas, Immediate Past District Governor Rtn. PHF Senaka Amarasinghe, Youth Adviser of Rotary Club of Midtown Rtn. Arshad Akbar and District Rotaract Representative Rtr. PP Anuradha Senanyake.
In the midst of more than 150 attendees, Rtr. Akhila Wijetunga was collared as the President of our club, followed by the induction of his Board of Directors for the year 2017/18.
With the direction of the project chairs; Joint Club Service Directors; Rtr. Kalani Perera and Rtr. Akshana Perera, and the hard work of the project committee, we were able to elevate the installation to perfection which grabbed everyone’s attention.
We take this opportunity to thank each and every individual who supported and guided us to make our installation ceremony a success and to all those who were present at the event to wish us for the new Rotaract year. Read more
Professional Development
Leader in You
‘Leader in You’ was our first Professional Development project for the year 2017/18, chaired by our Professional Development Directors, Rtr. Lakna Rajapaksha and Rtr. Dinithi Cooray which was held on the 16th August from 6.00 pm to 7.30 pm at the faculty premises with the participation of more than 30 club members. The workshop was conducted by Mr. Rohan Jayaweera, the Chief Operating Officer at Antyra Solutions and was carried out with the motive of uplifting the leadership and people management skills of our members. This workshop created a great platform for our members to identify their true potential to succeed in life.Read more
Community Service
Let’s Start with Us – Phase 1
The first phase of ‘Let’s start with us’ campaign was held on the 7th of August at the faculty premises with the aim of raising awareness on dengue prevention, pledging for a dengue free tomorrow. With the patronage of Rotaract District 3220 we were able to distribute leaflets and paste posters in order to educate University students on the measures that they can take to eradicate dengue. 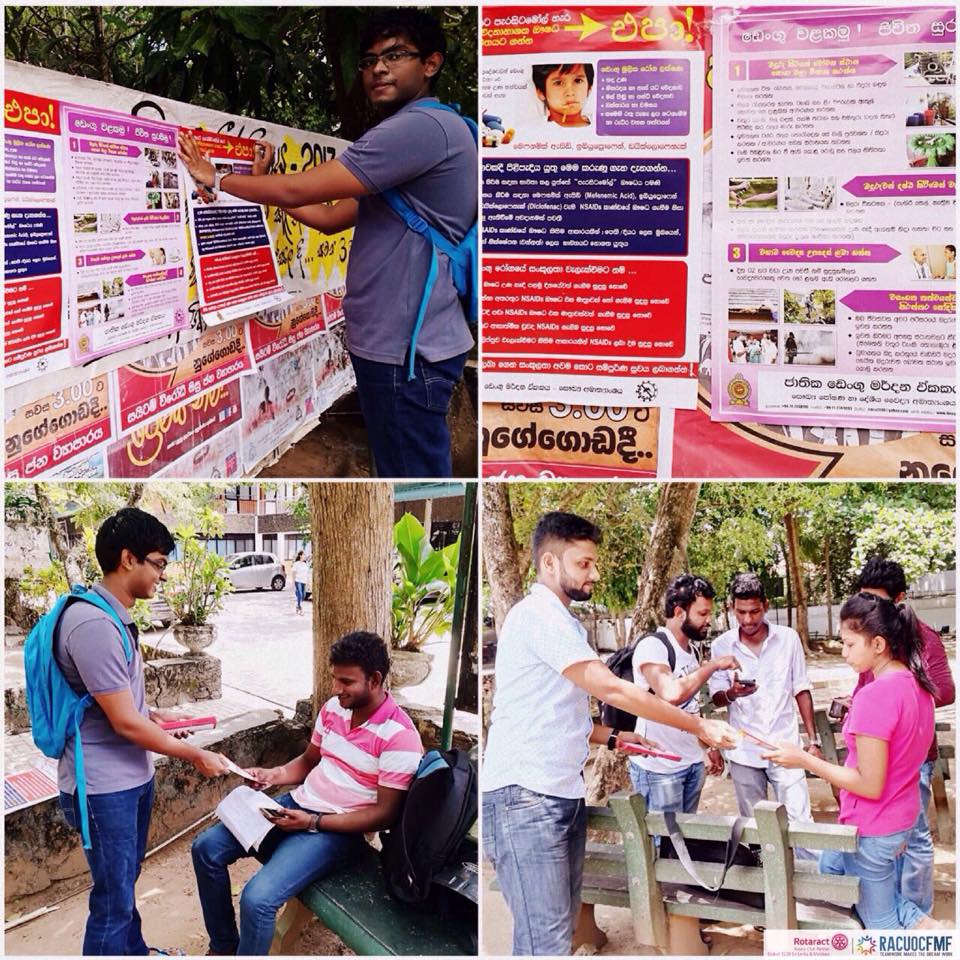 Public Relations and IT
Know Your Board
Chaired by our Public Relations Co – Director Rtr. Ramith Kalana, ‘Know Your Board’, was a public relations campaign carried out on Facebook to introduce our newly appointed Board of Directors for the year 2017/18. This year the project was carried out under ‘Game of Thrones’ theme assigning each and every member a GOT character which suits them the most. The unique and amusing character outlines posted on Facebook revealed the true qualities of our amazing Board of Directors which gave everyone the opportunity to get to know our Board in a unique manner.
Blog
Our blog reached another important milestone during the month of August by publishing its 200th blog article. Our blog currently has surpassed 120,000 blog views with 212 articles being published since its launch in July 2015. 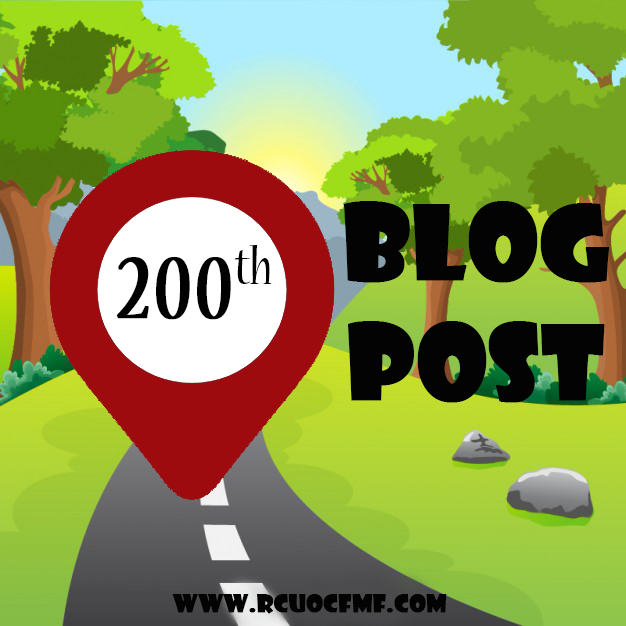 During the month, our blog also geared up to improve its space by starting a new blog column – “The Viewpoint” which focuses on the prevailing social issues and how Rotaract can help solve them, making it a platform to carry out social awareness and change campaigns. The first article was published on the theme “Empower her – not because she’s a woman but because she has potential” highlighting how Rotaract can assist in empowering women in Sri Lanka. Read more
External Events
August was an action packed month for not only our club, but also for most of the other clubs in the District. RACUOCFMFers took part in all the installation ceremonies held during the month and wish to extend warm wishes and best of luck to all the Presidents and their Board of Directors for a flourishing year ahead.
We were also pleased to be a part of the following events;
Joint Meeting and Kitchen Challenge 2.0
The first joint meeting for the year was held on the 12th of August at the Paradise Beach Hotel, Negambo with the participation of six Rotaract clubs namely; Rotaract Club of Negombo, Rotaract Club of Wattala, Rotaract Club of University of Colombo Faculty of Management and Finance, Rotaract Club of CFPS Law School, Rotaract Club of Kelaniya and Rotaract Club of Edulink International Campus. The Meeting was hosted by the Rotaract club of Negambo.
The highlight of the day was the “Kitchen Challenge 2.0”, a cooking challenge organized by the Rotaract Club of Negambo. It was indeed a great initiative, as at the end everyone was delighted that they were part of the Joint Meeting and Kitchen Challenge 2.0 and were looking forward to the next joint meeting which will be held in the following quarter. Read more
Draw 4
Uno™ is a popular card game played with a special deck of cards. RACUOCFMFers got the opportunity to spend a fun filled evening over a deck of UNO cards by taking part in ‘Draw 4’, organized by the Rotaract Club of NSBM which was held on the 31st of August at the Royal Skills Centre. Kudos to RACNSBM for carrying out such a marvellous project. 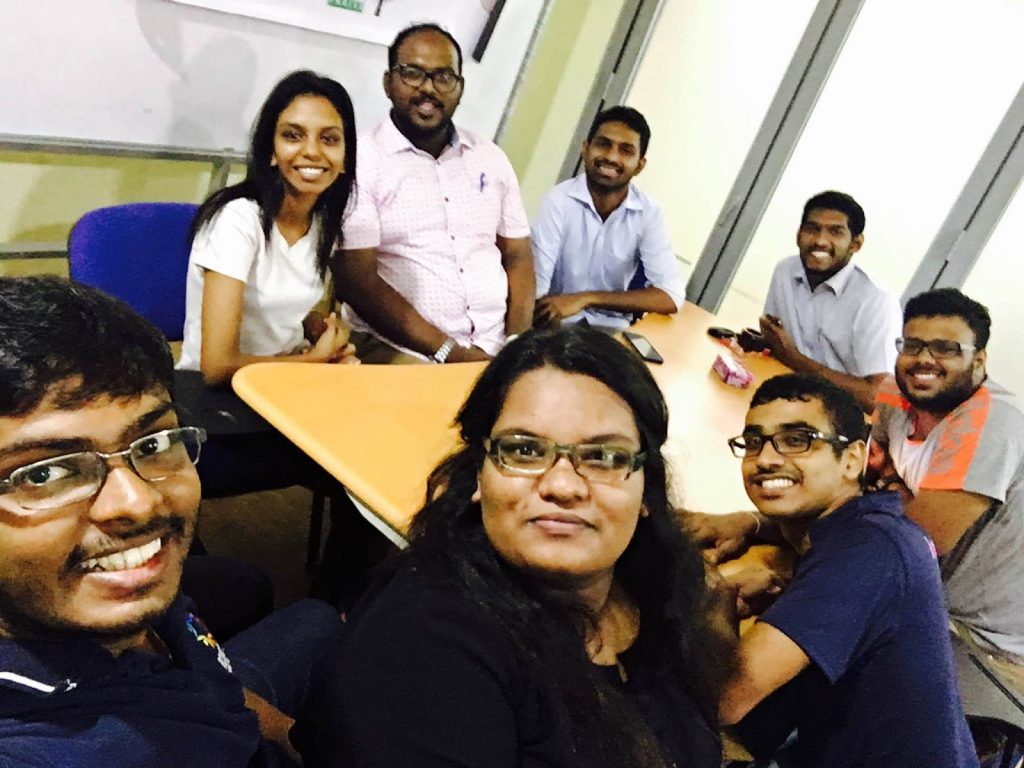 The Colombo Classroom – Edition 2
‘The Colombo Classroom’ second edition was an amazing project organized by the Rotaract Club of Colombo Mid Town hand in hand with ‘Without Borders – Sri Lanka’ which was held on the 26th of August at the Lanka Comic Con.
It was an event organised to promote volunteerism and innovative thinking to reveal the hidden spark within ourselves to inspire and transform others. Many Rotaractors from various clubs including our own, volunteered to share their knowledge with the kids which gave the little ones an enjoyable session in their unique Colombo Classroom.