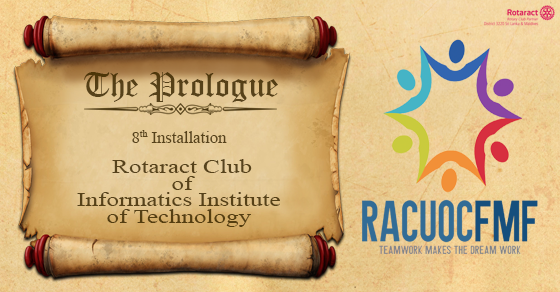 Posted at 14:41h in Installations, Others, Uncategorized by rcuocfmfadmin 0 Comments

The 8th installation ceremony of the Rotaract Club of Informatics Institute of Technology for the year 2017/18, was held on the 28th of July 2017, from 6.30 pm onwards at the Informatics Institute of Technology. The registrations started at 6 pm and our club was represented by Rtr. Akhila Wijethunga, Rtr. Dushmantha Abeywickrama and Rtr. Pulara De Silva.


The ceremony commenced with the arrival of the Guest of Honor, Mrs. Antoniette Hettiarachchi, lecturer in charge of the Rotaract Club of IIT and Several other dignitaries including, Chief Guest Mrs. Kumuduni Sarathchandra, the head of Business School of IIT, District Rotaract Representative Rtr. PP Anuradha Senanayake and District Rotaract Committee Chair Rtn. Bobby Shrinivas.


After the lighting of the oil lamp by the dignitaries, the installation was called to order, followed by the Flag Salutation, Rotaract Invocation, the Four-Way Test and the Rotaract song. The gathering was then warmly welcomed by the Project Co-Chairperson, Rtr. Dilara Mannapperuma.


Next on agenda was the Secretary’s Report for the year 2016/17, by the acting Secretary Rtr. Thariq Hamad. In which he mentioned that a total of 40 projects were completed during the year including “Sally’s Manor” and “HotDog Showdown 2017”. This was followed by a short video which highlighted the achievements, events and the projects undertaken by the club during the past year.

The audience was then addressed by the President for the year 2016/17 Rtr. Rumesh Thiruchchelvam. He began his speech by thanking the audience, stating that it’s his unique way of starting meetings. Despite of the tough journey and the life changing moments he had to face, he said and I quote “because of Rotaract I am the person who I am today”. Then he went on to thank each and everyone, including his fellow board members and club members for their continuous support and commitment given throughout the year. He concluded his speech by inviting everyone to stay with Rotaract and to be the change they want to see in this world,


Immediate Past President Rtr. Rumesh Thiruchchelvam then distributed tokens of appreciation to the project chairs for their hard work and his Board of Directors, who led the club during the term 2016/17. Then a new award, “Award of ABCD” or “Above and Beyond the Call at Duty” was presented to Rtr. PP Shenal Mendis and Rtr. PP Punith Gunasekara.


The gathering was then addressed by the incoming President Rtr. Thareef Bin Ubaid and he acknowledged each and every individual who supported him throughout his journey. He stated that they will be bringing back the projects that were discontinued and the focus will be on the impact of the projects rather than the scale of the projects. Further, he revealed the theme for the new term; “Friendship serving humanity”. The “official club handshake” was then introduced and demonstrated.


Next on the agenda was the address by District Rotaract Representative, Rtr. PP Anuradha Senanayake. She recognized the importance of clubs and their membership to the District. She also congratulated the Rotaract club of IIT for all the amazing work they have done through their projects such as “HotDog Showdown 2017”, “Sally’s Manor” and “Voice for the voiceless”. Then, she congratulated the Immediate Past President Rtr. Rumesh Thiruchchelvam and wished the incoming President Rtr. Thareef Bin Ubaid and his Board a successful year ahead. She extended her gratitude for the management and the lecturers of IIT, Parent Rotary club, the Rotary Club of Nugegoda and the parents of Rotaractors for their immense support. She concluded her speech stating “Let’s engage Rotaract, redefine friendship to serve humanity”.


District Rotaract Committee Chair, Rtn. PP. Bobby Shrinivas then addressed the gathering. He emphasized the importance of enhancing the image of the club in order to attract new members, to do projects easily and to raise funds. He congratulated the Immediate Past President and his Board and wished all the very best for the incoming President Rtr. Thareef Bin Ubaid and his Board. He requested the Parent Club, Rotary Club of Nugegoda to extend their maximum support towards the Rotaract Club of IIT and to guide them to do their projects successfully. He concluded his speech stating that discipline and consistency is the most important two key factors in achieving goals.


The evenings’ proceedings gathered momentum with an entertainment segment by Shavindya Kariyawasam and Vihanga Bandara. Thereafter Rtr. Thejani Wijewardena introduced the Chief Guest, Mrs. Kumuduni Sarathchandra, to the audience. She admired the team work and organizational skills of the Rotaractors demonstrated at their signature project “HotDog Showdown 2017”. Finally, she congratulated the outgoing President and his board on their achievements and wished the new board for an amazing year ahead.


Next, the dignitaries were awarded tokens of appreciation which was followed by the felicitations.


To mark the end of the Installation Ceremony, the vote of thanks was delivered by the Secretary for the year 2017/18 Rtr. Thareeq Hamad, which was followed by the National Anthem. Then the Ceremony was terminated and the attendees gathered for refreshments and fellowship.


The Rotaract Club of University of Colombo, Faculty of Management & Finance, extends best wishes to Rtr. Thareef Bin Ubaid and his Board of Directors for a successful and fantastic year ahead.