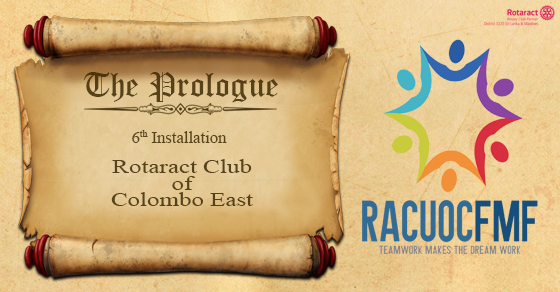 Posted at 05:30h in Installations, Others, Uncategorized by rcuocfmfadmin 0 Comments
The 6th installation ceremony of President Rtr. Adrian Jesudasan and his Board of Directors for the year 2017/18 was held on the 27th of August 2017, at the Olympic House Auditorium, Colombo 07. Representing our club, Rtr. Shenali Fernando and Rtr. Rushdan Refai attended the event.
The ceremony commenced with the arrival of the distinguished guests for the evening; Chief Guest Rtn. PHF Indrajith Fernando, Guest of Honour Rtn. PP Bobby Srinivas and District Rotaract Representative Rtr. PP Anuradha Senanayake.
Then, the house was called to order followed by the lighting of the traditional oil lamp, flag salutation, Rotaract invocation, four – way test and the Rotaract song.
The welcome address was followed by the presentation of the Secretary’s Report for the year 2016/17 by the outgoing Secretary, in which she expressed her pleasure on successful completion of the term and gave a special recognition to their signature projects. She finally expressed her pride on the achievements during the year, which included winning a number of District awards.
Next on stage was the outgoing President Rtr.  Pramod Fernando, who expressed his gratitude to all those who supported him in taking the club to greater heights. He then extended his wishes to the incoming President and his Board.
After a small introduction to the President for the year 2017/18, outgoing President Rtr. Pramod Fernando collared the incoming President Rtr. Adrian Jesudasan, and officially handed over the duties and responsibilities of the club.
Then, the newly appointed President Rtr. Adrian Jesudasan took the stage and promised to work towards the betterment of the club. He then thanked his parents, friends and fellow Rotaractors for the unwavering support they have given throughout his Rotaract journey. Then, he introduced his Board of Directors for the term 2017/18, which is as follows;
Next on the agenda was the address by the District Rotaract Representative Rtr. PP Anuradha Senanayake, where she congratulated the newly appointed Board and appreciated the job well done of the outgoing Board. She also commended the work done by the club over the past years and highlighted that the club had been known for taking risks and learning along the way. She urged Rotaractors to come out of their comfort zones to do things which no one imagines to do for the betterment of the community.
Next was the address by the Guest of Honour Rtn. PP Bobby Srinivas who congratulated the newly appointed President and his Board.  Then the Chief Guest for the evening, Rtn. PHF Indrajith Fernando addressed the gathering. He also congratulated the outgoing Board and wished the newly appointed President and his Board for a successful year ahead.
Afterwards, the audience was energized by a song performed by Rtr. Moksha & Rtr. Sanjaya.
Finally, the stage was open for felicitations followed by an invitation for fellowship and refreshments.
The Rotaract Club of University of Colombo, Faculty of Management  & Finance would like to extend warm greetings and well wishes to Rtr. Adrian Jesudasan and his Board of Directors for an amazing year ahead.
Written By: