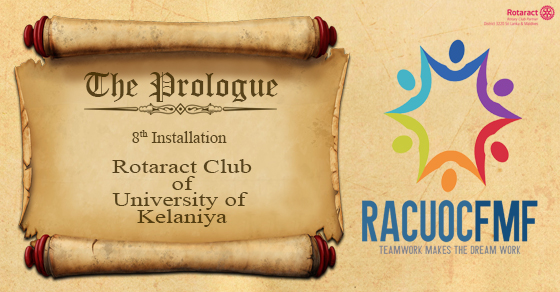 Posted at 03:16h in Installations, Others, Uncategorized by rcuocfmfadmin 0 Comments
Becoming one of the emerging clubs in the year 2016/17, the Rotaract Club of University of Kelaniya proudly held its 8th Installation Ceremony for the year 2017/18 on the 24th of September, at the Olympic House Auditorium, from 5.30 pm onwards with the participation of many Rotaractors, Rotarians, Interactors and friends of Rotaract. Rtr. Udanee Silva and Rtr. Isuri Alahakoon attended the event on behalf of our club.
The proceedings of the ceremony began with the lighting of the oil lamp followed by the, Flag Salutation, Rotaract Invocation, Four Way Test and the Rotaract Song. The Chief Guest for the evening was Rtn. IPP. Jegatheesan Pirrasanth, Youth Service Advisor of Rotary Club of Colombo Uptown and other dignitaries were District Rotaract Representative, Rtr. PP Anuradha Senanayake, District Rotaract Committee Chair, Rtn. Bobby Srinivas, Immediate District Rotaract Representative Rtr. PP. Mohamed Husni and the President of the Rotary Club of Colombo Uptown, Rtn. Sulochana Vanniasinkam.
Rtr. Iruma Manavi Ratnayake warmly welcomed everyone to the 8th Installation Ceremony by delivering the welcome address. Rtr. Darsha Hewapanna and Rtr. Yasasi Bandaranayake delivered the Secretaries’ Report for the year 2016/17. The achievements of the club for the year 2016/17 were presented through a short video clip unfolding the past memories. Even though the outgoing President Rtr. Harindu Darshana Abeysinghe was not present at the Installation Ceremony due to an unavoidable reason, he managed to express his thoughts through a recording which was played during the ceremony. He thanked and appreciated the contribution of fellow members and his Board members who were the key driving forces behind his success in Rotaract as well as during his tenure as the President. His speech was concluded after extending warm wishes for the incoming Board members.
After presenting tokens of appreciation to the outgoing Board members, Rtr. Treshan De Zoysa gave an introduction to the incoming President Rtr. Shivantha Dawson. Next, the most awaited moment arrived which was the collaring of the newly appointed President for the term 2017/18, Rtr. Shivantha Dawson and the club’s duties and responsibilities were officially handed over to him.
Afterwards, the newly appointed President Rtr. Shivantha Dawson took the opportunity to express his thoughts, vision and future plans. He highlighted the importance of maintaining the effective reporting and feedback system, sustainable projects, innovativeness and building international relationship with other Rotaract clubs. Next in line was the induction of the Board of Directors for the year 2017/18.
Board of Directors for the term 2017/18 is as follows;
Next up on agenda was the address by the Chief Guest for the evening, Rtn. IPP. Jegatheesan Pirrasanth, Youth Service Advisor of Rotary Club of Colombo Uptown. Firstly he admired the amazing rapid growth of the club and commended the outgoing President Rtr. Harindu Darshana Abeysinghe and his team on a job well done. Further he shared his experiences in his Rotaract life and explained how to grab opportunities as Rotaractors, importance of maintaining the long term relationships with Rotarians and Rotaractors and concluded his speech after wishing the newly appointed Board for an amazing year ahead.
Then, the gathering was addressed by DRR. Rtr. PP Anuradha Senanayake. She extended her warm wishes for the newly appointed Board members and highlighted that being a Rotaractor does not mean only involving in social service or community service, it is about developing ourselves, creating networks, making positive changes and redefining friendship while helping out the community. She concluded her speech explaining the importance of maintaining the relationship among Rotary family and Rotaractors.
Next, the District Rotaract Committee Chair Rtn. Bobby Srinivas addressed the gathering. He began his speech, sharing a story of a remarkable person Mr. Sundar Pichai who is an Indian American Business Executive. Through that story he signified that “Rather than reacting to something, the most important thing is responding”. Furthermore he revealed that discipline and commitment are the most important things needed to achieve a goal. He finished his speech by signifying that, rather than giving advices to a leader the better thing to do is supporting to the leader’s vision by giving members’ personal and individual support.
Finally, tokens of appreciation were distributed to the dignitaries at the head table and the stage was open for felicitations. The Secretary for the term 2017/18 Rtr. Sherami Ranasinghe then delivered the vote of thanks to mark the end of the installation ceremony followed by the National Anthem.
The Rotaract Club of University of Colombo, Faculty of Management and Finance wishes President Rtr. Shivantha Dawson and his Board a successful year ahead.
Written By:
Click By: VEVRA