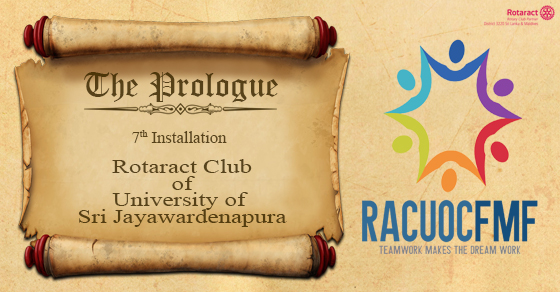 Posted at 05:31h in Installations, Others, Uncategorized by rcuocfmfadmin 0 Comments
The 7th Installation Ceremony to induct President Rtr. Samudya Amarasinghe and his Board of Directors for the year 2017/18, was held on the 24th of August 2017, at the Science Auditorium of University of Sri Jayawardenapura. Rtr. President Akhila Wijethunga, Rtr. Harindi Jayasuriya, Rtr. Akshana Perera, Rtr. Thisal Liyanage and Rtr. Krishmal Fernando attended the event representing our club.
With the arrival of the Chief Guest and other dignitaries, the house was called to order. After the flag salutation, four way test, Rotaract invocation and the Rotaract song, the gathering was welcomed by the project chairperson Rtr. Dinuka Senevirathne.
Then, the Secretary’s report was presented by the outgoing Secretary Rtr. Dinika Kumarage. She was delighted to mention their success in carrying out projects during the past year while facing many obstacles thrown in their path. Some of the projects carried out by the club during the past year include;
The outgoing President Rtr. Osanda Wijesudara was pleased to speak about his experience as the President of the club for the year 2016/17. Although it was a tough time for the club, he mentioned how they worked hard to increase the membership from thirty-five to eighty and from eighty to the present number which is three-hundred. He made it an opportunity to thank a few individuals who contributed immensely and helped him to fulfill his duties as the President.
The introduction of the incoming President was given by Rtr. Piyumi Rajapakshe. Following this the incoming President Rtr. Samudya Amarasinghe was collared. Rtr. Samudya Amarasinghe mentioned in his speech that he considers his loving parents, outgoing President Rtr. Osanda Wijesundara and the Vice Chancellor of University of Sri Jayawardenapura Prof. Sampath Amarathunga, as his pillars of strength.
He then went on to introduce the members of his Board. The newly appointed Board of the club consists of the following Rotaractors;
The gathering was then addressed by the District Rotaract Representative Rtr. PP Anuradha Senanayake. She recognized the outgoing President Rtr. Osanda Wijesundara for having completed a wonderful year. She also mentioned that the club is one of the rare and strong clubs with more than 250 membership base. The DRR further appreciated and highlighted the incredible projects done by the club such as “Butterfly Effect”.

The Chief Guest for the evening, Professor Sampath Amarathunge, who is the Vice Chancellor of the University of Sri Jayawardenapura, was proud to talk about the club and what the club has done in the past few years. He recalled how the club was initially started and he promised to give his fullest support for their future endeavours.

Following the speech of the Chief Guest, the District Rotaract Committee Chair Rtn. PP Bobby Shrinivas recognized the outgoing President Rtr. Osanda Wijesundara for the job well done and reminded the gathering “if something is not hard, it will never be something great”.

Finally, the Guest of Honor for the evening Rtn. PHF Warren Solamanz, who is the President of the Rotary Club of Battaramulla addressed the gathering. He praised the fact that how the club has increased their membership base and he also mentioned that the human resource is the biggest resource a club can use to do good to the society. “The stronger the bonds you make, the better and the bigger you can achieve” was his last message to all the Rotaractors.

The floor was then open for felicitations, followed by the vote of thanks and the National Anthem which successfully concluded the 7th installation ceremony of the club.

The Rotaract Club of University of Colombo Faculty of Management & Finance wishes all the very best to Rtr. Samudya Amarasinghe and his Board for a successful year ahead.