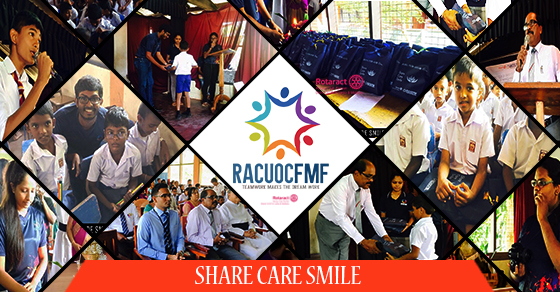 Posted at 05:41h in Avenues, International Service, Quality Education, SDGs, Uncategorized by rcuocfmfadmin 0 Comments
“Share from yours, care for others, smile together” was the motto throughout this project which was initiated by the Rotaract club of Hyderbad Himayath Nagar. Our club executed this as a joint project where we were told to collect a stationary item from any student and donate them to students who are in need of them. On 21st September 2017, we carried out this project at Vidyathilaka Vidyalaya, Colombo 06, which not only gave us a great experience but an opportunity to take a glimpse into the small world of those students.
We approached Vidyathilaka Vidyalaya, which consist of 64 students both in primary and upper school, with the aim of providing them at least one stationary item but ended up giving a gift pack altogether due to the generosity of those who made a lot of efforts in giving their donations. Principal of the school, Mr. M. K. Dayawansha was very supportive and guided us throughout our project and was very generous of organizing a small ceremony on behalf of the students as an appreciation for the support we have given to them.
We all reached Vidyathilaka Vidyalaya at around 8.30 a.m. followed by small schoolboys and girls in their white uniforms asking “Are those gifts for us?” Their nonstop smiles and friendly conversations made us feel like we were back in school. While some of us engaged in arranging gifts and welcoming guests, some of our club members started conversations with students which included questions like “What is your ambition?”, “Whom do you love the most among your parents?”
By 9 a.m. all was set to start the event and it started off by lighting the oil lamp by the Chief Guest, Western Province General Director of Informal Education and Director of Pre-School Mr. Mahinda Kodithuwakku, President of our club Rtr. Akhila Wijetunga and other dignitaries followed by the religious observations. At the outset, everyone was welcomed by the school Principal backed by the speech of our President. Then the gathering was fascinated by a beautiful song sung by a grade 10 student. Next, was a charming drama performed by the upper school students under the theme “Benefits of Education”. Next, the Chief Guest was called upon to address the gathering, where he emphasized on the privilege of being able to get free education and how education can change ones’ life.
With those things in mind, next was the highlight of the day, the distribution of gift packs. All students one by one climbed up the steps to get onto the stage to receive their gift pack from one of the many great personalities gathered there. Some got their blessings by worshipping while others got their blessings through a tap on their head or shoulder. After receiving the gifts it was very satisfying to see how they unwrapped their gift packs with a smile on their faces and compared what they had inside their gift pack with that of their friends.
When it was nearly the end of the event, a student from grade 11 delivered the thank you speech and the ceremony was concluded by singing the National Anthem. Afterwards, there were some photo clicking moments with the students and the staff of the school with the motive of collecting memories.
It was very courteous of the school staff to treat us with refreshments which led to a friendly conversation about our University and our club. Though it was hard, we finally bid off our good byes to the students of Vidyathilaka Vidyalaya hoping that we added at least a slight difference to their small world.
Written By: