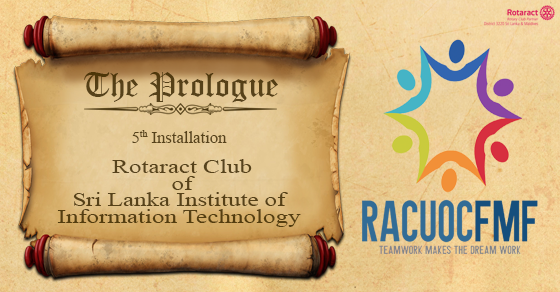 Posted at 14:25h in Installations, Others, Uncategorized by rcuocfmfadmin 0 Comments


The welcome speech was made by Project co-chairperson Rtr. Sethil Muhandiram to welcome all the special guests, district committee, fellow rotaractors, parents and well-wishers for the evening.


Next the secretary’s report for the year 2016/17 was conveyed through which the most significant milestones of the club was highlighted. Their hard work and dedication had resulted in 33 projects being successfully completed which had rendered great service to the society at large.


Following the secretary’s report for the year 2016/17 was the speech of the immediate past President Rtr. Kavinda Bandulasena. He thanked all the members and the outgoing board for the utmost passion and commitment shown throughout the year in uplifting the club to a higher level. He also mentioned his gratefulness for the support of friends and family, to their Staff advisor Mr.Indraka Udayakumara, partners in service, supportive and constantly guiding Rotarians from the Rotary Club of Battaramulla. He then wished best of luck to the newly appointed President and his board for an amazing year ahead. He then showed his gratitude for the outgoing board for their tremendous support by giving away tokens of appreciation.


Afterwards, the most awaited moment of the evening arrived which was the collaring of the newly appointed president for the RACSLIIT for the year 2017/18 where IPP. Rtr. Kavinda Bandulasena officially handed over the club’s responsibilities to Rtr. Vinura Ganegoda.


Rtr. Vinura Ganegoda made a promising speech about his vision for the club for the upcoming year and thanked everyone who helped him to reach where he is now with a few humble yet with heart felt gratitude. Afterwards he proudly introduced the newly appointed board of directors for upcoming year.

Next the District Rotaract Representative PP. Rtr. Anuradha Senanayake addressed the gathering in which she highlighted their inspirational projects such as Team Alpha, Care 2 Share and Bollywood Night through which the RACSLIIT showed creativity, and passion towards community. She congratulated the immediate past president for the amazing job done and wished all the best of luck for the newly appointed president and his team for a more colourful year ahead.


Afterwards the chief guest Mr. Panduka Mallawaarachchi, addressed the gathering, where he extended his and his staff’s support to the newly appointed president and also enlightened the gathering on the importance of students engaging in these club related activities which broadens the wisdom horizon.


Then the Youth Service Chairperson of Rotary club of Battaramulla addressed the gathering through which she expressed her satisfaction over the club’s conduct and ensured their full support for the year ahead.


Then the floor was opened for felicitations. The ceremony was then concluded with the vote of thanks followed by the National Anthem and the installation ceremony was adjured for refreshments and fellowship. 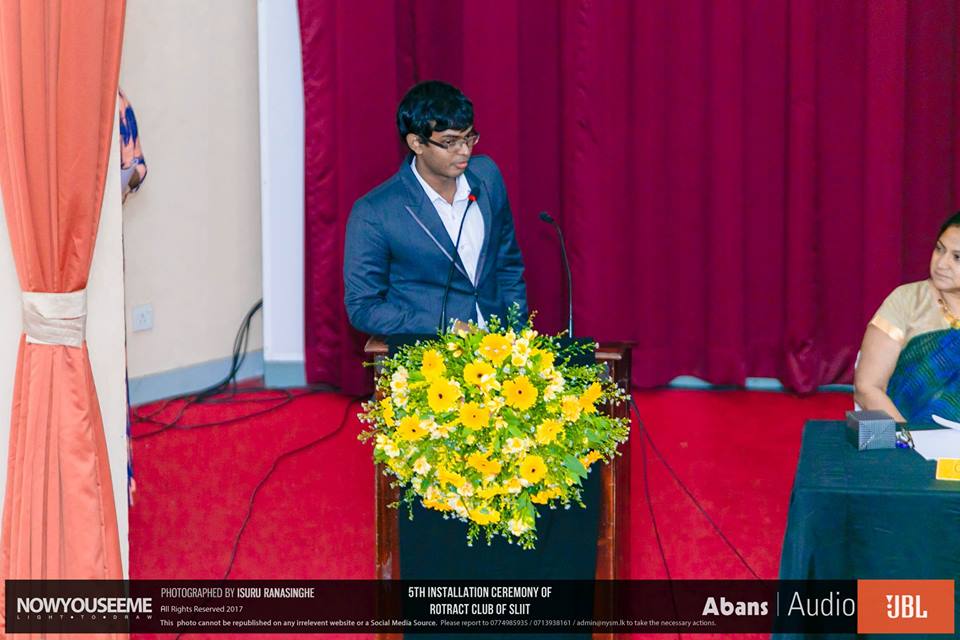 Rotaract Club of University of Colombo Faculty of Management and Finance wishes best of luck to Rtr. Vinura Ganegoda and his board of directors for an amazing year ahead.