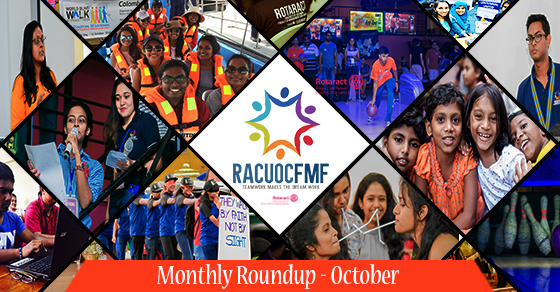 Posted at 14:28h in Round Ups, Uncategorized by rcuocfmfadmin 0 Comments
Here’s a look at how the month of October was for our club!
Awards and Recognition

President of our club, Rtr. Akhila Wijethunga was selected as the President of the Month for October, by the Rotaract District 3220. This is a very deserving award for our President for his unprecedented hard work and commitment towards Rotaract movement and towards driving the club to new standards. 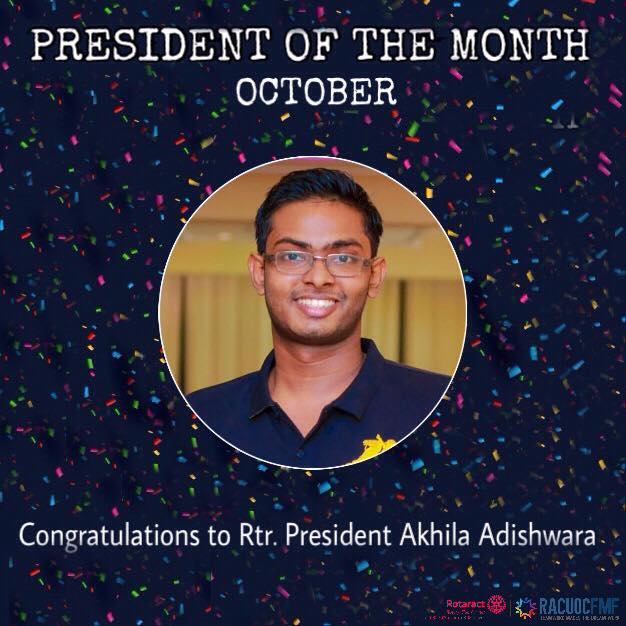 Community Service
Blind Walk’17
This is a project that holds a special place in all our hearts. Organized as a part of the international celebrations for the “World Sight Day”, we participated in the “Colombo Blind Walk”, the Sri Lankan leg of the World Blind Walk, initiated and coordinated by Project Vision, Bangalore, India on the 12th of October 2017.
Rotary Club of Colombo Mid Town, Rotaract Club of Achievers Lanka Business School, Rotaract Club of Australian College of Business and Technology, Rotaract Club of Colombo Midtown and our very own club partnered together to organize this project with the objective of raising awareness of the issues faced by the visually impaired and encouraging eye donation as a means of sharing the gift of vision.
At the end of the Blind Walk, an entertainment show took place where a combination of Sinhala, English, Tamil and Hindi songs were performed by the participants of ‘Friends in Action’.
With the help of Sri Lanka Eye Donation Society, the necessary documentation for pledging eyes were made available to all Rotaractors, Rotarians and the general public during the event and we are glad that the event was a success, as we were able to get over 200 eye pledges signed by the end of the event.
(Image source : FMF Media)
Share the Joy
“Share the Joy” was a joint project carried out with the Rotaract Club of Alumni of University of Moratuwa, which was held on the 22nd of October at the Vajira Child Development Centre, Pitakotte. The main aim of the project was to share love, joy and happiness with the little ones who needed them the most. The few hours we spent chatting, singing and playing with the little ones surely added life long memories to our lives.Read More 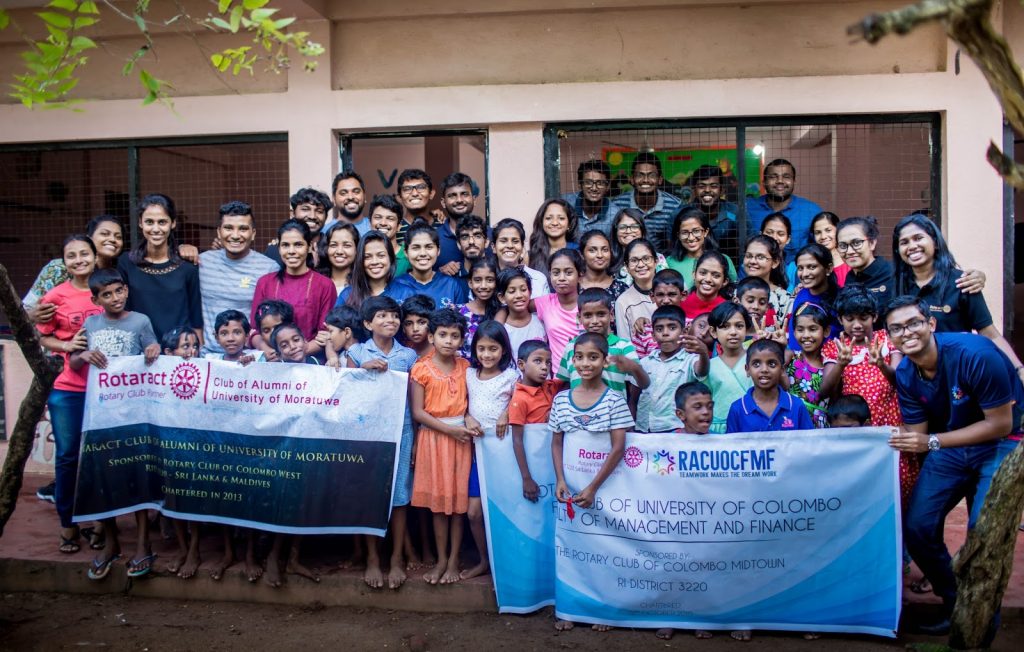 Finance
KingSpin 2.0
“King Spin 2.0”, the largest bowling tournament of the year, was held on the 15th of October from 2.00 pm onwards at Excel World, Colombo. This project gave an incredible bowling experience to all the participants and made the day a fun filled memory in their minds.
The competition was open for both Rotary Family and General Public. Even though the competition was fierce, the participants were able to relish the event to its fullest while enjoying the refreshments, DJ music, and much more.
A special appreciation goes to our project chairs Rtr. Uvini Liyanage and Rtr. Limashi Kosgoda, for making this project a success.Read More
(Image source : FMF Media)
Membership Development
Orientation Day
The Orientation Day for the first year students of our faculty was held on the 18th of October at Winner Academy, with the participation of more than 50 freshers who were eager to join our club.
The programme consisted of three sessions. First, was the general meeting for the month to introduce the formalities to the newbies. Then, an introduction to the Rotaract movement,  was conducted by our District Rotaract Representative Rtr. PP Anuradha Senanayake and District Editor Rtr. Pramodha Weerasekara.
Next, the spirit of the event was uplifted with the team building games which were organized to create a bond between the new-comers and the members of the club.
The orientation was indeed a day filled with knowledge, fun and great memories to cherish and we welcome our new members to the RACUOCFMF family with open arms!
(Image source : FMF Media)
Public Relations and IT
Photoshop Workshop
“Photoshop Workshop” was the first project organized by Public Relations and IT Avenue of our club which was held on the 25th of October at the Faculty premises. It was conducted by our very own President Rtr. Akhila Wijethunga and was organized with the intention of enhancing the Photoshop skills of our members.
Club Service
Board Trip
The annual Board trip of our club was held on the 28th of October. It was a fun filled trip which saw the participation of 19 Board members of the club. The trip provided a great opportunity for the Board members to bond together and to create long lasting memories.
Kudos to the efforts of our Club Service Directors and Project Chairperson Rtr. Shenali Fernando, for making the Board trip one of the most memorable experiences to all the Board members who participated.
Blog
During the month of October, the blog surpassed the 140,000 view count and as of today 230 articles have been published. We would like to extend our gratitude to all our readers for their support and enthusiasm and especially to our amazing club members without whom the blog would not have been where it stands today.
External Events
October was an exciting month not only for our club, but for other clubs as well. RACUOCFMFers took pleasure in attending many outstanding events organized during the month, including all the installation ceremonies.
Here are some of the projects we attended during the month;
The Puzzle Twist 2017
“The Puzzle Twist 2017” organized by the Rotaract Club of Centennial United was an overwhelming, brain booming and fun jigsaw puzzle competition which was held on the 28th of October at the Royal College Skills Center, where approximately 8 teams, each with four members, struggled to figure out east or west of a 1000 pieces of a jigsaw puzzle within two hours and fifteen minutes. We are proud that RACUOCFMFers emerged champions. Cheers to Rotaract club of Centennial United for giving us an opportunity to improve our concentration level.
Joint Meeting
The joint general meeting conducted along with the Rotaract Club of Alumni of University of Moratuwa, was held on the 22nd of October, at the Royal Skills Center. Meeting started off with project updates, and went on to serious discussions with fun icebreakers in between. It was a great opportunity to redefine friendships and engage in the true spirit of Rotaract, which was truly one of a kind.