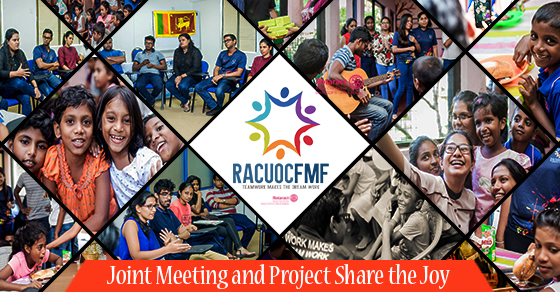 Posted at 12:55h in Avenues, Community Service, Uncategorized by rcuocfmfadmin 0 Comments
The Joint meeting and project “Share the Joy” was successfully held on 22nd October 2017, at the Royal College Union Skills Center and Vajira Child Development Center respectively, with the participation of Rotaractors from the Rotaract Club of Alumni of University of Moratuwa and Rotaract Club of Faculty of Management and Finance University of Colombo.
The Joint meeting was hosted by the Rotaract Club of Alumni of University of Moratuwa and it was carried out as the third and the concluding session of the first phase of their project “Together as one”. Meeting commenced at 12.00 p.m and the head table was occupied by the Presidents and the Secretaries of the two clubs. The meeting was called to order by the President of the Rotaract Club of Alumni of University of Moratuwa, followed by the Rotaract invocation, four – way test and the Rotaract song. Subsequently, the Secretaries of the two clubs presented minutes of their last club meeting.
President of the Rotaract Club of Alumni of University of Moratuwa, Rtr. Himantha Alahakoon thanked everyone for being a part of the joint meeting. Afterwards, each club enlightened the gathering by presenting details of their ongoing and upcoming projects.
Rtr. Shanika Sandeepani from the Rotaract Club of Alumni of University of Moratuwa, introduced the project “Share the Joy”, a unique project of the club which focuses on community development through sharing love and affection with those who need it the most.
On behalf of our club, President Rtr. Akhila Wijethunga thanked everyone for attending the joint meeting and Rtr. Kanishka Balachandran shared updates of the project “Glass Ice”, a Professional Development workshop which will be happening on the 16th of November 2017.
After sharing information about upcoming projects, the meeting was successfully concluded followed by the National Anthem.
After concluding the meeting, we arrived at the Vajira Child Development Center situated in Pitakotte, at around 3.00 p.m, in order to carry out the project “Share the Joy”. Our main intention was to share love, joy and happiness with the children.
First, we gave the little ones a chance to fill their tummies by providing them an evening snack. While they were busy enjoying the snack, we started conversations with them. They were friendly to the extent that they mingled with us as if we were long known best friends. They shared with us their stories, memories and life experiences which made us realize how brave and smart they are to face those challenges at such a small age.
Afterwards, was a small entertainment session where we sang along songs with them. Then, we distributed gift packs, which brought-in a humble smile to their faces. Dry rations & other necessities were also donated to Vajira Sri Child Development Center which marked the conclusion of the event.
After spending nearly two hours, even though everyone wanted to stay a little longer, we bid off goodbyes to the little ones with the promise to visit them again.
We would like to take this as an opportunity to thank Rotaract Club of Alumni of University of Moratuwa for inviting us for the joint meeting and for giving us the opportunity to be a part of project “Share the Joy”, which added a memorable experience to our lives.
We are looking forward to be a part of the next Joint Meeting and Joint Project!
Written By: